Every teacher realises when a student produces work that does not belong to him or her. The style is just wrong, and usually too well crafted, plus the concepts being presented are out of keeping. Clever students realise that they have to do something to turn a piece of plagiarised writing into their own, for example reintroducing mistakes.

It is not racist to say that some of the English style that comes from the Nigerian press is clumsy, at least to our eyes, and indeed individuals have their ways of writing and speaking. Every individual has a more or less academic style, a more or less official style and a more or less informal style. We all do this, but the give-away is always there.

This is why the latest document out of Nigeria to persuade others to have The Episcopal Church (in the USA) repent of something, or other or have the Anglican Communion split, raised some doubts by the sharper eyed that it actually came from the stated author Archbishop Akinola of the Church of Nigeria (Anglican Communion). It just was not his style, nor the Nigerian style seen in its press, even though when it first appeared it was a formatting mess on the website and had to be reproduced. Then someone got hold of the Microsoft Word document used to produce this document, a document that first appeared with paragraphs missing and had notes without references. The Church Times claims that the MS Word document shows 600 or so edits by the Nigerian made Bishop Martyn Minns, and even touched up by Chris Sugden - he's the one rumoured to be made a bishop sometime in the near future (for the benefit of the English Anglicans should it be thought they also need a Nigerian incursion). So far Chris Sugden, who runs Anglican Mainstream, has not denied any involvement, though the press chap (and look at his writing!) from Nigeria says Chris Sugden did not touch it.

It is normal collaboration, we are told, that busy Archbishops have their staff to write documents for them. Yes, except that Martyn Minns is excluded from the next Lambeth Conference 2008 (or he is at the moment) and he is part of a political and religious right wing attack on The Episcopal Church. He has an agenda too, in other words, though no doubt Akinola has come to a conclusion to walk from Lambeth and, in the eyes of some, like the Archbishop of York, cause a schism. The issue is becoming, however, whether that many other provinces will go with him, and this is why some would say Akinola's going might not be a disaster if he (and those who join him) leaves behind a more tolerant Communion consistent with Anglicanism in general.

Anyway, given that the intelligent student with a ghost writer reintroduces their own style back into a written piece, I have some advice for Sugden and Minns, shown above, when it comes to writing anything for the Archbishop of the Church of Nigeria (Anglican Communion). 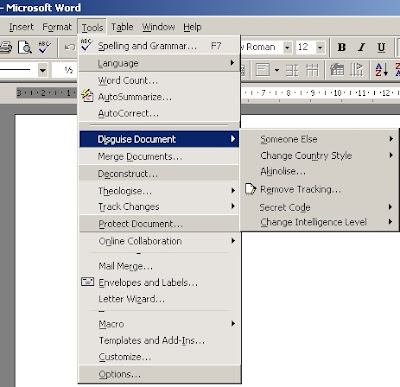 Posted by Pluralist (Adrian Worsfold) at 05:11