A week to go and counting, and suddenly today I firm up considerably in voting for the Liberal Democrats.

This is despite Tim Farron's weaknesses and lack of impact: but then, there is always a team. 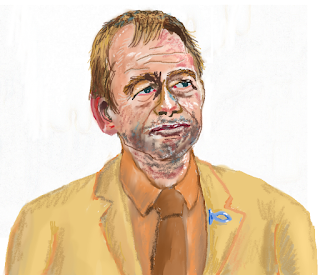 It is also despite the Liberal Democrats having a manifesto for being in the opposition, demanding another referendum after someone else has negotiated.

It is also despite Jeremy Corbyn having a very good campaign and me agreeing with many of his policies. The manifesto is good and positive.

However, on Thursday Jeremy Corbyn introduced his team to negotiate to take us out of the European Union. As a team, they are considerably better than the Tory team and its potentially reckless result.

But I asked myself a question. Can I vote for a party - give a positive vote - for a government that will negotiate to take us out of the political European Union? The answer is simply no.

Where I live is a monolith Labour seat. I do not like the Labour candidate, who never even replied to acknowledge my letter sent to him. He is also anti-Corbyn in past behaviour, although a weakling version. In our rotten electoral system, my vote for Labour stacks up a given vote already, and I don't want that particularly. I can vote for my first choice, and it is Liberal Democrat.

As I say, in a marginal, and there are more of these, these days, whether Labour held last time or Tory held, I would vote Labour.

Now the argument is that in la la land, if the Liberal Democrats won, they would be having to argue to leave. I don't believe it. I don't believe that their manifesto is anything other than an opposition manifesto. If it was for government, they'd be more explicit.

However, there is still a week to go, and events can happen.

What is clear is Theresa May has been found out. She is wooden and we haven't a clue what she'll really do. She seems to have contempt for people and animals in equal measure. The arrogant and disastrous election campaign follows uncertain government that still picked on the poorest. They are trying to put the wheels back on the election wagon, and of course they may do so. The press may be very ugly on the final night, and we expect that, to try and prop up the Tories. However, this bunch was never going to get my vote. The question was who should and I'm firming up to my first choice.

If I lived in New Holland still, I'd vote Labour. I did in 1997 when the Tories had to be removed, and I did here in East Hull to punish the Liberal Democrats for their actions in coalition. Where I live now, still in East Hull, I'll vote for them this time. I think.

Posted by Pluralist (Adrian Worsfold) at 02:40