Less than a Week to Go

Less than a week to go before polling and where are we?

Corbyn is still having to fend off questions on antisemitism which, overblown or not, is sapping the life out of the Labour election campaign and still raising questions whether the number of Labour MPs won't shrink.

This is no good to anyone, partly because a weak Labour Party allows a majority for the Tories even if other parties do well. Sometimes one thinks that Labour should have seen this coming, and for the sake of the Labour Party Corbyn should have resigned, even in favour of another left winger. Failure at the polls means it's too late: they should have acted by now. 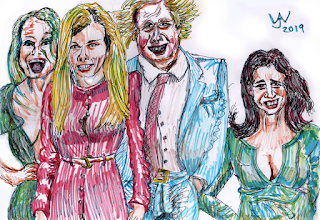 The Tories and, in particular, Boris Johnson won't stop lying, and giving slogans, but he just seems to be getting away with it. May's repetitive slogan was her undoing, but Johnson has the coherence of the Brexit vote behind him, especially as the Brexit Party continues to disintegrate. The communicability of the amoral conman must work or the conman has nothing. He won't be interviewed by skilled interviewers because the conman looks for the line of least resistance, and does not care about scrutiny.

The Liberal Democrats nationally have failed to cut through. It launched its manifesto when Prince Andrew was in a lot of media trouble, and it seems barely able to push through. The Remain Alliance seems to be weak as an attractor. Whatever happened that generated the million strong marches for a second referendum? It's as if the Brexit side of the argument is getting a free run, and people on my side of the argument are going down to defeat.

There are few days now to turn this around, and the next leaders debate again excludes others.

Posted by Pluralist (Adrian Worsfold) at 06:37