So what language/s did Jesus speak? The first and most obvious answer is Aramaic, related to Hebrew but not Hebrew, though Hebrew is one language of scriptures. His dialect would have been Galilean Aramaic, a bit rough at the edges, and also regarding Peter. The question is, though, did he speak any other language?

Jews in dispersal used Koine as a common language between them, whatever else they spoke. Many came together each year as Passover. There are a number of doubful meetings between Jesus and others that, with no translator, would have meant a necessity of him speaking Koine, the common Greek of the time. 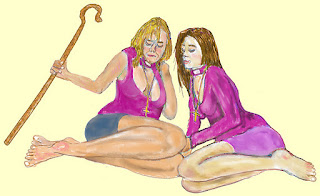 Despite his whole mission being of Jewish culture and end-time, and his focus upon them, there were suggested meetings between him and some Gentiles. No Roman centurion would have spoken Aramaic, though Matthew 8:5-13 is unlikely to be historical. One rather doubts much of the sequences leading to the execution, as if Pilate could be bothered. But again direct speech needs Koine. If they did, soldiers mocking Jesus at the cross would have spoken in Koine. But before all this, any meetings with Gentiles - like the woman who caused him a rethink - meant speaking the general language of the whole region and beyond.

The Septuagint is the Greek language Bible, as not everyone could understand Hebrew.

It is possible that some sayings originated in Greek.

So we know Jesus used Aramaic; he might have understood Hebrew, but he probably did also understand Koine. Jesus was a builder, but in family terms he was the one who got religion more than most, and would have studied scriptures the most, and for that needed communication and languages. In joining John the Baptist's (possibly related) group and then leading it after his demise, he needed to communicate with other Jews and possibly even some Gentiles and to do that Koine was necessary.See Campbell, Steuart (1996), The Rise and Fall of Jesus: the Ultimate Explanation for the Origin of Christianity, Edinburgh: Explicit Books, 58-59.
Posted by Pluralist (Adrian Worsfold) at 19:15

Perhaps even more interesting than whether Jesus spoke Greek was whether his time in the wilderness was contemplating a Platonic vision of reality, leading him to proclaim the kingdom of God.

Greek temples and philosophy were starting to become known in Judea, so if the Greek language were known, that might be indicative of contemporary Greek thinking too.

Sepphoris was only four miles from Nazareth in Jesus's time, walking distance. It was the capital of Galilee, a cosmopolitan Jewish-Hellenistic city. If Jesus was a carpenter or builder, it's likely he did business in Sepphoris. As you note, the common language of the area was Koine, so Mel Gibson's having Roman soldiers in his passion-porn flick speak Latin was probably inaccurate.

Probably good Greek. When we visited Cairo, the Copts told us they were certain that Jesus grew up in Egypt. Why not? Joseph sought asylum there, a good chippy is always welcome on any site and new Ptolemaic cities were going up in the Delta. Archaeologists tell us skilled artisans lived well there. Why leave a good job in this lovely, rich, wet area to go back to Judea? For me, Jesus may have got a job as an assistant in the biggest library in the world at Alexandria.
Speculation, but so is the orthodox account in Sunday school lithographs.