What an excellent idea, the best since someone produced The Golden Treasury of the Bible. It is an intended, conservative-political (as understood in the United States) rewrite of the Bible.

Peculiarly, what Americans call Conservative, we call Manchester or Economic Liberal, so that what they are against is the Social Liberal, the Progressive and Social Democracy. Conservatism in our country has been the preservation of traditions, and not to remove what works: the Thatcher government was not Conservative and certainly not One Nation Conservative, but Economic Liberal.

One of the problems now is that we have Conservative Party David Cameron in coalition with Orange Liberal (towards the Economic Liberal) Nick Clegg, though Clegg leads a mainly Social Liberal party. At the last Liberal Democrat conference he kept referring to liberals and liberalism as if the Social Democrats had never merged with the Liberal Party, and they were not exactly left wing and liberals have a successive progressive tradition.

The stupidity of the project applied to the Bible is that such thought in it is precisely NOT the thought forms of our present day. (Was it not Thomas Jefferson who produced a Deist Bible with miracles removed? What a plonker!)

According to Economic Liberals, the True Economic Bible [I shall call it] includes these messages:

By choosing a manger for his birth, Jesus's parents showed how poor people can afford cut-price accommodation. Let's face it, there is Travelodge. Animals can keep the poor warm. Also claiming that only the mother was a parent reduced the liabilities of the working father but he still took responsibility and provided maintenance. He's not like today's absent fathers and they do the deed! Non-dad Joseph of course made the crib himself and produced some repairs to the stable in barter for their stay.

The birth was in Bethlehem so that Joseph and Mary could register as right wing voters, and they ran from the Stalinist Herod - but had Jesus been a bit older they'd have faced him down.

The boy got himself a private education amongst the best RE teachers; so he showed initiative.

When Jesus was a youth, Uncle Joseph of Arimathea gave him a thorough training in self-reliance on a boat travelling to Britain, and thus Jesus established the first Christian church here; his non-dad also gave him a trade as a builder, so that all ministers of religion should be self-reliant.

Jesus was hopeless in his home town and it is quite right that the young should travel away to seek their life's fame and fortune. Yes, he did heal the paralytic in Capernaum who went on to compete in the regular Olympic Games. Jesus also healed a paralytic at Bethesda, which is proof that he visited North Wales along with other more southern parts of Britain. Bethesda of course has a non-conformist chapel free of left wing ritualism.

Jesus collected disciples from among the self-employed and hard working population. No one on benefit joined Jesus's crew. 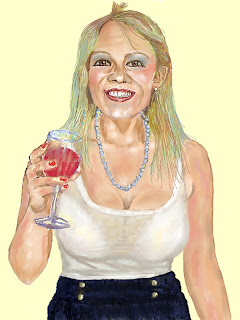 By turning water into wine Jesus saved the sponsors of the wedding party an unnecessary expense. He saved the best until last so that those who remembered the drink when more sober went out next time to buy cheaper plonk. If Jesus was bodily alive today he would supply 'Tesco Value' wine that, when drunk in quantity, would be become better than the best French wine - and that would teach the European Union a thing or two for pursuing socialised capitalism.

Mary Magdalene paid her own way, and the boys showed how important it was to have a domestic female servant so that they could concentrate on doing the external work. She lit the fires, did the cooking and provided other favours. She thus made sure that when Jesus said he loved John, he meant only that John was just his best mate and that they could play the divine game of golf together (where Jesus resisted temptation and did not get a hole in one every time).

The story of the five loaves and two fishes demonstrates about cutting back on welfare for the poor: let them eat the barest minimum; indeed, the best welfare is that which fills the baskets back up again. Marie Antoinette was an avid reader of the True Economic Bible but the French forgot all about it when it came to setting up the European Union.

When Jesus walked on water it saved him having to hire a boat and it was quicker: Jesus shifted across that lake faster than Roadrunner. It demonstrates not having to rely on others for oil.

Jesus showed through his healing that there was no need for a National Health Service, or at least it could be privatised to volunteers like him (who did it for free or small donations). Jesus even opened his own Ear, Nose, Eye, Throat, Foot and Demons consultancy, showing the importance of the unpaid sector. He saved others and himself much on National Insurance and private insurance and then there was the miracle of the crowned teeth.

Jesus showed the strength of voluntary education when the Gentile woman seeking some medicine for her daughter and not a kennel for a dog changed his mind and he learnt something new. Educators have used this incident as a definition of learning ever since.

Jesus advocated modern agricultural methods by having the swine jump off the cliff all at once. Cursing the fig tree speeded up recycling agricultural waste for next season's manure.

Jesus produced the miracle of the spring so that Zebedee so equipped could bounce into The Magic Roundabout.

Jesus produced the miracle of camels walking through the eyes of needles and told business men to go and do thou likewise (he particularly liked talking in King James English).

Jesus said, "My Kingdom, My Kingdom, a horse for my Kingdom," and so he got a good deal with Mr Shanks and thus walked throughout his mission except for the donkey bit.

Jesus showed how to save on heating bills by eating some Ready Brek and climbing a mountain, where he glowed and kept everyone warm.

Jesus picked up a small piece of stone and, making it square, pushed it into a wall after which lots of coins with Caesar's head appeared and he said Caesar should do what Caesar does but actually do a lot less and then there could be more one armed bandits.

Jesus knowingly arranged with Judas the collection of thirty pieces of silver so that it fulfilled a biblical prophecy, and then this helped towards court costs and thus shows no need for Legal Aid.

Jesus was an inventor, like he produced the first superglue as when a disciple chopped a soldier's ear off and Jesus stuck it back on. This is an example of producing added value, as from then on the all important military had better treatment for wounds.

Resurrection was a way to avoid the effects of injuries (and insurance claims against the Romans, lots of adverts at the time) and save on health costs, extending his own life. Not being selfish, Jesus had raised a few others too, although they may have gone on to die again.

Being resurrected saved the tomb space for someone else, and so the wealthy Uncle Joseph of Arimathea could collect some death rent from another occupant's family. This is an efficient use of space.

When the boat caught a lot of fish on one side this was a principle of making a clear economic choice for which there was a major increase in efficiency. Earlier, in a remarkable miracle called 'paying your way', a fish actually paid Jesus for being caught when it produced a coin in its mouth.

The Ascension was a cost free way to dispose of the transformed body and an example again of self-reliance. It is also an example for a privatised space programme to replace NASA.

But then, of course, parables are meant to be flexible and mean what you take them to mean.
Posted by Pluralist (Adrian Worsfold) at 04:16