Justin Welby as Archbishop of Canterbury seems to be doing some creative fence-sitting in his new role. According to the Yorkshire Post (which obviously sees a need to report this) he has said, in Mexico:

"On one side is the steep fall into an absence of any core beliefs, a chasm where we lose touch with God, and thus we rely only on ourselves and our own message.

"On the other side there is a vast fall into a ravine of intolerance and cruel exclusion. It is for those who claim all truth, and exclude any who question."


The quotation is accurate enough if in reversed order and stripped of context but ought to be read as given:

It is a dangerous place, a narrow path we walk as Anglicans at present. On one side is the steep fall into an absence of any core beliefs, a chasm where we lose touch with God, and thus we rely only on ourselves and our own message. On the other side there is a vast fall into a ravine of intolerance and cruel exclusion. It is for those who claim all truth, and exclude any who question. When we fall into this place, we lose touch with human beings and create a small church, or rather many small churches – divided, ineffective in serving the poor, the hungry and the suffering, incapable of living with each other, and incomprehensible to those outside the church.

We struggle with each other at a time when the Anglican Communion's great vocation as bridge builder is more needed than ever.

The context is the Anglican Communion, and the reference to cruel exclusion could be a reference to some African Anglican Churches. The first danger then of no core beliefs might be a reference to Western Anglicans. In Mexico he was giving a sermon on a certain Jeremy Taylor, who was ducking and weaving during Cromwell's time, and who apparently promoted the notion of tolerance. According to the Archbishop, Taylor had said:

"It is unnatural and unreasonable to persecute disagreeing opinions: ... you may as well cure the colic by brushing another man's clothes. Force in matters of opinion can do no good, but is very apt to do hurt..."


The tolerance Taylor advocated was lost in the context of Presbyterians in the north of Ireland when in fact he forced the Restoration to the Anglican Church (and forced Roman Catholics to attend too). 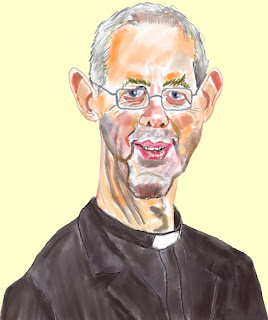 The emphasis of this Archbishop seems to be on those current appalling African Churches and other intolerant institutional expressions. But, taking what looks like an aside, why should an absence of core beliefs be the same as losing touch with God?

Walking in the Light, which he commends, is also a Quaker concept. And whilst Quakers might have core actions, they arguably no longer have core beliefs. If one has a notion of transcendence, or transcendent values, then these are bound to be situational and reflective and of some considerable potential breadth.

So far Justin Welby is tolerated himself for being a clearer talker than his strained 'turncoat' predecessor, but it seems to me it's the same codewords and nods and winks, fence sitting and the like. His greater problem faced is Anglican irrelevance but that is not due to an absence of core beliefs but something that in some places produces a Church of enormous arrogance and cruelty and in another place a Church that cannot adapt. Perhaps the Anglican one that has (not, actually) lost its core beliefs in the United States is the one that is most coherent and tolerant. It just was never that large at its beginning. It is noticable that in the USA, if not in Britain, the Unitarian Universalist Association is maintaining slow growth, and it deliberately does not subscribe to core beliefs.

Posted by Pluralist (Adrian Worsfold) at 21:12