Interesting, the British Religion in Numbers findings (via Thinking Anglicans). First of all, concerning 25 years 1980 to 2005, even a glance at the diagram shows that church attendance dropped by some 40%. We know also these figures are too optimistic. I remember doing a survey of a council estate where religious observance was minimal, and for all our efforts we got returns suggesting that attenders would be queuing round the block. Assuming regular optimism, the drop is quite startling.

One of the biggest drops is for Roman Catholicism despite the influx of the Poles. Clearly it is scandal-ridden and is paying the price for its tendency to control over that to serve, over its international abuse of children that the hierarchy covered up. Anglicans retain about the same percentage of the diminishing market. I am interested in how the United Reformed Church and Methodist Church are doing, to see whether there is likely to be structural ecumenism brought about by structural collapse. The Methodists can most easily take on bishops as they don't count the number of divisions in the ministry, and have Chairs of districts who are bishops in embryo, but the URC presumably thinks there are Presbyters and Deacons. Perhaps I am wrong.

From 1980 to 2005 there was a 63% drop in URC attendance. I wonder if this includes their taking over independents in Scotland. There was a 52% drop in Methodist Church attendance. These figures are pretty catastophic. So if we take these figures and keep going... That's 150,488 in 2030 for the Methodists and 48,231 for the URC, with the Baptists much higher given their lower drop rate.

Such a calculation doesn't do justice to reality, partly because closure and disappearance can have a gathering effect: disappearance from public view intensifies.

Looking at places of worship the number of churches in the URC dropped by under 7% (again does this include takeovers?), and the Methodists were down a shade under 6% so this means that their churches are emptying.

The Society of Friends closed just one (really?) and the Unitarians lost 4. 176 is about right for now, 2012, though number are moribund and occasional; anyhow, I remember an optimistic figure of 7000 members in the mid-eighties and it might be 5000 now or even less. The problem with the chapels count is it gives no indication of how they are filled. In the mid-eighties York was on the verge of closure with about 6 people attending. It's now doing very well. In the mid 1980s Hull was reasonable, in the 1990s doing well and now it is not threatened but struggling. Unitarian churches can bounce up and down rapidly.

What will keep Unitarianism bobbing along the bottom is its increased profile thanks to the Internet, with people like me, and its Unique Selling Point (USP) at one end of the religious spectrum. Unitarians are unashamed go-where-you-will liberals. 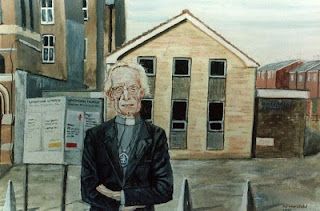 I still note the mix between someone who has searched us out and made a decision to walk through the door and the random caller (even if it is also an effort to come through the door). I would never have come through the door in 1984 had not the Baha'is used the building, and probably I would have continued with Anglicanism without deviation and handling the problem of being too liberal. In Hull now we are trying to get the internals right before doing the externals, that is employing methods of greater publicity - although a new member is changing the website. There is music (largely done now), ministry (about to push harder) and the building (about to get a series of changes made that will rearrange its parts and slightly expand it).

I am sure the URC will want to retain its two orders of ministry, but it is a bizarre argument to maintain for a time that cannot understand such arguments. The Methodists surely have no USP now, or at least I cannot think what it may be. 'As we like it' is not an argument.

The Quakers and Unitarians ought to merge, but the Quaker practice and its commitment against professional ministers is so distinct that this is impossible. They and the Unitarians have reached the point of no return.

It is possible to see a future where the Church of England has a straight fight between Evangelicals and Liberals and the liberals lose. We might then see radical change and denominational rearrangements. The problem is that this defies history. First of all, as Theophilus Lindsey discovered, Anglicans didn't follow him and they tend to stay where they are. The living is too good and the alternative connections still too numerous. Secondly, the Anglicans that do leave are usually the more doctrinal and more activist: it is the mixed and liberal that stay behind. It is the traditionalist Anglo-Catholics who have upped-sticks. So Anglicans will feed and continue to feed the growing Independent Churches, like the big urban media churches that suck away evangelicals and charismatics. It may be that in the future smaller numbers of larger Anglican churches get together and arrange the finances to throttle out the liberal subsidised, but they'd have to be clever. So far this is extra-systemic and via entryism, and yet to be prominent, and that usually leads to departure.

Still, at present sizes, it doesn't take much change at the minority end of the market to pump up the Quakers and Unitarians.

Personally I doubt that the Anglican Covenant coming into existence will make much difference to people leaving the Church of England (or the Church in Wales, Scottish Episcopal Church or Church of Ireland). Although it will end for a very long time any prospect of social inclusion in ministry and blessings (because of the role the Church of England plays internationally), liberals usually compromise and put up with things; they even continue to obey the rules unlike their evangelical counterparts (who break many liturgical rules, for example). On the other hand, liberals have started owning the label and have been speaking out, whereas they used to just mumble and mutter in corners, so such a restricted future in the Church of England might cause some to go elsewhere.
Posted by Pluralist (Adrian Worsfold) at 05:24

Isn't it time we started asking why we're losing members, rather than just noting that it's happening? I'm sure you're right about the RC's losing people because of scandal. In the Methodist Church, I know a lot of people leave because of bad, often exclusive or domineering, leadership. What other factors could there be which repel people, and how do we put them right?

Where to start. The problems are so deep. First, the whole protestant service format and style puts many seekers and spiritual off. We really need more of a circular approach. Second, the leaders must be facilitators so every congregation hears a wide range of views. There must be more art and symbolism, quiet and music. The church as community needs more emphasis, going out of the door if possible and whatever the distance - what this church has to say to this town. There needs to be more central direction of ministry, more regional support. The churches need to match the publicity.

How about by asking the people who left?
I'm always amazed that churches just seem to be happy to see people fade away instead of having a proper programme of following up.