How would I summarise the advice of all the lectures and workshops at Great Hucklow?

First of all, posters have to stop somebody, draw them in to read more detail, have sufficient but not too much detail to make contact, and end up making contact. A bad poster without a striking image or graphic won't pause anyone, and then bad fonts and contrasts won't allow that initial reading. Lack of sufficient information won't give enough information and absence of contact details won't allow the landing of the reader. It is not a question of balance but design. 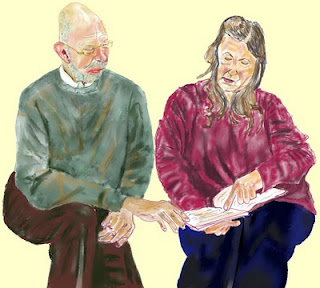 I have taught desk top publishing before (and a rotten early version of Microsoft Publisher). I remember the importance of white space. Regrettably a lot of teaching these days is by bullet points in Microsoft Powerpoint or equivalent, and some of the same principles apply (although a poster equivalent in terms of grab and detail can be spread out over several slides). If I did a poster I might use some of my own artwork - but would it put some people off?

The press (and TV) need copy and might not have many journalists: so write it out. Give a quirky title and lead word in the first paragraph that would capture attention. The first paragraph gives the essential detail. Subsequent paragraphs add information. Final paragraphs might be the most general information with a notes for editors sense about it (e.g. a description of Unitarianism). Attach a photograph and send by email, and directly to the reporter if there is one. If a news item happens instantly, use the mobile phone to get something directly to the media.

I remember teaching students to produce reports, and these work in the opposite way round to a 'built-up' essay. The argument is made later; the conclusions come first.

Radio presentation needs preparation and self-discipline. A script for two minutes may be a page and a third double spaced (on one side of the paper). Speak and don't hesitate and make the diction clear. Don't fidget, tap the table, rub your clothing and don't staple the pages. Commercial radio is tightly timed and can interview to edit for perfection. Contact via a producer but establish a rapport with the presenter.

At hospital radio I stuck to a script like a presenter rather than a disc jockey. When I went and did a report on Channel Four's Right to Reply in the early 1990s, I found I could not get the "staccato voice" that was recommended there: my script got me a trip to London and I was as if the news anchor doing live reporting to myself in various pointless locations (as if someone is going to come out of Buckingham Palace). I still didn't have it this time at Great Hucklow either, whatever kind words a professional like Reverend Bob can say. Indeed he said to me that he had some elocution lessons so he could do marketing early in his career, and so his Scottish accent has a particular clarity.

Unitarian Communications collects up some blog posts; there are two blogs by Louise Rogers (pictured above with Rev. Tony McNeile): one following her interest in governance for Unitarians (she conversed about the lack of top-down strategy from those placed to see the larger picture) and all about developing spiritual communities (which, for some unknown reason, will not be accepted on to my 'Reading' section here).
Posted by Pluralist (Adrian Worsfold) at 02:09

Well I do like the photos and thanks for restating the tips. I am still working on my leaflet