Recently Rowan Williams gave a lecture in Wales on the common good and turning a society into a community. I'll simplify it and then comment from my perspective.

Rowan Williams has a good view of community. He first uses negatives as to what holds community back. 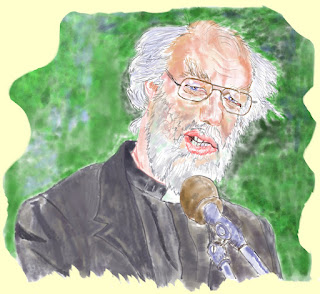 Too much income inequality pushes against community by generating discontent. Managerial and functionalist approaches to organising society - e.g. reducing education to being about skills alone - takes from the three dimensional nature of individuals and the community life that results. Education should promote self understanding (I would add it should promote learning for its own sake and towards criticism). Such functionalism includes commodification, of buying your inequalities, and it reduces human diversity. Later he mentions the public goods of sport and the arts (neglected in education as training). The next negative is the downgrading of public benefit - I'd put it as that which comes from public squalor or the notion that the public sphere is unproductive. He says leaving things to the market undermines the full sense of mutual responsibility. But he also criticises a passive welfarism, of leaving things to the State, where you get dependency as it undermines the responsible, active and creative.

Later he calls much of this economism: The British right (he ought to mean New Right) have been found lacking and economism is reductionist of the person. The Fabians, however, were too top down and non-local.

Later he sees these values in a potential broad educational framework. He finds it in the broadest and best sense of the Welsh co-operative movement. Being a blood donor is a case where supply meets demand on a purely non-economic but communitarian basis.

He prefers economists like Michael Sandel and especially Partha Dasgupta, who attempts to include environmental cost and cost to corporate wellbeing. You have to first have a belief about human beings, and you can get this from some economists and theologians. He adds Robert Skidelsky, Philip Blond of the Red Tories and John Millbank of radical Orthodoxy, and at least the title's insight of One Dimensional Man by Herbert Marcuse (if not his solutions). As a theologian he produces an anthropology, or as such a doctrine of human nature.

The Church might be a friend of government that promotes community. Community involves responsibility for one another, and a very strong moral sense the human being.

This is joined with the practice of citizenship that involves responsibility of one for another. He finds this in his scriptures, as in Hebrew society or Paul's organism of interacting parts.

He thinks the doctrine of a three dimensional human being and citizenship can be promoted by the Welsh Assembly.
So that was his lecture, simplified.

I come at this remembering what it was like to live in a community. This was a village of 900 people where everyone knew of everyone else. There were rotten families and good families. Knowing who were the local bad youth might suppress some of their activity, but only with police involvement (in the end) and there were fault lines of disputes running for years, legal actions and personal animosities. Gossip both oiled the works and was destructive.

My point is, before people start to claim community is a good thing, with a moral tone and reciprocal solidarity (and action), as Rowan Williams does, they ought to think further about how human tribes form.

The fact is that there is a freedom in at least some anonymity. People like suburbs.

His lecture is also in some contrast from his previous consideration of Sharia Law. That was about community too, but a separated out multiculturalism of communities. This law applies to you, but not to you, and such was seen as oppressive upon those who would have to make a special attempt to escape such additional law.

My point is that individuals need protection against communities, and that this is also a doctrine of the human. We have, at times, a right to remain silent. Human rights are right too - and right to focus on the centres of consciousness and sentience (extend this beyond humans).

My doctrine of humanity starts not as a given - that is what doctrine is (like in the zap of revelation) - but as a phenomenology. The phenomenology, the irreducible, is consciousness, and that I am that can say I am, my knowing that I know. That is where the pain is felt and where the pleasure is felt, and knowing it. Animals have a more limited sense of knowing what they know (doesn't make pain any less felt, but they can't build a library from it).

Community no doubt enhances the richness of the I am and knowing I am, as it reminds each that he is and she is what I am too. It is through community that you get the broader and non-economic riches. Communities build collective libraries of memory and the imaginative. It is through others that you express responsibilities but you also have rights, and your rights are as much away from other people as in amongst them.

Humans are tribal, and that's our sociolbiology. But tribes create divisions, and the religious aim is not so much enhancing the tribe, which is easy, but protecting the individual from the oppressive tribe and in creating bridges across tribes that can all too easily separate and go to war.

Thus at one and the same time, I promote the individual and the interfaith. The community all too easily reverts to the bureaucratic. Weber's dead hand isn't just about a narrow view of people: he was well aware that we added more into social life than some narrow Marxist causality or purest economic liberalism. We have to guard against pure rationality too. That's why my tradition, as well as promoting the individual, and the bridge-building, also came to question religious rationality and jumped upon the riches of the transcendental and romantic too (at least to some degree - there are dangers in too much that is imaginary and then delusional).

Rowan Williams does not tackle the dangers of the collective; perhaps, today, the issue is the insufficient collective. Maybe. But I'd beware.
Posted by Pluralist (Adrian Worsfold) at 16:22