George Osborne continues to screw the young and the poorest, but has carried out a few retreats, U turns and a Blairite spending review.

Instead of dishing out the pain, come what may, and exploiting a supposed weak Labour party in opposition, he's retreated to a less painful stance, with a reliance on cuts to Universal Credit and its philosophy to do his bidding.

But the news organisations keep missing why he might have altered the electoral cycle in economic terms. It's because whatever happens in the European Referendum, the Tories will then start to eat each other. Whether we stay in, or come out, the accusations will fly, and they are doing already about Cameron's fake renegotiation stance - one further weakened by his need to co-operate over terrorism. 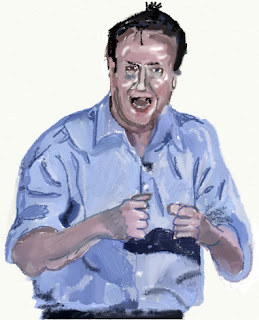 Whatever the result, the Tories will lose, but the loss by bad feeling might be delayed by the first sense that 'a decision was taken' and the losers losing. And that's the best moment the Tories can go for an election. If they wait longer, Labour might strengthen either behind the admirable Jeremy Corbyn or after some coup attempt within the Parliamentary Labour Party.

So I expect an attempt to repeal the Fixed Term Parliament Act,
where the Tories might find sympathisers elsewhere for a majority. At present the PLP and others might well be for its maintenance, plus a few Tories - in other words, it cannot then be changed. But it could well be repealed if it doesn't simply involve a return to the Prime Minister's decision to dissolve Parliament (an ability that derives from him being the Monarch's first minister - how Royal power continued to function).

Osborne is also positioning himself to take over from Cameron, and he will be keen to make this sooner than later, even if he is already acting as Chief Executive to Cameron as Chair. The 'Blairite' positioning is therefore now, deliberate and with the Referendum timing in mind. This government will want more than its effective majority of about 16, certainly as that will be gone after the Referendum.

I've resisted rushes to judgment regarding recent terrorism and related activity. My view is, suppose we (military powers) were decided and did clear out Syria and Iraq of the Islamic State, and set up areas where people could rebuild their lives (could be a good idea): what difference would it make to these ideologues operating out of European capitals and other cities?

As for them not being in any way representative of Islam... Well, the IRA used to compromise the Roman Catholic Church (among this Church's other morally dubious internal activities) but the IRA never fought in the name of Roman Catholicism. Islamic State does, and it is one of the children of the Wahabi type approaches to Islam exported from Saudi Arabia, essentially one of the products of Western Imperialism. The Qur'an contains some pretty nasty texts, as does the Bible and even the Bhagavad Gita set in a civil war scenario has Arjuna telling Krishna that it is his duty to fight. The 'religious classics' as David Tracy has them can motivate in multifarious ways. So it does matter that Muslims condemn Islamic State and why, just as Christians ought to condemn the Klu Klux Klan and any form of Christian based ethnic superiority (take the Yugoslav break up as a time when such did not happen). Islam - Salam - should be a religion of peace (with conditions regarding its freedom to operate) but it is, unfortunately, up to Muslims to proclaim this.

For too long, since the Renaissance, Islam has had a chip on its shoulder. The 'final revelation' (also it believes it was the first) was superseded culturally and intellectually by the West. Things really went wrong after the end of the Ottaman Empire and some pretty silly boundaries for Arab and other States post World War I that ended up being ruled by political thugs. The failure of the Arab Spring is a failure of those States as conceived - Egypt should have done better. The result is that Islam continues to dig itself in a hold. For too long it has clericalised and intellectual centres in the east have contracted and been suspicious of Western Islamic intellectuals. Reform is now more than necessary.

The danger is that Islam gets regarded today as Roman Catholicism was regarded at the time of Elizabeth I. This would be tragic and unnecessary. It is already going that way in France, with its secularism tradition - thus Islam becomes a threat, thus extremists target France in particular. Islam is in need of a Reformation, just as a corrupt Christianity had to reform. If it doesn't, it will end up being the loser, it will lose moral authority. The reform has to relativise Islam, see the Qur'an as historical and not perfect, actually teach its content more widely to believers rather than its repetition, and tackle the questions around absence of archaeology regarding the founding years of Islam around Makkah and Madina.

This terrorism will pass because it is a condition of the current condition of Islam and political forces. The lunatics running this particular asylum are young and will rotate through. But the damage done to Islam could be much the greater, unless its adherents address the need for liberating reform - to attempt to return to that intellectual and artistic culture of its heyday, when it could tell an intolerant Christianity a thing or two.

Posted by Pluralist (Adrian Worsfold) at 16:39 No comments: