The Day We Lose Sovereignty

March 29th 2017 is a tragic moment in the life of the UK. It is when Theresa May, who once set out a cogent argument for staying in the European Union, fires a gun in the form of a letter to trigger Article 50 of the Lisbon Treaty, that could quite simply throw us out of the Union in two years. The reason why the Supreme Court said that this needed Parliamentary approval through legislation is that the letter results in exclusion. "Job Done," Douglas Carwell MP called it. 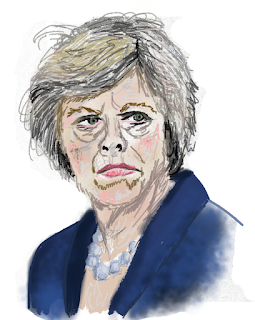 For some of us, and hopefully more of us as time goes on, the effort has to be that he does not get his 'Job Done': however, for the brakes to go on, it will take the agreement in unanimity of all 27 others in the Council of Ministers. To stay in will probably take a resolution across the institutions of the European Union.

By April the basic outline of the EU position on negotiating should be known, basically whether divorce settlement negotiations preceed trade negotiations. This is how much it costs to come out to meet obligations. In April the European Parliament should express its position as well. The Council of Ministers makes a formal view of its position end of April. Even then the rounds of negotiation, the chapter headings will need to be worked out. Between June and Autumn all this gets fleshed out by the Commission. And this gets us past the French and German elections. It is only in Autumn that real negotiating begins. How long will it all take? If it takes a year, that is long enough, because ratification is involved, and may well involve national parliaments.

The fact is that some governments, or parts of governments, would like to be shot of us, because we have always been the bad boy of Europe. Our influence has been expansion to many members and economic liberalism - which has not worked, set alongside a currency we never joined and never supported. The euro would have benefited from our membership.

The effect of coming out is to lose sovereignty, not gain it. The reason is that if we have all the trading benefits we had before, then we still pay towards them and the only difference is that we have no say in them. There will be this plus the cost of the divorce.

At the same time, a more unity-minded EU will evolve its democratic institutions. It knows about the democratic deficit. But with Britain out, it will be easier (even with some slow lane countries - and frankly, some fascistic tendencies in Hungary and Poland require two speeds at best) to make accountable processes at the centre. The EU will stay confederal for a long time: it will remain principally a co-operative structure with only some 'federal' elements.

So how to put the brakes on. First of all it needs political leadership from a core group that grows. This is now Farron, Clegg, Clarke, Lammy, Heseltine, Morgan, and similar so on. By-elections are likely to be shaped by the referendum. Labour, whose ambiguity and appalling ineffective leadership, hasn't helped but now promises "hand to hand" combat on the government achieving what David Davis, Exiting the EU Secretary, calls gaining the same benefits as we have now. Let's see, because this is going to be the rub of the opposition duty regarding negotiations from now on. Chief folks here will be Labour's Keir Starmer, Nick Clegg and, actually, all of the Scottish Nationalists acting with one voice.

The government for its part no doubt will keep things relatively secret, to reduce the effectiveness of the opposition.

Now I take the view that Theresa May isn't very effective. She can U-turn on anything, including her view of the purpose of political power. Having achieved power, she could have gone to the EU and said we had 52% out and 48% in, what can you do really now to meet our agonies of membership so that we can be in but loosely in. She could have made an appeal across the House of Commons and House of Lords. One more go or we go, so to speak. But no, she simply became someone else after the referendum result.

She's made a big mistake over Scotland. A Scottish Parliament, for that is what it is, has decided on having an independence referendum, with timing to know the terms of the EU exit deal. She is saying no, only after we've left. If I was Scottish, I'd be infuriated, on the lines of who does she and he (the Scottish Secretary) think they are? Once again it is the executive trying to buckle Parliament. Ah, Section 30 is in the hands of the British Government. Of course it is, but set against this is the democratic will in a representative democracy.

We are going to have to sort out the British Isles constitutional situation. The House of Commons is now utterly imbalanced. Instead of adjusting here and there, it needs a formal sort-out and reform that is comprehensive. But does the government have space for this?

Otherwise Scottish independence is the way to sort out much of the imbalance. There would have to be a Council of the British Isles, rather like the early European Economic Community itself. A place to co-ordinate by discussion and agreement. In this, Northern Ireland either becomes independent or goes south - independence would need the active support and engagement of both British Isles sovereign governments.

The fact is that we cannot come out of the European Union and retain a unitary State. This is because increasingly the EU was underpinning the British Isles politically, and the worst prospect is for the border in Ireland. How on earth is that kept relatively invisible with one nation inside the EU and one outside - unless one of them is outside but pays for everything economic inside except having representation? In other words, the British State loses its sovereignty.

The reality is that the best deal is the one we have, being in. By triggering Article 50, the negotiation may well realise that its either economic damage or lost sovereignty (or both). We then get enough people to see the light: the Liberal Democrat strategy of a second referendum on destination becomes the means to ask to stay in.

But it doesn't follow that we do stay in, because to stay in may come with conditions, rather like joining again - to no longer be the bad boy of Europe. And it turns out then that this Conservative Government under Theresa May will have been the most disastrous ever. Plus the Scots may be on their way to their own independence and control over how to manage their sovereignty. And goodness knows about Northern Ireland: unity across Ireland might be possible even with enough unscared Unionists in a modern, secular, EU Ireland.

Posted by Pluralist (Adrian Worsfold) at 05:57 No comments: