According to someone called Dan French, the Archbishop of Canterbury will be piloting a car-based reality series where contestants have to overcome fear inside a fast moving car.

The ABC took time off from his Anglican duties (shown here with the Archbishop of York blessing an idol as part of Fresh Expressions) to announce plans for a new format Reality TV series titled Crash Course, 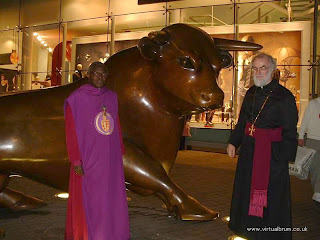 with a pilot being shot this weekend. It is part of his own contribution to Lent, where members of the public can appreciate what suffering is all about.

It is known that the Archbishop of York was very annoyed when he was thrown out of an aeroplane during a publicity stunt, but 'shooting a pilot' means only that there will be an initial programme to test the concept; hopefully no one will be killed.

The canteen at Lambeth Palace will provide some indirect inspiration: the ABC will join forces with the producers of the programme Hell's Kitchen.

The ABC is known for never having learnt to drive, and this may be related to a life as an academic and church insider and never risking himself out in the public sphere. David Virtue was keen to repeat the words of Theo Hobson about this closeted life:

He has never had to seek employment, or existential meaning, outside this world. He has almost always been housed by either Church or university, thus being spared a major form of worldly responsibility and angst. He happens never to have driven a car, another reprieve from dirty worldliness," wrote Hobson.

The new programme will do new things with cars "you would never imagine", said a cockney male comedian attached to the exhaust pipe of one of the cars to feature. But the programme will focus on the people. The ABC said:

"This is a pastoral programme, where I put people in the passenger seat and watch them scream a lot."

Count E. Cannabis, who will assist the ABC, said that passengers will have to endure the Archbishop's crazy untutored driving through the busy streets of Canterbury, going through hazards such as rain, snow, fog, and falling rocks from the Cathedral.

Quentin Crisps and Tilta Swindon will present the programme, as the ABC intends to give live poetry performances while handling the controls.
Posted by Pluralist (Adrian Worsfold) at 05:35

Do those of us here in the US get to see the shot pilot?

I think it is purely for export, so yes!

Heard Rowan Williams in Durham yesterday evening, when he lectured on books and reading. It seemed absolutely clear that both in his heart and in his intellect he is a Liberal Christian (not of course as
'liberal' as our host here).

Goodness me. If he was liberal as me there would be Anglican civil war. Oh, I see that there is.

It seemed absolutely clear that both in his heart and in his intellect he is a Liberal Christian....

It's not clear to me. Why don't I see him that way? Neither his brain nor his heart is visible to me, so I must judge him by his words and actions.

The reason you don't see him that way is that you weren't there on the occasion I was referring to. I am well aware that RW presents different faces (perhaps many different faces) in different contexts, and that he is often accused of precisely that. On this occasion, he was relaxed and before a non-adversarial audience. He was also talking very much in academic mode. When I made the comment I have made here to an academic who knows him well and who meets him at Patristic conferences, he said: 'Yes, that is exactly what he is'.

When I talk of 'academic contexts', I am not being snobbish. RW is, among many other things, an academic, and academics do, in their own pretentious and irritating way, pursue truth.

Also, I was, of course, in this comment trying to encourage 'liberals'.

John, I don't doubt what you say. Why doesn't he allow those of us not part of the academic milieu, see that RW? That's what would truly encourage us so-called "liberals".

Does the ABC have a touch of multiple personality disorder? I'm joking, but only halfway, because I'm confused.