Regarding the Primates' Meeting Communiqué, let's start at the back in the notes (regarding this Windsor Continuation Group input):

11. WCG Report, paragraph 101: ...Such a [professionally mediated] conversation would have to proceed on the basis of a number of principles: ...

* It is not for individual groups to claim the terms on which they will relate to the Communion.

* The leadership of the Communion needs to stand together, and find an approach to which they are all committed.

* Any scheme developed would rely on an undertaking from the present partners to ACNA that they would not seek to recruit and expand their membership by means of proselytisation....

Who's kidding whom on that one? That's the very point of the existence of ACNA - it is a replacement denomination: otherwise, why separate? Does Nigeria and Uganda (etc.) sign up to this restriction, given that the Primates' Council (taking authroity to itself) and the FCA were launched at the joyful Jerusalem GAFCON? The note 11 further states:

WCG believes that the advent of schemes such as the Communion Partners Fellowship and the Episcopal Visitors scheme instituted by the Presiding Bishop in the United States should be sufficient to provide for the care of those alienated within the Episcopal Church from recent developments.

Come on, come on. Not a chance surely. Yesterday's news in yesterday's chip paper. Here are some excerpts from some paragraphs:

9. ...The matters discussed are not solely issues of church politics; we are considering the spiritual health and well-being of our communion. It is therefore a conversation about our own lives and ministry.

10. ...Matters are not as clear-cut as some portray. The soul of our Communion has been stretched and threatened by the continuation of our damaged and fractured relationships...

11. The Windsor Continuation Group Report asks whether the Anglican Communion suffers from an "ecclesial deficit."[6] In other words, do we have the necessary theological, structural and cultural foundations to sustain the life of the Communion? We need "to move to communion with autonomy and accountability"[7]; to develop the capacity to address divisive issues in a timely and effective way, and to learn "the responsibilities and obligations of interdependence"[8]. We affirm the recommendation of the Windsor Continuation Group that work will need to be done to develop the Instruments of Communion and the Anglican Covenant. ...We affirm the decision to establish the Inter-Anglican Standing Commission for Unity, Faith and Order.

12. ...The moratoria, requested by the Windsor Report and reaffirmed by the majority of bishops at the Lambeth Conference, were much discussed. If a way forward is to be found and mutual trust to be re-established, it is imperative that further aggravation and acts which cause offence, misunderstanding or hostility cease. While we are aware of the depth of conscientious conviction involved, the position of the Communion defined by the Lambeth 1998 Resolution 1.10 in its entirety remains.

14. ...Significant concerns were raised in the conversation about the possibility of parallel jurisdictions. There is no consensus among us about how this new entity should be regarded, but we are unanimous in supporting the recommendation in paragraph 101 of the Windsor Continuation Group Report[11]. Therefore, we request the Archbishop of Canterbury to initiate a professionally mediated conversation. ...We recognise that these processes cannot be rushed, but neither should they be postponed.

15. ...Pastoral Visitors will be commissioned by him to conduct personal and face to face conversations in order to assist in the clearest discernment of the ways forward in any given situation of tension.

16. ...We believe the securing of the covenant to be a vital element in strengthening the life of the Communion. We welcome the Covenant Design Group's intention to produce a covenant text which has a relational basis and tone. It is about invitation and reconciliation in order to lead to the deepening of our koinonia in Christ, and which entails both freedom and robust accountability. ...a covenant text [is coming] ...which will commend itself to our Provinces because it speaks of the mutuality that should characterise the life of Christians and of Churches; of a relationship which exercises the self-limitation and gracious restraint...

Freddom and robust accountability. That's like have a square and call it a circle. This is more and more of the same that simply cannot hold. The centre cannot maintain its grip 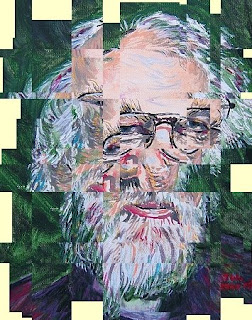 on a divergent Communion. This proposal, for an Inter-Anglican Standing Commission for Unity, Faith and Order sounds like more substitute Roman Catholicism, though in actuality it may end up more like an ecumenical gathering. Adding more central institutions does no more than stretch out the sticking plaster. Presumably it is needed if the Covenant lacks any teeth, or point, or purpose.

Why not simply let those who want to bless same sex relationships do so, and those who elect same sex couple ministers do so; let them who want to organise some purist Anglican sect separately do so and indeed prosletyse, and then see where it goes. Then set up an Inter-Anglican Standing Commission for Unity, Faith and Order to see where there are, and where there are not, areas for agreement and areas of difference.

Oh yeah, there were other things discussed like starvation, drought and world financial collapse...

Me thinks Changing Attitude has been a little optimistic this week regarding the change of focus, and that nothing has changed other than a further wrenching effort to bind a Communion together that has, in reality, already shattered, and ought to be allowed to settle and find its way on in rebuilding relationships in a pragmatic manner, sometimes based on faith-agreement, sometimes based on practical projects, and sometimes not at all.

Now, over to the Pope Benedict XVI, who we assume remains in office. After this, is he now going to offer the Traditional Anglican Communion and other Catholic hangers on at GAFCON and FiF a territorial prelature or not, to take them as a job lot? Or has ex-Anglican Bishop WIlliamson been a nasty little lesson? Or is this exercise in structural definition itself enough to keep him away from picking up the available pieces for the time being? Presumably the Archbishop will telephone the Pope.
Posted by Pluralist (Adrian Worsfold) at 19:39

Stay tuned for exciting new episodes of 'AS THE ANGLICAN WORLD CHURNS'.

Key points - the Covenant process is still the ABC's game and Lambeth 1.10 stands..... you're right, CA et al have been engaging in wishful thinking

As for ACNA and GAFCON - these are the reason for the stance of the ABC above .... if TECUSA has the guts to follow its principles rather than make some compromise (eg BO33) to stay in Rowan's club, ACNA and GAFCON disappear.... if they get fed up waiting, the ABC knows they are viable and large and can do without his endless meetings with no resolutions....but he is still holding their line so they are happy enough.... imagine Rowan Williams defending Lambeth 1.10 as the "mind of the Communion" and presiding over its continuing Communion status even today!

Listen to Venabales and Orombi. Saying they have the Christian faith and the others something else is offensive, and they criticise Aspinall. But they are right that the whole thing is divided, and they might be right that the dividing can be done in love.

Thye have signed up to ACNA not evangelising to replace TEC and ACC and I don't believe it for a minute.

point is ACNA won't be evangelising...it will be accepting applications fro parishes/dioceses to join..... but I agree with you that no solution has been reached (deliberately!!) - better to have a solution so all can get on with their lives and stop wasting time in-fighting