So what happened at the very first Easter? 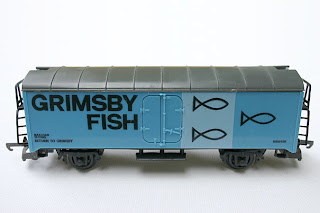 The answer is that none of us actually know. We don't know because there isn't the historical material. The historical material is a bit like the cosmic material of the expansion of the universe: you can see the expansion of the early Churches and you see some of the texts, but this is written as coherent theological narratives well after the birth of the Churches. Plus the texts we have are mainly Pauline influenced ones; there is little insight really into the Jewish Church that is arguably nearest Yeshua's (Jesus's) own mission.

The first thing is that the view outwards is not the same as the view inwards. Yeshua's crucifixion would not have made the news outside the community. Saul, for example, would have been in Jerusalem and not given the Roman judicial killings going on a second thought (other than the fear they maintain). The gospel naratives don't work: no blasphemy was involved, and at the very most Pilate will have pushed his pen to sanction the next lot to die. This is no epic event: the prisoner's are given some lashes to demoralise and weaken them, they are nailed up, and left to suffocate, taken down and the bodies chucked in some quick lime pit (otherwise the production line of bodies stack up and smell).

Secondly, there are several such healers, preachers and teachers, all going around and in the business of persuading God to get on with bringing in the end to oppression and the fulfilment of Israel.

The question is one of strategy and despair. How much strategy was involved, for example, in Yeshua being arrested? We don't know how Judas was involved (shared strategy, personal decision making) but Yeshua and crew made sufficient noise to be picked up and him despatched by the authorities. At this time the nervous edge-of-empire authorities would have watched all these outer groups with public impact coming into Jerusalem and kept cutting off their heads.

Yeshua's own message was that of a suffering servant 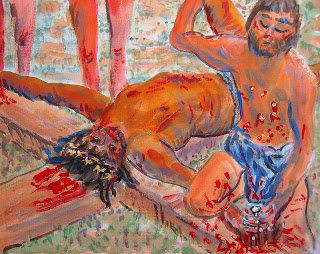 towards healing people of their sins - removing demons - so that they would not be ill and not die and would enter the coming Kingdom. Perhaps Yeshua thought he would have to die to demonstrate sufficiently to God to bring in the Kingdom: the Jewish approach is to act and be faithful for God to act. What would happen to him, the faithful servant?

We know there is the eschatology in the events of 70 CE affected the gospels, but it would be surely bizarre for Yeshua to heal and talk of the Kingdom if he did not believe in its immanence, and the notion must be that after particularly a suffering servant a messiah would come in on clouds of glory - supernaturally transformed - to clear out the Romans and all else. Here would come the day of resurrection for all, and paradise on earth, the end of time as understood.

There is some ambiguity in the texts whether Yeshua expects himself transformed or another to be the messiah, for which he is intimately connected in bringing forward. Son of Man is a difficult concept and has various meanings. Perhaps Yeshua came to think as his mission intensified that he would be that person once transformed.

When Yeshua was dead, 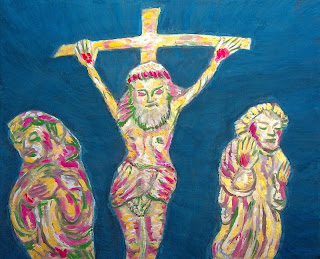 with days passing (and no incoming messiah), such ambiguity among followers was gone. Yeshua either has to be the messiah, or he is no one. The disciples had gone, but to what?

They'd have gone home to Galilee and surely, resume their living, that is the fishing on long nights and plenty of time to talk and reflect. They would still expect the end, as so many Jews did, and they would carry on with proper Jewish rituals. They might even deliberately want to organise themselves - the family as chief organisers - to maintain the teachings of Yeshua and his place within the situation of expectation. They would recall the most essential teachings, teachings now absorbed as another layer into the Hebrew scripture readings with the rituals and as a presence in the meals. Those Jews dancing and talking about the coming end would be told about a messiah figure who healed and would now be with God and thus able to return. 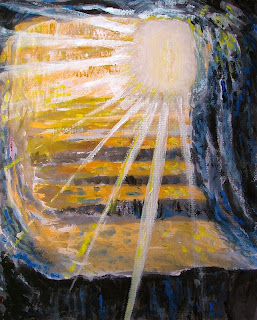 This particular bereavement is shaped by a clear charismatic presence of the person when alive which would not simply have gone away, but adds into the impact of reshaping - especially when expectation of the end is still pregnant. These were people who believed in the supernatural, in angels, demons, and the rest - and surely one reflection is that a person who could remove demons from others need not have died. Such considerations and realisations are conversational, but some strike as eurekas and are involuntary. Some months on, perhaps into harvest next time, or a whole liturgical cycle later, when the readings and rituals give off messages, and the pausing and waiting turns to ritual events and impact. This mixture places Yeshua in the meal rituals, in which will be alongside great prophets. If there were visions and dreams, they will have been given realist and supernatural interpretations. Even presence in the meals carries force. The language of the time would have been used, much the body language of the Jews (whereas Western culture has built up spirit language).

A rather internally troubled and talent-wasted Saul keeps telling synagogue leaders that you can't have some Jews keeping the law and some worshipping messiahs and they ought to discipline them. Some Jews will have argued with him, and plugged into his own end time beliefs. Yeshua is present in the celebrations and we know he will return in full, they say. At some point Saul gets hit by the realisation, that in the end time (in which he believes) the messiah is busy and will come to institute the end. With all his ego, anguish, and self-loathing, and his sense of wasted talent, he gets a vision, and he uses those he debated with to make contact with the leaders. He will now organise the movement! The matter of presence becomes important, as Paul lists that they all received the sense of presence (with himself included at the end). Even a congregation did. Paul still says the messiah and Law are incompatible, and he says that means those Gentiles who go to synagogues seeking a monotheism but of salvation like their gods can also attach to this coming end. And they can become full members without having to become Jews and eat funny and snip their end bit.

Paul it is who joins the apocalyptic, the primal man and dying and rising myths into one salvation religion - focussing for him on Yeshua the second Adam, who will return very soon, and in him one should actually believe (while for the Jews the apocalyptic is more important: Yeshua would be the important vehicle, but not the object of worship - consistent with Yeshua himself). Peter is perhaps persuaded by Paul, to become more effective, and the Gentiles are more convertible to this salvation-monotheism than the Jews to Yeshua the messiah.

So small communities form, and soon the stories are running around and being told - stories about Yeshua giving his presence to the leaders of the movement, the stories that are still forming and cohering in the various localities and movements, some being written down. Then came 70 CE and the first catastrophe for all Jewish messianic movements.

The Christian movements seem to be traders and travelling households, who are people of reputation, and the religion adds to their reputation. As such the religion starts to spread quickly geographically, arriving at synagogue sites but also creating their own worship places.

The stories now are about Yeshua, the movement, the drama of Easter itself, and explain, over that time, that Yeshua was the first of the resurrected, that women were first witnesses and so the tomb was not believed, and so there is now no known tomb to visit (and no tomb worship) and the body was lost into its transformation, and that Yeshua actually stopped visiting as resurrected (so no one is seeing him now) because he ascended. The Church then has its own origins, as such, in arguments with and separating from the Jews, who get the blame for calling Yeshua blasphemous, and though Yeshua will return it increasingly looks like he will return in his own time called 'the second coming'. There is no second coming in Judaism. The gnostics are also argued against, that they don't take the body seriously enough, and this emphasis on the body forms the basis of proto-orthodoxy that follows the Pauline strand.

So Easter is a text writing process, from a set of beliefs and expectations. It becomes formalised into a story, both history-like and biography-like, but this is early Churches pieces of writing out of the stories and Easter becomes one of the celebrations on the lines that the Jews had their celebrations.