At present I'm living in the world of the imagination. Someone who's called for imagination in the arts and pure science beyond material technological needs is Rowan Williams.

I have been listening to a lecture given at Edinburgh by Rowan Williams, former Archbishop of Canterbury. It's a series of the Gifford Lectures called Making Representations: Religious Faith and the Habits of Language and I listened to 'Lecture 1: Representing Reality'. I could follow it because I've engaged with this material before, and particularly by non-realists. There was contained within, and rather too easily accepted, I thought, the idea that language developed as a result of hearing music. Artwork too was representational, with early man, in the sense that it was highly interpretive of subject matter and not just a form of reportage. So this lecture was, as though, theology, but swept through some anthropological speculations and even left brain right (holistic) brain representations. It even had a good use of Buddhism and paradoxes, the equivalent in Christianity being (as later mentioned) where you don't know that it's one God or three.

I'm not convinced about this - yet another - origin of language speculation. Here's why. A dog has no musical insight at all. You can give it a disco beat, a rhythm, a melody, Mozart, and it is nothing but ignored noise. But if you craft certain sounds and expressions of excitement or censure, and word forms, the dog is on to what you are saying in a very basic manner, but well enough to negotiate the environment in 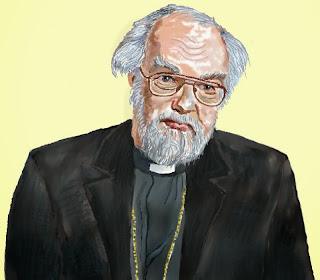 which the human leader of the pack otherwise chatters away. Higher animals, social animals, also have rudiments of symbolic action. My view (no one has ever asked me) is that language is based in symbolic action and human movement. It includes music: music is simply an open-ended, imprecise, symbolic system, and has certain properties of reference and refreshment.

You have to wonder what a bunch of African and Asian archbishops would have made of these analyses and speculations when they bang out literalist versions of their creed. I also wonder how the lecturer can say sensible high-end things and yet have acted the ecclesiastical authoritarian and even arm-twister during his time in office. What is the point of these speculative approaches to knowing, when they have no impact on what one does when dealing with institutions and people?

I'm currently trying to write a novel. The exercise is itself interesting, rather than seeing it as a mercenary activity. It probably relates to no obvious market of readers. It is a Church setting and in some lost corner of a renamed Lincolnshire. Few in these clergy actually believe Christianity any more, in any recognisable dogma sense. There are differences, but two, main, ordained and getting ordained characters have lost their doctrinal beliefs. One was evangelical, and still gets referred that way, and one was liberal, though the latter has some pneuematic recovery as a result of going through with the ordination to be priest. The local economy is bust too, so the locality gets along by an economy of sex, and in its distorted world the local suffragan bishop runs a secretive swingers network, and far from being progressive he is trying to recruit into it just as spies try and recruit spies - by getting people into position, by being in the right places and involved with active types but maintaining other fronts. Indeed, while the swinging goes on, and these conferences where travelling-in fat cat business people rent prostitutes during conferences, the bishop maintains a front face of standard expected morality. But the place is different, with massage parlours and the like. There's mental illness in it too, a schizophrenic (who's partnered by the bishop - you can't tell if he really cares for her or is just exploiting her), and a depressive who gets into a real sacrificial life by becoming a sex worker or prostitute. Two intelligent archaeologist twins end up being models and masseurs. A chap tries to be a magician, thus there can be a discourse on different types of magic as well as comments on the supernatural and miracles (miracles are not seen as magic tricks but literary and symbolic communal devices). Set against this theology as a form of lying is a company that checks measurements in ships and vehicles, a sort of honesty company that has its own internal department to check it too it is being honest. It is quantitative honesty, whereas the Church is qualitative dishonesty. And even it is soiled by the locality. Economic activity as utility is discussed too (the casino is about addiction, and addiction is not utility) because clearly economic activity in present times is a kind of deception (I could pursue this further). The measurement firm pulls out of the town and retreats to Harwich, its headquarters.

The novel has plot twists because the group that exposes the bishop to the media in the end agonises about taking him in to their independent liberal Catholic operation that itself becomes a front for all sorts of body activity - and the body means sex as well as the mind. In the end it's a case of meet the new boss - after all, the locality determines what the parameters are for a successful religious operation, and one that needs income. And then come more plot twists. It is like a detective story, so there is a private detective involved, but it's also about memories and friendships and even a family that was alternative and from which the main character finds herself at some distance - they reject her conformity, and she hardly conforms. There's a symbol running through of a discovered Anglo-Saxon cross, that must be Pagan but something isn't right about its discovery).

Having written it through, I'm now using novel writing software to break it up into scenes and chapters and fix characters and locations. It's like a database of characters listed and imported into scenes, and it reduces the contradictions and errors that come when the writing process involves changing ideas and new directions. Corrections derived that are needed further back are never consistently applied so mistakes enter in. I've weeded most out but I started forgetting some of the order of the scenes, and this software helps a great deal. I have new scenes I want to insert and make other additions. If I do more about the economy then it will need some other scenes in it as supporting acts.Could do some politics too, as a means to refer to the economy. Politics, after all, as anyone who voted Liberal Democrat well knows, is all about deception.

Meanwhile I have a serious and worrying external hard drive breakdown to deal with. The novel isn't there but my music files have vanished. Oh dear and it hasn't self-corrected.

Posted by Pluralist (Adrian Worsfold) at 23:32

The novel sounds oh so very brave of you, Adrian.... 'the corrupt priest'. Never heard that one before!!

Maybe braver still would have been to taken on 'the corrupt imam' or 'the corrupt UU minister'? Dangerous in different ways

But that wouldn't fit with your agenda I guess, so...

There's a Unitarian chapel encountered during the pre-ordination retreat. Two of them have a long debate with a lay leader. What happens is the Unitarian views are easily absorbed and dismissed as 'don't work' as a Church - they are both as easily as liberal; there is also a chap who is online with OURS, a made-up online Unitarian resource, but his main outlook is Buddhist-Pagan.