Baroness Ros Altmann was a member of the Labour Party prior to 2007. She has been Conservative from 2015. She likes to think of herself as politically independent regarding social justice, including pensions campaigning and became Minister of State for Pensions 11 May 2015 until 15 July 2016.

She appeared 16 August on Channel 4 News, pointing out that democracy moves along and that if there is no way to come out of the EU without huge damage then we should consider consulting or some other means to stay in. She points out the threats people receive who say anything like this, and hopes there is a space for people like her in the Conservative Party. 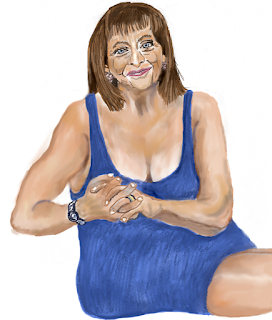 She wants to stay Conservative, but is interested that a centre party suggestion shows people who'd come together to stay in the EU or as close as can.

The latest absurdity is the Irish border. To show how absurd, it wasn't exactly long ago that David Davis was claiming technological solutions with number plate recognition etc. at the Irish border.

How does that work then? The government says, when it comes to immigration, which is what matters, it will work by employers showing that employees can work in the UK.

But that's not what it is about. Look at it the other way around.

Suppose we fall out of the EU and tariffs begin. Britain might say 'oh sod it' and have a open border with Ireland. We vote in each others' elections, after all. But what of the goods from Britain going into Ireland. There will be external tariffs to pay for going into the EU. How is the EU going to collect them, or will it simply have to declare the situation illegal via Ireland...

No one in the news media has looked at it that way around. They assume stuff coming into Britain and Britain saying let them in.

Like the Irish proposal, this is just bonkers. It is more than wishful thinking. What we have is a clueless government. They come up with ideas that are just silly.

There are very simple alternatives.

One is crashing out, and damage to the economy. Presumably the House of Commons and House of Lords will stop it, given the balance of forces in each House.

The second is to stay in the Single Market and the Customs Union. That makes sense, except it means we lose sovereignty as a satellite of the European Union without a say in its decisions, and we contribute to the club. Plus immigration is by European rules.

The third is to stay in. Now Baroness Ros Altmann might see this as the logical way forward, but she needs to be joined by others.

Not just we have to stay in because it's worse to come out, but what sharing sovereignty actually means in a world of multinationals and borderless finance.

As she said, the economy continues on and we have not left yet. However, on this unemployment the lowest since 1975, don't believe it. They are not comparing like with like. We have schemes galore and people heavily underemployed. The Labour market in 1975 was more stable than now and nowhere near as fragmented. Nor were benefits being squeezed and squeezed as now, forcing many into underemployment. People are going into low wages and at the same time there is a skills shortage.

Nevertheless, stability in the economy comes within the European Union. If we crash out the only survival game is as an offshore cheap labour low productivity country, whilst high value headquarters and plant relocate to the European mainland and, er, including Ireland. Where, of course, companies, people, goods and services will be able to travel in and out of Britain at will...

Posted by Pluralist (Adrian Worsfold) at 03:59