How Not to Leave The [Imaginary] Art Club

This is a story that is not true. Here goes. I am a member of The Art Club (as it happens, I am not regarding a similar group, but let's assume I am). It costs sixty pounds a year (seventy euros and falling) and then paying the models is effectively another sixty pounds a year and then there is the cost of materials. For this I get to paint among a number of people, and join in ad-hoc events and get to enter exhibitions and via voting make policy decisions.

However, I've never liked the group, not really, due to my imagined background of apparent self-sufficiency, and after a long membership I have decided to leave. However, The Art Club is a fact on the ground, and it arranges models and venues and has these exhibitions each year.

Still interested in being an artist, one option is to crash out. I would have to find my own models and venues and see if I can get into various ad-hoc exhibitions. I am not allowed to arrange these until I cease to be a member. Now they think I am a decent artist and would like me involved, but realise I do want to leave. After all, I've said so for over a year now. 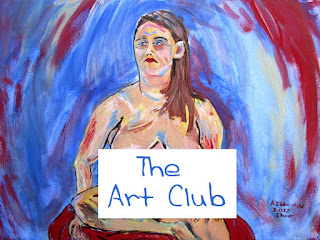 So we have started to negotiate a withdrawal that will hopefully be practical, whilst clearly The Art Club wants to uphold its own future, membership and events, and why one should join it for the benefits of membership.

Meanwhile there is a complication that I have a friend in The Art Club with whom I wish to continue to paint. We joined at the same time. We used to argue a lot, but now we are very friendly, and we must keep this friendship - and yet I am withdrawing and he is not. How can we remain artistic friends, when his art benefits from all that The Art Club does? He is going nowhere because being a member has defined the direction of his art.

Not wishing to crash out, and lose important access to models and venues plus exhibitions, there is an option of associate membership. It costs to have these venues to paint or draw the models, and there are these model contacts, and it costs to join in with arranged exhibitions. But friends who dislike The Art Club say that to join these specifically is pretty much the same as being in the Art Club, and the payment in is just about as much. The Committee still decides what I'll end up doing, and the rules to obey, but I'll no longer vote.

So I ask The Art Club to be "imaginative". Using all the insights and arrangements of The Art Club, I will nevertheless call the same "My Art Club" and ask it to be recognised by The Art Club. Payment might be nothing or perhaps minimal to The Art Club, and yet the benefits seem rather the same. Being the same, but different, I can paint along with my friend.

Understandably, The Art Club says we can't have individual painters picking and choosing like this. You are either in the club or your are not. The Art Club negotiator asks, "Do you want to leave or not? Why do you want to leave and yet things remain the same? We have everything set up here and a Committee to rule on it." Meanwhile one of The Art Club's leading members says my proposals sound: "like someone wanting to join in the near future, not leave."

My proposals are a "fantasy island", they say, because I want to paint their models and use their venues, and yet go out and get my own models and my own venues (unlike The Art Club members). As for exhibitions, I will always join in the exhibition with my painting friend, but not necessarily other exhibitions, although I can, I argue, and yet will add in my own exhibitions - should I find any.

While this flexible in and out is being arranged and set up - my club that is like their club - we will have a transition of flexible withdrawal from their club.

Obviously I am told that this is not on. Anyhow, meantime, I claim that the talks are making progress, The Art Club instead asks for clarity given the known constraints, and I contact the local media to back me up by slurring The Art Club for being "rigid".

Meanwhile I have a different and as yet inactive advisor, who hints that for a transition period I simply stay with The Art Club's venues and models, and indeed its exhibitions. This will be the specific arrangement so I no longer vote for or sit on the Committee. I do this for a transition period - "as long as necessary and as short as possible" - which presumably involves 'crashing out' at some point in the future, being unable to arrange models, venues and exhibitions while having The Art Club arrangements in place.

Increasingly friends ask why, if I want to paint models, have good venues and enter in exhibitions, I don't stay in The Art Club after all.

As the time runs out for talking, The Art Club says it is fed up with such talking when what I want is so indecisive. It won't extend negotiating for negotiating's sake, so either leave and there will be solicitors' letters on costs to pay, or stay, or stay and this time join in fully and properly.

Posted by Pluralist (Adrian Worsfold) at 03:56