The Logic Behind the Chaos

It's clear that the negotiations to leave the European Union have reached a critical point, despite the incompetence that seems to be on display every time they take place.

The 'second division' nature of the government is pretty obvious. There is a lack of plan, and a lack of ability to put what they come up with at any one time into place. And yet a logical shape is presenting itself.

If the policy intention is to have no border in this sense in the island of Ireland, and of course none in this sense within the United Kingdom, then the logic is the softest of Brexits (ugly word) possible.

The alternative is variation: as was expressed from Scotland, Wales and London, all of whom wanted to be in the Single Market and Customs Union, if Northern Ireland was to have continuing regulatory convergence with the Republic. Despite devolution, this seems to be too great a variation, and why should England be at a disadvantage in this respect? 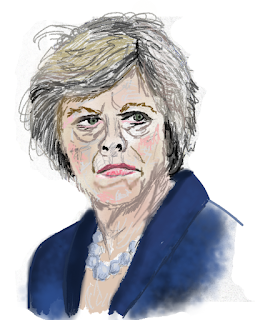 Now I always knew that the "hard Brexit" rhetoric of Theresa May was either out of character or showed that she has no political principles. It may well be a combination, because no one at the time of her rise to office knew anything about what she stood for, other than being a Tory of course. She clearly has a great deal of flexibility.

In more recent times she has upped the love-in rhetoric with the European Union, and become more pragmatic. At times the Cabinet has gone to open warfare, and more recently has applied a little self-discipline. At times one thought Boris Johnson wanted to be sacked, to campaign again, but it is obhvious that the incompetent Foreign Secretary has stayed - for good or ill.

Now the swivel-eyed brigade have made noises about the 50 billion euros price to leave, but not so much if it gets us out. But now the logic is the broader House of Commons position, and it does mean having to bypass these objectors in her own party, plus about ten Labour MPs.

This is the point about the Democratic Unionist Party objection to Northern Ireland being treated separately. It was never just about their ten MPs. Theresa May probably does not need them. It's about those other Conservatives they can call upon at the same time, by which her strength in the House of Commons on this specific issue dives in terms of any majority (which the DUP gives). The swivel eyed are all dedicated Unionists, all of whom want this sharp and conclusive exit from the European Union, and in all parts of this Union of nations.

The Labour Party has not been much clearer, but leading figures have said recently that the party has never ruled out staying in the Single Market and the Customs Union, and if this does firm up as the party policy, then this is where ostensibly Theresa May can find her vote to leave the European Union but stay in the Single Market and Customs Union.

The Northern Irish Unionists won't like it, but their objection of not being treated separately falls away.

However, would Labour give her this vote?

The Liberal Democrats should not, on the simple argument that if we are going to stay in the Single Market and Customs Union, then it is more logical to have a say in their direction, and provide Ministers, Commissioners and Members of the European Parliament. We should "exit from Brexit" as Vince Cable says. Theresa May can say that formally the European Court of Justice would have no superiority over British law, but then we would do whatever it says in these economic spheres, and these spheres are broad and wide. We may as well also provide a judge into this court. As Benny, formerly of Abba, said the other week, "Stay." The Scottish Nationalists may well agree.

Plus Labour will want a General Election, as we all need because the government is consumed with this 'Brexit' and does sod all else of significance as people suffer the continued lack of economic growth and absence of social progress.

The danger is that taking these positions, Theresa May without principles will stay in office and allow us to crash out of the European Union. In one sense the nuclear button works both ways, and in the end we have to ask whether this 'remainer' is wreckless just to remain in office.

And on that basis her own 'remainer' Tories may consider whether enough is enough, and themselves see the issue as more important than simply staying in office in a sterile sense and call it a day. Let's have that General Election.

Now we know the issues better than we did, it could well be that this time the Liberal Democrats get their Europe issue election and say, if you vote for us, we will stay in. And other MPs who would rather stay in should stop being zombies as now and have the courage of their convictions: a General Election trumps a referendum. This is the issue and time to show that staying in is more logical than the soft leaving.

Posted by Pluralist (Adrian Worsfold) at 20:32