Unless Self-Inflicted She Wins

So the MPs put Sunak first but will have to accept the membership's verdict should they, as expected, put Truss first. That is a core source of instability for the future, a lack of authority in the parliamentary system in which the Prime Minister exists on the basis of the approval of the House of Commons.

The Tory system among MPs was always to come at least second. The winner in terms of MPs support had to 'lend' votes to have a satisfactory second place person to then beat using the party membership. Sunak's people thought they had a better chance of beating Truss over Maudant. but now, as they seek future cabinet jobs, even Maudant (and indeed Tugendhat) has now approved of Truss over Sunak. 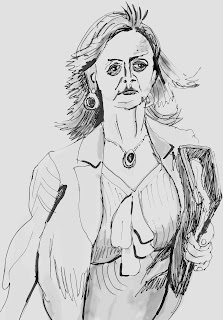 Truss wanted regional pay boards. She says she was misrepresented, in her U turn of the policy. I'm not surprised she can U turn, because she has done it all the way along to such an extent that when in power and with these monarchial powers she can become anything she likes. Her policy is a fantasy of Tory-appealing tax cuts when there is a crying need for public services and dealing with poverty. She may well ignore all that she has said to them, rather as the Labour leader Keir Starmer has been doing to his own  selectorate. He is currently dumping policy commitments as fast as he can.

The tragedy is that Starmer is so uncharismatic and so unable to score into an open goal that she might even win in a General Election. She is the attention seeker, in her disrespect for Nicola Sturgeon and Scottish democracy. Starmer is no attention seeker as he seems to be politically shy. Ed Davey has done his own policy disappearing act, meanwhile, when he could make a unique appeal to have a Single Market and Customs Union with the European Union to solve, rapidly, many of the cost-raising backlogs we face. Unique policy may well not attract everyone, but it will attract with enthusiasm and in a wish to reverse recent political stupidity a numerous block of voters and in key constituencies. We don't need two UK opposition parties where the public are clueless about their policies. Everyone knows what the SNP stands for, both regarding Scotland and the European Union.

Posted by Pluralist (Adrian Worsfold) at 04:45