In trying to achieve a Covenant with disciplining powers, the Anglican Communion Institute (ACI) continues its campaign against The Episcopal Church (TEC) and it apparently being in favour of the first two sections of the St Andrew's Draft but not the last section or the tentative appendix. The ACI authors want to tell the Covenant Design Group arguments of which it is well aware. Repetition does not equal keeping up some form of pressure.

A piece by Philip Turner and Christopher Seitz argues that TEC was over-represented at Lambeth 2008, given 200 or so missing bishops from elsewhere. Well, first of all, those who turn up have a bigger right to be heard and make an input. We don't know what those 200 missing represent; they seem themselves to vary between uninterest in a Covenant and wanting one so strict that it would never pass. One of the problems about not turning up is you don't know what they think.

A Covenant that will pass all the various synods of Churches will have to be acceptable to most if not all of these Churches, and must include those which it targets. If it does not, then it will be useless. It is not just TEC that would reject the punitive elements of a Covenant - even the Church of England might (given its own debating), and there is also the question whether, legally, it can even accept such outside limitation on its own development, as it changes its balance via ordaining women as bishops.

Of course the argument has run that a Covenant without disciplining powers would be useless. It may be, therefore, that the whole approach towards a Covenant is useless. But then we are back to repetition, because it has been said so often. A punitive one won't get through, and one that describes Anglicanism has no point.

The Catholicity of Anglicanism is not affected: it remains as was, and innovation that seeks to be faithful to the core sources of the Church has been a feature of Anglicanism since well before this particular dispute. Congregationalist Churches are part of Catholic Christianity too, so independency is no bar to Catholicity, but Anglicanism has an Episcopacy for each Church that can meet between Churches, as indeed it does once every ten years and far more often informally and through agreements and recognitions.

The ACI argument is stuck in a rut. It goes nowhere except round and around. Indeed the more it says the same thing, the less effective it becomes. 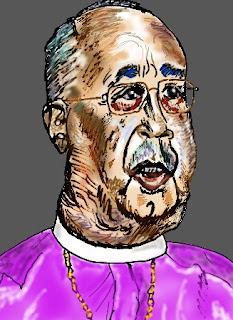 when attending the Festival of Faith at St. Luke’s Episcopal Church in Bladensburg, Maryland, USA, on September 13th, mixing with Forward in Faith representation.

His main point was that it is the Covenant or bust.

He wants the process speeding up. After comments on St Andrew's Draft should be in by March 2009 the third draft of the covenant is to be completed by next April to be ready for submission to the Anglican Consultative Council when it meets in May.

He thinks that after their three rounds of discussions they:

I don't know how they think their own discussions leads to the mind of the Church. What Church? Who agrees with that?

In any case, events seem to be happening quicker than with an even speeded up Covenant. He still wants Churches to sign up to a Covenant that would then define them as having violated it.

Er, yeah: not likely. Nor this illustration:

"Once you belong to the family, you belong. But in many families, you remain in the family but you can’t stay in the house because your presence in the home is a bad example to other young people, and so you are forced to move out because what you are doing is an offence to the integrity of the family."

So telling the daughter, who has followed what she thinks are gospel principles regarding all her friends, that she is going to sign up to house rules in order to be kicked out, is going to lead her, and other family members who agree with her, to sign up?

Posted by Pluralist (Adrian Worsfold) at 02:53