A Different Covenant - and Controversy

An interesting debate in Unitarian Universalism...

The Unitarian Universalist Association Article II has to be renewed every fifteen years, and this underlines the evolving nature of Unitarian Universalism. The UUA Commission on Appraisal started this in 2006. Here is the Draft text so far, and scroll down for what is ruffling the feathers...

The Unitarian Universalist Association is composed of congregations rooted in the heritage of two religious faiths: the Unitarian heritage ever questioning and ever seeking the unity in all things, and the Universalist heritage ever affirming the power of hope and God’s infinite love. Both traditions have been shaped by heretics, choice-makers who in every age have summoned individuals and communities to maintain their beliefs in spite of persecution and to struggle for religious freedom.

The living tradition we share draws from many sources.

Unitarianism and Universalism are grounded on more than two thousand years of Jewish and Christian teachings, traditions, and experiences. Unitarian Universalism is not contained in any single book or creed. It draws from the teachings of the Abrahamic religions, Earth-centered spirituality, and other world religious traditions. It engages perspectives from humanism, mysticism, theism, scepticism, naturalism, and feminist and liberation theologies. It is informed by the arts and the sciences. It trusts the value of direct experiences of mystery and wonder, and it recognizes the sacred may be found within the ordinary.

Wisdom and beauty may be expressed in many forms: in poetry and prose, in story and song, in metaphor and myth, in drama and dance, in fabric and painting, in scripture and music, in drawing and sculpture, in public ritual and solitary practice, in prophetic speech and courageous deed.

In order that we might work together in harmony to make our communities and our world more likely to protect and nurture all that is positive and hopeful; and in order that members of our congregations might find spiritual challenge to become their best selves as they worship and work together to create the Beloved Community, we, the member congregations of the Unitarian Universalist Association, covenant to honour and uphold:

The inherent worth and dignity of every person

At the core of Unitarian Universalism is recognition of the sanctity of every human being across the lifespan. We are relational creatures, capable of both good and evil. We have experienced enough brokenness, including in ourselves, to seek the power of forgiveness and reconciliation. We are called to make choices that help to heal and transform ourselves and the world, and to move toward solidarity with all beings.

Grateful for the gift of life and mindful of our own mortality, we seek to respond with generosity and loving action. We are called to live in right relationship with others.

Acceptance of one another and encouragement of spiritual growth

We seek to enter dialogue with one another in mutual love and respect, honouring our varied backgrounds and paths. We are called to stretch and deepen our faith through religious education, creative engagement, and spiritual practice in our congregations and in our lives.

A free and responsible search for truth and meaning

Unitarian Universalism is an evolutionary religion that encourages and supports lifelong spiritual exploration. Unitarian Universalist religious authority lies in the individual, nurtured and tested in congregation and wider community. In a spirit of humility and openness, we are called to seek truth and meaning, wherever found, through experience, reason, intuition, and emotion.

The right of conscience and the use of democratic processes

We seek to ensure that all voices are heard, especially those often left out on the margins. We are called to promote fairness, accountability, honesty, and transparency.

The goal of world community with peace, liberty, and justice for all

We seek to create, sustain, and celebrate multi-generational and multi-cultural communities where oppression cannot thrive and where hope and peace flourish. We are called to counter legacies of injustice and to foster reconciliation.

Inspired by the beauty and holiness of the Earth, we become more willing to relinquish material desires. We recognize the need for sacrifice as we build a world that is both just and sustainable. We are called to be good stewards, restoring the Earth and protecting all beings.

As free yet interdependent congregations, we enter into this covenant, promising to one another our mutual trust, kindness, and support. Should we break this covenant, we will seek to repair the relationship and recommit to the promises we have made.

We strive to be an association of congregations that welcome persons of every identity while calling them to act in right relationship. We encourage the fullest participation allowed by law, with no person excluded solely on the basis of age or identity.

Structures of power have traditionally created barriers for persons and groups with certain identities, abilities, and histories. Dissatisfied with mere non-discrimination, we commit to structuring congregational and associational life in ways that empower and enhance the efforts and experiences of every participant.

Freedom of belief is central to the Unitarian Universalist heritage. Nothing in these bylaws shall be deemed to infringe upon individual freedom of belief. Although no statement of belief can be required as a creedal test for individual membership in a congregation or congregational affiliation with the Association, congregations are free to establish their own statements of purpose, covenants, and bonds of union.

Some of us in the British Unitarians used to be rather envious of the American script about its principles and purposes,

compared with the unprogressive British equivalent and some of the duplicity it encouraged.

But this one is not problem free; the statement causing all the trouble is this:

There are people arguing against including this text, or fundamentally changing it, and those who think it is right. No one has decided what constitutes misappropriation, say some.

Given that it draws from so many sources, the use of an imported or borrowed ritual

inevitably changes the meaning of that ritual. I used to realise that when in the Hull Unitarian Church use was made of what were called 'Buddhist Beatitudes'. The framework into which they were put was nothing to do with Buddhism, despite the text involved. When I took a service I tried to use imported content with fidelity, but this was not always possible.

Never mind Sydney, I am one of the few laypeople who has presided at a Eucharist. I made changes to broaden it, but tried to make it faithful to where it was coming from. This meant an inherited and contentious Unitarian view of Incarnation

along with a recognition that this was part of the core community ritual of the Christian community that was narrower and collectively upheld what the Unitarians had rejected. So inevitably as this ritual drew on its available and useful multiple meanings, it was different in emphasis from its source. Whether it was a misappropriation of cultural and religious practices I don't know, 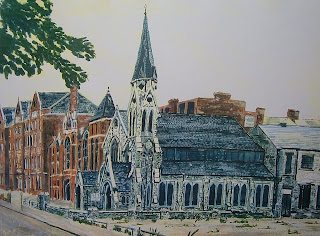 but in the end we are going to apply our own meanings as participants (and I think it has changed in emphasis of meaning even within Christianity - we live in different times under different assumptions), and meanings will be extracted.

For what it is worth, despite its noble intentions, I think that paragraph is best dropped. Not that I am in the UUA or even in the United States, but it seems it would lead people to argue about what can be used and cannot be used, and that would go against the binding function of ritual.

Posted by Pluralist (Adrian Worsfold) at 18:08