From Eastleigh to Potential Economic Disaster

That the Liberal Democrats won will bear them up, though the reality is that they held on with a 14.5% drop in the vote nationally (to 32%, the lowest to win a by-election) and it would result in 42 seats nationally taken straight across. It matters because the -14.5% is consistent with the drop in their poll ratings to the 10% they maintain. My view is that in the north they will still be hammered. The Tories are also regarded as arrogant failures, -14% here (both had 19% swings to UKIP). Cameron spoke with forked tongue in India (more students as immigrants) and indeed today against capping bankers bonuses; and the drop recorded in immigration is a fiddle because it is based on reducing the student intake, easy to do, though meaning a drop in income for universities. UKIP came close to being first, and would have been other than for the postal vote, and though I don't care for what they stand for their candidate was far more coherent than the Liberal Democrat's. He praised Nick Clegg, whereas in what he didn't know and did know recently he demonstrated his ability to lie again.

Cameron is in trouble, but the one thing the Tories could do for power is sign a pre-election pact with UKIP to have an in-out referendum and act upon it for the next election. Without that the Tories won't win, and it is possible Labour will win but not with a majority. They'd be calling on the 42, but surely not Nick Clegg. If they had that, the Tories would split, because many would be in Europe if sceptical. It needs an out of Europe party to have a cast iron referendum. Surely Cameron is in trouble now, and if he is so is the coalition.

The Liberal Democrat gave a pathetic, written, badly presented speech as the winner, but on mentioning fairness someone shouted out, "What about the bedroom tax?" Quite so. This is why the Liberal Democrats are down 14.5%, because they went into the election with a manifesto and then stood on their heads and even loved aspects of their governance with the Tories. They lied, and misled. 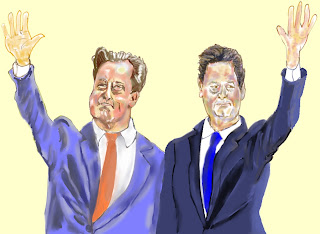 On BBC 1 Question Time the filmaker Ken Loach said something significant. He said UKIP are a renewing party from the right, and what is needed is a renewing party from the left. At one time the Liberal Democrats were that, but they ruined it via the Orange Group being in the leadership and finding such bedfellows with the Tories. They've ruined it. But a win may well prevent a complete meltdown in the future.

The policies aren't working. What people don't realise is the danger we face of hyperinflation. We have a situation now where the loss of the AAA rating could affect bond prices downwards, though the Bank of England by buying government bonds is keeping the prices up/ interest rates down and passing money into the banking system. The money is parked, as the banks have sat on it, but if the economy inflates to get itself moving, the money parked could become a flood all at once and some activity and a small inflation become hyperinflation. We've had suppressed inflation for a long time now - in property, and that bubble burst, in credit and that has been pulled back, and now in the financial instruments at bank level. Austerity doesn't work, because it rams the brakes on and causes less production and less ability to handle sudden movements in money. The Chancellor of the Exchequer is utterly cluesless, a boy from privilege doing a man's job, and Cameron is a PR man also over-promoted. The biggest mistake of the Liberal Democrats is to have ever had anything to do with these people; the so-called stability of government should have been measured from the beginning and not the road ahead.

For in the short term the bedroom tax and other benefit losses will massively deflate the economy; there are people either underemployed or doing workfare yet counted as employed (the figures are just fiddled - like with immigration), and there are now coming huge job losses from local authorities. This could combine with money moving that leads to an inflationary burst, and the shit we could be in soon just doesn't bear thinking about.

In 1990 communism collapsed and the fact is that in 2010 capitalism largely collapsed. It collapsed because it all went east and the west consumed on the credit. But we now have monetary policies that feed the banks, governments effectively going bust instead, and the money policies could result in chaos.

What we need soon is a combination of State power with economic direction, with spending and State provision, strengthening of individual rights and financial redistribution, and declarations that debt is ended (rather in the Jubilee sense) with creditors having to take it on the chin. Yes, they might be reluctant to lend again, but they will and at real rates of interest. There's a lot of starting again necessary.

Posted by Pluralist (Adrian Worsfold) at 04:42