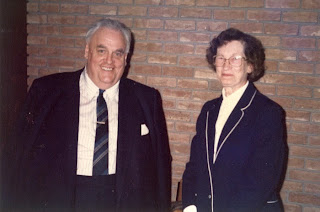 Above is a picture of my late mother and the late Cyril Smith MP (from 1972). It was taken on June 22 1986 when the said man took a service and mingled with the people. About two years later he was knighted. Whilst the Unitarian publication The Inquirer for 14th September 2013 asked what would Unitarians do if a Jimmy Savile walked through the door, the Dispatches programme for Channel 4 broadcast on 12 September had reporter Liz MacKean presenting her investigation of Smith's paedophilia and that although police officers locally wanted to prosecute, Security Services, politicians and the Crown Prosecution Service (the latter in 1970) allowed Smith to continue to abuse for decades. In other words, such a person wasn't just coming through the door but was opening churches and taking services. Unlike Jimmy Savile there were pages and pages on Smith. He didn't just whack the bare behinds of boys sent to him, but went into institutional homes of boys (Cambridge House and Knowl View School) and "the fat man" had a liking for the "young and tight" and other delicacies as well as delivering punishment - some of it quite violent.

I have written to The Inquirer that it's not what is done about absusers straying into Unitarian churches (or any other for that matter) but that here was one who actually opened churches and preached in them and spouted an old fashioned Unitarian Christianity. His election broadcast in 1974 emphasised Christian-like values and honesty in public life. 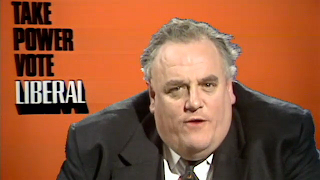 And material (from the police!) was published locally in the Rochdale Alternative Paper, The New Statesman and in Private Eye (e.g. 1979), without Cyril Smith suing them.

The point is, of course, we were taken in; but I remember at some point asking Cyril Smith and being told he believed in One God, No Devil and twenty shillings in the pound. This isn't in my account of his service at the time, but my account shows how he could dupe everyone.
Posted by Pluralist (Adrian Worsfold) at 23:24