I have been given "permission" to apparently 'take apart' a piece about the Virgin Mary in the August edition of the Parish News of St. Mary's Church, Barton-upon-Humber. It is written by David Redrobe, former Methodist minister, now Anglican layperson but still considers he has the ordained 'mark', and who also is the husband of curate Kathy Colwell. I don't know if permission is the same as invitation, but as I rarely write anything on this subject I can add a few comments. In order to do so here, I have to reproduce the article, and some may want to read this in their own right without my comments afterwards.

Of course, at this point myth, symbol, imagination, anticipation and hope come into play. We run out of words because the mysteries of God ultimately are beyond words and something else has to take their place otherwise what is the point of it all?

Two Old Testament "dreams" fascinate me. Elijah and Enoch transcend death and are taken into the presence of God. These dreams seem to have influenced the imagination of early Christians as they sought to come to terms with the Mother of Jesus after her "death'. We cannot exclude her from our Worship, our Thanksgiving and Intercession, because of who she was and the integral part that she played in the birth of the fundamental Christian belief that Jesus was the "human face of God", the Incarnation. So much of Christian Tradition and Spirituality throughout the world keeps Mary apart from death and corruption. She needs no more discipline and preparation beyond "death". Because of who she was and is she is in the presence of God.

The image of the bodily Assumption of the Blessed Virgin Mary gives ultimate dignity to the whole person. It redeems the body from the other ways in which the "flesh" has been regarded by the Church over many centuries. And, as in other contexts, the mind of the Church, including its moral theology, needs refreshing, and the Assumption refreshes it methinks! May I direct you to 2 Corinthians chapter 5: verse 4 to help you think about the Assumption. 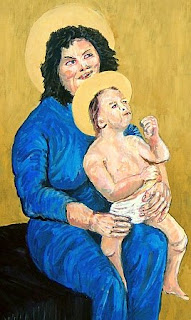 It does not have to be taken literally. We accept this with other aspects of our shared Christian Faith. But it does encourage us to think about and pray for the transformation of everything within the grace and love of God.

It is the place and purpose of the Virgin Mary who has greatly influenced me to accept and believe in the Ordained Ministry of women. Over the years, like many men I have wrestled with this. However we would not have had Jesus without Mary. Every priest's Ministry is so close to hers, and without her, the fellowship of Ordained Ministry that we share, is incomplete. And if we are happy to see the Virgin Mary holding up the Word made flesh portrayed on Christmas card and icon how can we refuse women the right to hold the Eucharistic Bread in fulfilment of their call to Priesthood?

Taking the last point first, I happen to think that, on its own terms, it is a very good point. If you believe that Mary held God the Son as a baby and ministered to him as a mother and Jew, brought him up, had an adult relationship, and was there at the place of his death, then it does seem rather strange to deny ministry to women in terms of handling and ministering to the bread and wine if considered to be the body and blood of Christ. (I'll return to this point.)

So, they say, whilst Jesus was resurrected and afterwards ascended, three characters in the Bible were assumed: Elijah, Enoch and Mary. God took Enoch (Genesis) and Elijah went up in a whirlwind (2 Kings). The assumption of Mary is extra-biblical, and so it goes that she didn't die in the usual sense but was taken off to heaven. One story is she was met by the disciples and the virgins of the Mount of Olives and indeed Christ popped down on a visit to tell her of her fate, and her soul was whisked off to heaven while the body went to Gethsemane in a coffin. Thomas seeing the body and angels rising up was characteristically doubtful, so the disciples took him to the burial place and the body was not found. The disciples got to see her complete at the right hand of her Son in heaven.

Now many would say this is a load of tosh, but it is no more or less a load of tosh than virgin births and resurrections in a land of supernatural beliefs. It is the same story telling, but some people privilege the stories in the Bible over other Church stories.

I'm afraid I don't go for any of this. We assume (!) that Mary must have done a good job as a mother, but we don't know that. Some mothers do good loving jobs with their sons and the son ends up somewhat incapable of handling the world, like me, whereas other mothers are distant and remote and the son becomes streetwise and capable. There is nothing to go on, other than some biblical bits that suggest a good relationship and others suggest strain and distance. We don't even know why Jesus ended up as the especially religious one in the family, though it (under his mother) clearly took up his post-death eschatological ministry and all the expectations of that kind of last days Judaism.

It just seems to me that the Assumption adds yet another impossibility to the figure of devotion of this virgin-mother - an impossibility. It comes to some men to raise to devotion a female impossibility, and it suits patriarchy. If we want a female principle in the Godhead, then it should be done directly, perhaps like the Pagans do. Indeed transcendence should have feminine qualities, if there are identifiable qualities to such a concept. Then it really makes sense to have women as priests, and women as sexual as men are sexual too.

I have more time for Mary Magdalene, in the sense of an independent lass who knocks about with the boys, perhaps with some money in her pockets for the cause (though they were from capable self-earners), and gives Jesus some close friendship, assuming he didn't marry her or had a fancy towards one of the disciples.

In fact I don't really want to criticise David's piece, because it means so little to me and obviously so much to him, except at the end (again) where he says:

how can we refuse women the right to hold the Eucharistic Bread in fulfilment of their call to Priesthood?

Who is this "we"? Is it the patriarchy that accepts or refuses women into the priesthood? Is it this one-sided ecumenical thing again, that is so in fashion, which refuses gay relationship people the right to "represent" the Church? So, in this case, a few of the 'we' give the representative function to women (while many of 'they' do not).

Recently I took it that my preference for symbolism in worship put me just on the Anglo-Catholic side of the line in terms of my participation in worship. This caused a recent visitor to the town to laugh somewhat, in the sense of asking me to that side of the line of what? Quite. And I am in process of readjustment as I don't now take the bread and wine and also sit out of creed-saying. Actually I could say much less, but I participate still in a reflective sense. I sometimes think that this is my last Anglican church, and of course the drift of the Anglican denomination in many aspects and under present leadership is disgusting.

I was going to preach the day after the Assumption date, but not to Anglicans (new later date). That raised a laugh too, but shouldn't as I won't mention it in my talking.

Now I shall be offensive to some, with an old joke.

There is this chap from Bromley-by-Bow (London) who gets on with two women in his life, and both are clearly showing an interest in him: at work during the day with Sarah and in the pub in the evenings with Maria, and he wants to know whether to make a life with one or the other. Anyway he passes one of these awful billboards from the Churches, one about Fresh Expressions, but this non-churchgoer wouldn't know a fresh expression from a stale one. But, being a bit superstitious, he thought he might go in a church and get some sort of divine message, and turned into the next one along that happened to be Roman Catholic (perhaps a stale expression). So he sat in a pew and looked at all the clutter in such a church and then closed his eyes to do what is technically known by the professionals as 'petitioning God'. "Dear God," he thought, "Shall I make my life with my wonderful, knowledgeable, interesting colleague, Sarah, or should it be that fun of the evening and bright spirit, who can down a few, Maria? Perhaps you will give me a sign. Amen." And he then opened his eyes to get up and leave the building, and as he turned to go his eyes drifted up to the coloured window and he read 'Ave Maria'. So so he did, and they did, each the other, about three days later.
Posted by Pluralist (Adrian Worsfold) at 18:15

The last first. I liked the joke, and I was not offended.

As to the Assumption of Mary, it's not important to me. It doesn't matter whether she suffered death and corruption, or not. And if Mary was not the best mother ever, so be it. Her boy turned out all right.

What's important about Mary to me is that she said, "Yes", when asked to take on a role that must have seemed daunting, indeed. She trusted God to make things right.

See, I go for a difference between myth and actuality. In actuality, she had sex and had a child. She received no communication beyond the normal whispering in your ear from your bloke. But later on as the myth got going, we had a special birth and angels and all sorts turning up, and the poor bloke with his sweet nothings shoved to one side, except for the apparent connection up the family tree to some important patriarch or two, and that without the benefit of TV programmes like 'Who Do You Think You Are?'.

I'm afraid it is hopeless!! Most people simply cannot see the difference between "fact" and "truth". I have written on this extensively; the difference was clearly laid down by Aristotle. The story of Oedipus is true, but not fact. And, of course, truth is greater than fact.

Better not sign this. I'm not very popular with the RC/Anglican crowd.

Pluralist, we could go on and on about our differences in what we believe and how we believe, but I believe there is truth in the myths. After all, they are lovely stories. And I know that will drive you mad.

Allowing for a definition of myth, that it contains truth that is returning rather than historical, it is also the case that myth allows returning harm that is not historical. I think such has to be tackled, as well as those who bang on as if there is history in it.

Grandmere, that's the whole point!!There may be truth in the "myths" but they are not"facts."

Pluralist, phone rang so I don't know if you got my comment. So "myths" MAY be true, but they are not facts. That's the whole point, grandmere.

I wish people didn't insist on confusing magical with mystical.

Who's "people" and when did this occur?