The days of the polymath are over. Francis William Newman, the Unitarian brother of John Henry, was a polymath, at a time when this was just about possible. He was a historian, an economist, a theologian, a mathematician, a philosopher, a dietician (and leading vegetarian) and these at credible, academic levels. 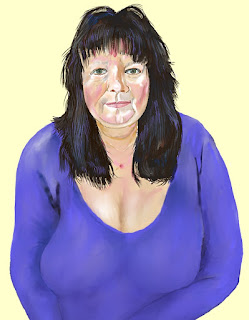 Now it is not possible. I like to think that I can give a run for someone's money on a number of subject areas. I'm not bad with theology, a bit less with theology, can do descriptive and diagramatic economics, high level sociology, a little social anthropology, improved a lot on historiography, and quite good on politics as theory and structures. I can also draw and paint. Here's something that the person involved likes (see right):

But I know how my brain is wired up, and it is towards the abstracting and literary-logical. The weakness is in mathematics. I am sufficiently numeric, but rather lost with mental arithmetic, but this absence hampers me. So I cannot do physics at anything beyond a basic understanding of contemporary issues, and economics done via maths leaves me puzzled (though why humans would ever behave mathematically is its own puzzle - the stupidity of economics) and even human and some other branches of Geography that should be descriptive and debating ends up in a mess of numbers proving goodness knows what.

And this is why, facing something like NoteTab clips - a sort of macro for doing things with text in text processing, I am easily overtaken. I can see logically what steps I want to do that gets me from A to B, and I can employ a simple keyboard and related language to do these tasks. The problem, I am told, is that keyboards are sticky and slow, and delays have to be added to avoid the clips failing. (This I know to my cost - a ^!Keyboard SHIFTDOWN instruction in a clip that failed left the computer in a permanent SHIFT down position and unrecoverable for navigation and selection except by rebooting). I can also understand the ^!Menu commands, and some variants, and they are faster. Every week I use clips to take a burning CD data file and turn it into a running order, but most of that is manual intervention after initial clip treatment. Where my brain fails is in the logical thinking that is epitomised in RegEx, a sort of conditional language that directs and limits what certain instructions do. I also need to learn how to embed one instruction into another, and the Help files that do show how are not always best written for people who think like me. I can spend a lot of time with the clipbook writing Help file and get angry as I jump from one place to another and wish better examples were offered - some also being offered more usefully in clips themselves.

So it is that I had a go, and then others had a much better go, at extracting lyrics and titles from music files. One then not only produced a few RegEx lines that extracted lyrics in the correct order but also made a good estimate each time at producing a verse structure. How the hell that was done, when the lyrics follow the music in a continuous line, I do not know, and for all the staring at the equation (is it an equation?) I cannot tell what is doing what.

The problem is this. Any music composed file has several outputs. One is synthesised music, based on the notes and timing, and that can also be exported as an audio file (for its kind of editing) and thus sing along to it from an audio CD. The composed file can also be exported to a sheet music file as a .PDF. It shows the music and lyrics underneath - it is like a print out but to a file, as with any .PDF. But another output is to a generic .XML file (and compressed variants) that is indeed XML - looks like HTML. As I understand it, HTML has now become a subset of XML despite being earlier. So this means tags and data within them, tags that mean something to all music composers with XML input, and thus interpretation and positioning of the data. I understand that many a word processor and spreadsheet has 'gone over' to XML.

Now take a Music made .PDF file and you can extract out the music. Some software will do this: mine is free for one page of sheet music only (ofen well enough). But if you extract out the lyrics, they come by first syllable each verse, second syllable each verse and so on, until you have a jumble of syllables all of which need reordering. I'm sure a clip can take the number of verses and reorder the syllables to produce the words. But it seemed to me easier to use the coding in the .XML file to identify the lyrics and guide the order of output, and produce the items in order. Furthermore with the main title on the top line, it was possible even for me to get that to become the filename for saving the result.

The experts in the clip help group simply took over the task, and I must use the best code made, but it isn't mine. Here it is, nevertheless, and obviously the good clip writer makes a clip as short as possible. I still see the need to add an OK or Cancel box because of the need to have an .XML file to work on before the clip is executed. Here, then, is beyond the limit of my ability to think, and a good exercise in knowing my limits. However, I know that I should be able to have a more comprehensive link for my burn list to become a playlist and I shall be working on that alone for my satisfaction, also knowing that someone else could produce it in minutes. After all, there is the brilliance of software writers themselves.

By the way, I cannot read music.

Posted by Pluralist (Adrian Worsfold) at 20:37