Having resigned from doing a church magazine, I decided that I wanted to continue with something similar iin skill use for my own Pluralist Website. I could of course just make articles as webpages and add them in. And nothing wrong with that. Except of course they get lost into the generality of all of them. I can highlight new ones here, but that is only for those who visit here. So something up front is a little different, another emphasis, with a front page button access, as well as an extended definition of the 'Stories' Area, as renamed.

The idea then is to mix material along the subjects already as part of the website. In the previous magazine I did (that now continues with the church administrator under the same editor), there were a few intentional rules, given its main presentation was as printed out. One was to put main pieces facing the front, that is on odd page numbers, and lesser to the back. However, two page pieces were to be facing. Three then, the assumed maximum length, could be any three. All were to be continuous - nothing like in The Inquirer with its numerous 'continued on...' 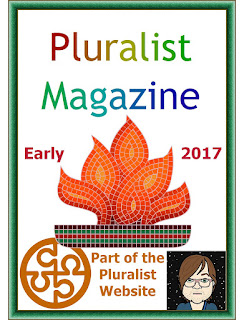 Front and back were distinct: I preferred  an informative front and the back could be poster like: best was a colouring in, I thought. We settled on Trebruchet MS 12pt as most readable - I'd started on Arial 10 Bold, which didn't allow further emphasis. It meant for the A5 format very short articles. I wanted variety. I found myself not only editing pieces (prior to editorial decisions) but crushing some, losing some important detail at times. I didn't intentionally ever do bleed-through and what was therefore required ahead of printing (extra margin to assist cutting), so there was always a white border. Nevertheless a variety of software created a variety of appearance, as .PDF pages were made and combined into one document.

Now, with my magazine, and for online, some format decisions can be relaxed. The cover is similar (same in frame) to my previous magazine work, but the back is less critical. The front now contains the Pluralist logo and a flame that relates to Sir Cato Worsfold's Vestal Virgins, whilst in a kind of also mosaic chalice. I have abandoned an article size limit, but kept the Trebruchet MS 12pt font in an A5 size page. Also, articles can start where they will even though I still offer an alternative book order for A4 printing, in the online linking. I'm less worried about coloured backgrounds too, used with criticism before, although I keep them faded. They form a function of saying this colour means this article continuing. Some new presentation rules though include the consistent Google-like titles, often after an opening paragraph that starts with a drop capital, vertically two lines being enough (I like the Freehand591 BT for these enlarged opening characters).

So the first magazine - maybe quarterly but possibly more - is available.

It shows the long-gone Sutton-on-Hull railway station. Article 1 is about the end of Setam on Hessle Road in Hull, having contributed myself to very many Facebook Old Hull section comments (I did not start this) and making corrections to opinions expressed. Setam was part-managed by my long-standing friend. It is an essay an article on changes in retailing. Its Pluralist Website home would be in Localities or Learning/ Business and Organisations. The next article might be seen as some hoary old chestnut: 'Can Unitarians Be Christians?' In fact the question extends to who at all can be called Christian. It reflects my reading of Bart Ehrman (again) and a really good little book about Christianity in the Arab world, which serves to describe early Christianity broadly (with a little too much acceptance of orthodoxy as an early norm). So my piece covers how one does the historical Jesus and more on early Christianity, because in my view with varieties of belief and our cultural distance the decision to be Christian is about relating oneself and one's group in continuation from the early believers. Politics is next, with religion, on how the Liberal Party was involved in Trade Unionism before Labour got going. Fred Maddison went to school in Hull and failed to represent a Hull constituency in the city. This already has a shorter webpage in Learning - Religion - Unitarianism (local). Then a long article again on defining preaching in a pluralist and liberal setting, using an Anglican approach for comparison and contrast. This would be in Learning - Religion, probably under Unitarianism (national and international). Finally is the Nash Equilibrium, a puzzle with answers, with relevance to road space in Hull, that probably would supply a webpage in Learning- Maths. I was saving this for some time.

So there is the main pages order version, and then the back-facing (with front cover) and front-facing A4 print run versions.

Posted by Pluralist (Adrian Worsfold) at 20:53