Internationally, locally and personally, 2016 has been an awful year. We've seen the portrayal of evil in Syria and related spilling out over the world. We have had cynical, nasty, if some places restrained, political leaders engaging in conflict. The xenophobic right wing has been doing its usual trick of hoodwinking the masses and making headway. The problem is that 2017 could be a whole lot worse.

The United States is about to lose a cautious, thinking, President for someone whose logic on many matters doesn't extend further than chat down the pub and is someone who jumps to assumptions at best. The newcomer isn't divested of his interests and we suspect his palliness with the Russians is because of longer term business interests, where corruption is rife and politics is twisted.

In this country we have a Prime Minister and Ministers who show themselves to be out of their depths - and their depths are shallow. They seem intent on pursuing an exit from the European Union despite all the damage it will do, and the narrowness of vision this involves. I am clear that a referendum set up for party political reasons and made as a gamble that went wrong should not be driving policy for a representative system of control over government. For decades political culture has pressed down on the tendency to tribalism, nationalism and racism, and now the can of worms has been opened.

The city in which I live has its year of culture. Best of luck with that. I regard it as ephemeral. Culture follows on from economic and social structures and forms, and isn't 'made up' - or at least shouldn't be. So I pay it little interest. For those who think otherwise, enjoy, and let's see if the various authorities cease from cocking things up as they have all the road works prior to and running into this particular year.

I've been on what is now in Orwellian speak called a 'Fitness Certificate' renewed several times. It will go through the State processes of being rendered ineffectual so a cycle goes on. Last year saw me declared diabetic, although in the last count I went below 48 (the key number: 42-47 is a warning). Over Christmas I might have gone over 48 again. I've never had so many salads and oily fish. 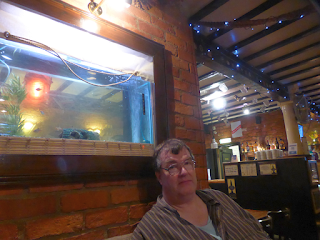 Next year will simply be a task of 'hanging on' and trying to keep afloat. That is the only goal. My religious involvement is being minimalised and I'll make it more personal and less collective. My friendships are precious (and one is having a serious life change: loss of a lifetime's work habit) and my potential relationships are unlikely to non-existent.


All around me though is where it could go all go seriously wrong. The scenario is an idiot President of the USA surrounded by his chosen business people. Pallying up to Putin, Putin nevertheless tests him on some matter of conflict. Being narcissistic, the stupid USA President reacts and everything spirals out of control. He is already making conflict with China, on the basis that he isn't into their business scenario and blames them for bad competition. The Chinese, we hope, are more rational, but they are building those islands in the sea. The British could add to the damage of the European Union, and its ideology of sharing and being peaceful, liberal and democratic is thrown into serious doubt. Already our Prime Minister has, over Israel's dangerous expansion into Palestinian land, sucked up to the President elect rather than the one with some brains. If this is the pattern to come, it shows the weakness of Britain coming outside of the European Union. In the end the political, social and economic environment shapes what happens personally.
Perhaps if we begin pessimistically then we won't be surprised, and things may actually turn out to be better. Things just look very gloomy, that's all.

Posted by Pluralist (Adrian Worsfold) at 01:50