What the Supreme Court has done is made a government intending to use a supposed Prerogative power have to use a Statute power instead. Constitutionally this is fascinating because it underlines now that every supposed Prerogative power comes under the scrutiny of the Supreme Court. Prerogative power was the assumption of residual Monachism -Royal Supremacy - and that the Ministers are indeed Ministers of the Crown. But it turns out now that the Crown is subject to the Surpreme Court: it and only it can confirm what is and what is not a Prerogative Power. Parliament can still decide what it likes, and the Surpreme Court cannot undermine the High Court of Parliament (of which Law Lords were once a part, within and part of it and functoning under the House of Lords), but there is no basis for any Monarch to have its non-interference in the making of powers. Its powers remain so long as Parliament permits, and indeed Parliament can remove Prerogative powers. One such was the power of the Prime Minister to call a General Election, acting in the place of the Monarch. But then Parliament can overturn the Fixed Term Parliament Act any time it likes.

The Supreme Court also upheld the supremacy of the UK over all devolved institutions, defining a difference between law and convention (when so much of the constitution is bedrocked on convention). The devolved institutions are simply not bedded in enough to acquire veto power -  a veto power because it has passed laws and granted rights that will be affected by removing from the European Union. It means that devolution is not woven into the UK, but is potentially here today and gone tomorrow on the whim of the highest level of UK law formation.

So, here we are then: an Act of Parliament is needed to grant the Government power to invoke Article 50. No resistance can come from devolved nations.

Some of us think that a Referendum given was advisory. It was clearly very significant, very legitimate, very advisory, but it was utterly flawed and of a moment. Having a referendum does not give its victors the right to bully everyone else into submission. Everyone has the right to make the argument against and the right to strategise to bring about a change of opinion either through representatives or by another advisory referendum to assist the representatives.

Some of us think that the argument to leave the EU is disastrous. It takes away the simplicity of trading. It takes away the theory of economic sharing leads to political sharing -  a means to peace. This means overlapping political formed economic institutions. It means a confederacy, where governments meet and make the critical decisions, often with veto blockings, but where there is a union-wide Parliament as well, one that should gain powers over time. The EU executive initiates Europe-wide legislation for the Ministers, and the executive also monitors legislation - and calls in the courts to enforce. The EU was the level to take on the multinationals, to deal with environment, to handle trade, to watch the power of power blocs. And yet actual governments made the decisions, working together, and had subsidiarity, for moving everything down that could be moved down.

But this was never presented to British voters: instead it was a diet via the popular press and more of bureaucrats and straight bananas, elites and lost democracy, a massive massive bureaucracy. Britain continued to wallow in its historical myths and the workers were as tribal as the daftest of old elites.

So we have to make the argument that the Integrated or Single Market is only a substitute on its own for having decision-making that constitutes its rules.

Here is why. If we in the UK negotiate a trade deal with the external EU, as we must, then the deal must be policed. It will be policed by us, and by the EU through its institutions. These will still have to rule. This is not even the full Single Market membership (as an outsider) but it is STILL subject to intergovernmental and EU rule-making. It will still cost money. It will still involve doing things we do not want. The membership of the Single Market simply means using the EU institutions as arbiters of equal treatment. It will still cost money. There will be, however, no policy input.

What we need is political leadership that starts with an intention to block giving the government Statute power to invoke Article 50. The argument, like the above paragraph, still needs to be made, in speeches and in papers. It also needs the argument from vision, from idealism, and against tribalism.

The Liberal Democrats are playing a game of requiring a referendum on the deal as a means by which, on not receiving such a promise, they can vote against Article 50. There is an argument for this, but I oppose referenda anyway because they undermine representative democracy. Referenda bring in substitute reasons for voting based on (or not) flawed campaigns and promises. But the Liberal Democrats are stuck between the rock of 'respecting' a referendum and opposing leaving the EU. The Scottish Nationalists (and indeed Irish Republicans and Nationalists) have an easier reason to vote against: their countries/ regions voted against. 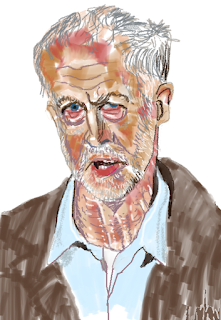 shows all the leadership abilities of a wet sponge dry in patches. He wants the single market and all that, plus workers' rights, but will support invoking Article 50 anyway. So what if he doesn't get these negotiating positions from the government? Well, he'll support the government anyway.

Result is that the government can concoct any deal it likes; the vote at the end will be for 'Deal or No Deal' and if 'No Deal' results then it's straight over the exit cliff edge. Only the EU other governments can unanimously prevent us going over the cliff edge by keeping us in... Well done Jeremy Corbyn and your three line whip - your one contribution to British political history.

Time for some gathering of political leadership to the contrary of that nonsense. We need politics as information building and changing minds. Stop Article 50 now and make the argument as others try and bring it back in for invoking. Indeed it is likely that Jeremy Corbyn will be the one person who makes sure Article 50 does go through directly. Who'd have thought it?

Posted by Pluralist (Adrian Worsfold) at 20:14