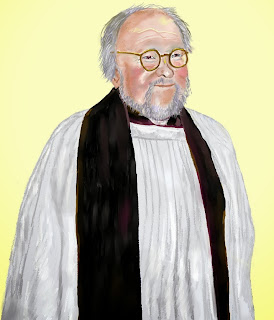 Andrew Linzey (referred to in the previous post) edited, along with Richard Kirker, Gays and the Future of Anglicanism (O Books, 2005), which basically said that the Church of England is institutionally and systemically homophobic.

The Church Times this week has a remarkably swift and to the point editorial in which it, now, basically, says the same thing. So an academic book that was on the edge of the institution has, in a sense, come in a bit, while the institution remains in contradiction with itself.

It seems I might have over reported Pilling, The Report of the House of Bishops Working Group on Human Sexuality, that it advocated blessings with certain understandings done by priests but without formal liturgies to actually state that the blessing was for 'stability' and 'friend-faithfulness' between a civil partnership (never mind nmarried) couple. I was stating that a blessing, with or without a liturgy, was official and representative when carried out by an ordained person as in place of a bishop and therefore of the same authority; the Church is ducking and diving by trying to do this without a liturgy, as if in some dark corner but then could be during a standard service. The priest, otherwise committed to only using formally-approved Anglican liturgies, would invent a little of his or her own for the blessing. It's sort of duplicity institutionalised.

Ah, but I could be wrong. It may not be a blessing but rather 'marks' the partnership of the gay couple. I'm not sure what the difference is, because 'marking' is also different from the position now, where some private prayers can be said by some priest or minister with the gay couple (who must be ever so grateful for the condescending ritual of privacy on offer).

It could be so worded: "The marking of God the Father, God the Son and God the Holy Spirit." What's that then?

I wonder if a 'mark' is rather like a baptism? Oh, that has a blessing.

Pilling is spilling all over the place. It's spilt. There won't be two years of talk. It's dead in the water already (awkward mixed metaphors). Nothing will happen. When they finally ordain women as bishops (supposing they do) there will be such an institutional sigh of exhaustion that they won't want to tackle anything so controversial for a long time. The institution can't stand the further shock. There'll have to be anarchy. This one the liberals cannot win, not for ages. They may press the case, and rightly so, but they won't themselves see any change other than the diversity of anarchy set against formal denial. Live the duplicity.
Posted by Pluralist (Adrian Worsfold) at 07:22

Maybe "the liberals cannot win," but, on the grounds argued in David Runcorn's appendix to Pilling, an increasingly number of evangelicals now affirm LGBT relationships. A member of Fulcrum's leadership team has just resigned over the issue. Female ordination came from an alliance of evangelical, liberal, and catholic Anglicans. Such an alliance is now forming around affirming loving relationships regardless of gender.

Whether the Church of England wants to ignore it or not, society won't let it. Its current teaching is toxic to mission, devoid of reason, and unsustainable. The status quo is a greater shock to the institution than change.

This can be won, and won soon. Justice will out, especially when it's in lockstep with realpolitik.

I hope you're right.