We Are All Cartoons, It Turns Out

Forget about the nativity, or Christianity, or indeed much that is mythologically otherwise regarding cosmic origins and interventions. Indeed, much of what is scientific is only a working model of evidence at our convenient level of operation. It turns out that we are, in fact, fundamentally, cartoons, and we have no gravity. We don't fall off the page. I'm using my intelligence, here, to interpret Nature, the international weekly journal of science.

Blame the Japanese scientists, who have perhaps spent too long looking at drawings of people with big eyes. Or blame Gerald Scarfe. Blame holographs for being misnamed as holograms (it's just ignorance, this).

Apparently you have to go into the areas of thinking where General Relativity - he's fought a few battles - mix it with Quantum mechanics (I've met such engineers with their slide rules and steam traction engines) where you get string theory and some eleven dimensions which are ten plus time. If this is hard to understand, imagine a cat and a ball of string and give it enough time.

But all this is only so far. The reason is due to calculating what happens at black holes. These are mysterious areas where, really, probes should be inserted, but so far they have been only observed and calculated. And in doing the calculating, these Japanese mathematical modelists can now understand black holes in a much simpler model that is but two dimensional. It's as if, when you do the common denominator, we are really editions of the hard to fathom Family Guy where the dog Brian has sensible conversations and the baby is already a fully developed psychopath.

Now as a layperson I used to think that a black hole was like this. Everything could sink into it, and nothing could get out. In it time stopped, although from within it continued as if out there had sped into high speed and, presumably, all time flashed by. The 'reality' from within, therefore, was resolved by the birth of another time and another space - therefore another universe. I'm no mathematician, but even I could see a sort of bounce-renewal theory of universes, where the debris of one universe forms the start of another. The energy out is likely to be explosive. It still allows for a borrowing theory by which nothing takes a loan, and pays back, or on a loan, explodes into activity, is slightly off smooth, forms into lumps, and leaves us with lots of galaxies and others lumps, and a mortgage to pay off. It is quite a cheap mortgage and so the lunch does seem to be something of a gift. OK, I chucked in twenty quid at the Indian restaurant this week, despite our folks having been insulted by the complaints of a nearby table, but I probably ate more. That sort of thing. The complainant was definitely two dimensional.

Remember that, in our universe, where the artist needs red to account for it flying apart, even black holes will eventually die out as all energy vibrates uselessly in massive distances from each other. Such is entropy, a sort of solitary confinement of cold final existences.

Yet, instead, rather than the loan allowing all sorts of new loans in new times and spaces, via black plug-holes, the notion now is that the material that vanishes ends up on a vast canvas like a giant Rolf Harris self-portrait asking, long ago, "Can you guess what it is yet?" 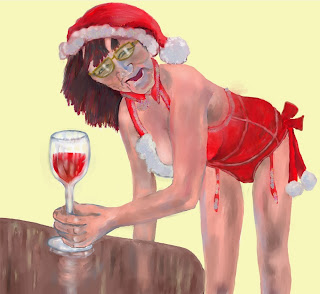 As the drawing becomes revealed, the black hole vanishes, and we all get the picture, but it is on a gravity free (drawings don't fall down) canvas of two dimensions. Personally, I would argue that the black hole still recreates because everything continues holographically even if it is fundamentally two dimensions: it only appears to be three or eleven. It's like Santa coming through the sky - she exists in two dimensions only but still leave a drink. Even time is stuck, like a selection of two dimensional slides, so don't leave her up the chimney.

Except that these Japanese have not reproduced the required number of dimensions. The two dimensions only holograph into an eight dimensional sphere with two additional dimensions. So this may be so much hooey. At least it beats the Bhagavad Gita, Quran or the Bible and the nonsense you read in them; this is much more artistic and interesting and evidence/ mathematically based.

Trouble is, other than with a cat and a canvas, I don't know what you can do with this perspective. Imagine, I suppose; and I say Happy Yuletide to visitors who read this ever more occasional and pathetically hollow blog with reinterpreted rubbish like this. Well, I get bored about religion: little happens in Unitarianism and the Anglican Church has become an ethical seriously bad joke. They have been my institutional interests. We are at a black hole time for religion, where what has been swallowed up by today's secular black hole is going to come out sometime and somewhere in a new recreation. What has been, for so long, seems to be in its intellectual death-throes. Unlike when it comes to cosmology.

Posted by Pluralist (Adrian Worsfold) at 18:01