Pessimistic at this General Election

It's election day. Yes, it is time to punish the Liberal Democrats for wasting my vote last time. I have waited and waited, and now I can do it. If Cameron is the largest party, they are just as likely to shit all over us again, with the difference this time that we know they will do it.

Nevertheless, in the most boring and condom-covered campaign ever, one can see that, probably, the Liberal Democrats and Clegg have done enough to probably stave off the worst. He did become irrelevant quickly, but in amongst the protected did expose himself a little bit to take some flak.

Cameron's gamble to withdraw from debate exposed him as a chicken, and a manufactured chicken, but it did deprive the public of negative results against Miliband. Miliband thus had the better campaign to begin with, and was seen at least to have a coherent purpose about his campaigning. But then along came smoothy boy, the PR man, who can string sentences together, and even appear with the same two sweaty hairs pointing downwards from his make-up guru to show just how busy he was getting. His sleeves were rolled up, his tie off, no matter whether it was warm or wet or windy outside. He appeared in factories and hanger buildings, in the latter surrounded by a handful of people that might give the impression of many more. Faced with actual questions from an actual if parties-following public (in Leeds), he put on a monologue show of prepared lines that didn't answer the questions, and his supporters clapped. At the same time, Miliband slowed them up by wanting to know everyone's name, and started to stumble when he tried to answer some questions. Clegg just stood there and took it. Surprisingly enough, Farage stayed in his constituency and also took it, and actually looked more approached and fresher for it. It was the counterfactual thing to do, and though he looked gaffe-ridden he started to look approachable. And I say that despising much of what he stands for.

The real issue has been Scotland, because of the post Independence referendum effect. Instead of treating Scotland as a nation, as a contributor, as distinctive, Cameron treated them as 'other', because here was a stick by which to beat Miliband. Miliband, instead of being generous, and could have been while being pro-Labour, ran scared, and also allowed the 'branch office' to dictate terms. Rejecting the SNP's overtures  was an internal matter as well.

The Tories ought to be running away with it. If they were run by John Major with this statistical economic recovery, they would probably be romping away. It isn't Miliband that drags a party down, it is Cameron and the cronies who embody the Tory party as a party of privilege, who will dish out the cuts to welfare whilst the rich party on.

This is in an economy that is loaded with private and public debt and a bloated property market again with all that quantitative easing money bubbling out into non-productive financings - if you can't 'grow' that sort of economy, and on low wages, you really are pathetic in leadership. The reality of our economy is not the repeated bullshit of statistics, but the absence of productivity growth - real growth. It is a low wage economy, and low wages always mean more employment against less capital investment. Manufacturing is not recovered, there was no re-balancing of the economy. Labour has failed to counter the statistical news management: it's not just that people don't feel an economic recovery, there is no sustainable economic recovery. 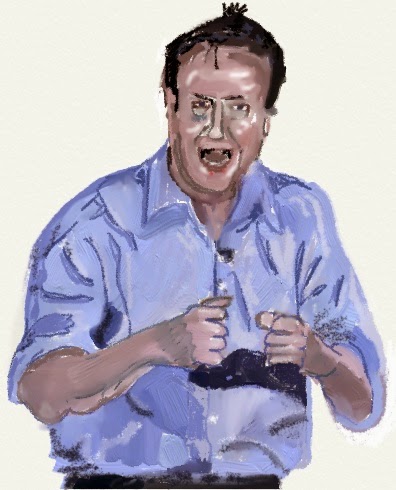 The puzzle is this. How come Cameron, who started off with all sorts of 'compassionate Conservatism' and might have made a true marriage with Liberal Democrats of the Orange Book, turn the Liberal Democrats into a wooden leg to prop up the most vicious Tory led government in decades? It is because he is a PR man through and through, a performer, who learns his lines and puts on an act. All he believes in is the privilege of being, for him, his mates, those he knows. One minute he'll be a redistributor, next minute a right winger. It matters not, because it never bothers him. One minute he is pro-European Union, next minute he'll risk all with a referendum. He'll dodge, he'll weave, and he'll keep with his mate Osborne. He doesn't even want to go on and on.

I'd not be surprised if there's a coup in the Tory party soon after the election, if he fronts a minority party that can't govern, even with a Liberal Democrat prop. If he fails to uphold a Queen's Speech, assuming he tries to make one, his right wing nut jobs will organise to kick him out. They've been running him for long enough. Actually, if Miliband is disappointed he might be soon gone too. Clegg might not even win his seat, and a fresh person at the top would do the Liberal Democrats no harm.

For what it is worth, I am pessimistic. I think, in the end, the act Cameron puts on convinces just enough people. Against him is a very late recovery by personality Farage and a late doggedness by Clegg and Liberal Democrats in the trenches. I just don't think that Miliband made sufficient case attacking the reality of the economy and arguing for the alternative. It wasn't as much the 'gravestone gaffe' as the fact that his campaign ran out of steam, and this is assuming the Greens have faded. The polls haven't moved but there are changes caused by tiny fluctuations of undecided voters in very few constituencies, and they are likely to buy Cameron's line and appearance - especially pensioners who will be exempt from the welfare attacks to come. Perhaps on such low numbers the Greens and Farage's mob do matter.

More than this, the Tories and UKIP voters keep quiet because they are embarrassed to declare their vote.

I'm voting in a safe Labour seat. Anyhow, one outcome of this election, and indeed the prospect of future elections too, is that the First Past the Post voting system is bust. It doesn't work when there is a political stalemate among many parties anyway, and the outcome depends on all sorts of oddities and peculiarities. You may was well have a minimum percentage and then proportionality. Alliance building that once used to take place within two main parties can take place in the open, like it will, but with a result that reflects votes.

That or, not only leaders being changed, but parties could splinter and divide and regroup: Orange Liberal Democrats off to the Tories, progressive Liberal Democrats with much Labour, Greens reaching out to more communal socialists, and Nationalists discovering their own rights and lefts. When the voting system fails, something has to change to repair the body politic.

But things look grim, especially if Cameron gets back in and does better than we expect. There just isn't sufficient head of steam behind Labour to make the difference. I hope I am wrong, and I'll be staying up late into Friday morning to find out.

Posted by Pluralist (Adrian Worsfold) at 03:46

I quite agree. The press are a strong influence for the Tories. I see the consequences at my golf club, ordinary blokes being Daily Mail believers. PR is best but it will be fought to the death. Sadly now both Labour and Liberal compete to be more Tory than each other.

Well you know now. To my mind the most likely reason why the exit polls were so much more accurate than all the previous polls must be something that happened on Thursday. It's pretty obvious what that was. All the right wing press threw everything they had against Miliband.
So if I was PM, I'd want a better voting system but most of all I'd reform the press and the education system, so that voters knew what they were voting about