Get Back on Track!

The election campaign has been a game of two halves.

In the first half, Labour launched a positive, initiative-containing, campaign with the leader at its head, showing Ed Miliband as thoughtful and with a direction. The Tories were lacklustre and it seemed its leader wasn't quite bothered whether he was in the race or not, plus their policies were all economics. Cameron was skittled by Paxman and was seen as running away from debates. Clegg was nowhere, the Greens made minimal impact and Farage made some clownish points.

In the second half, Cameron started acting, playing to his strength as a Public Relations man. Despite the colder weather, he appeared with his shirt sleeves rolled up. This appeals to the ignorant, stupid, and gullible, but then he needs their votes. Cameron also refused to answer good questions but could put on a determined monologue. At the same time, Miliband ran out of more central initiatives, started to stumble over real questions he attempted to answer and then came up with a ridiculous gimmick of a gravestone in which to bury policies (any simple advisor worth a zero-hours contract minimum wage could have seen the other side of whatever that was supposed to portray). Clegg just stood further and took the flak, and looked like he always has, and Farage was starting to look irrelevant along with, at the other end, the Greens.

But the big issue in the otherwise tedious campaign has been Scotland. In the first half Cameron mismanaged Scotland and showed that he was a threat to the union, because he was reactive-English and could snap the UK in two by his inept selectivity. Unfortunately, Miliband has also got it wrong. 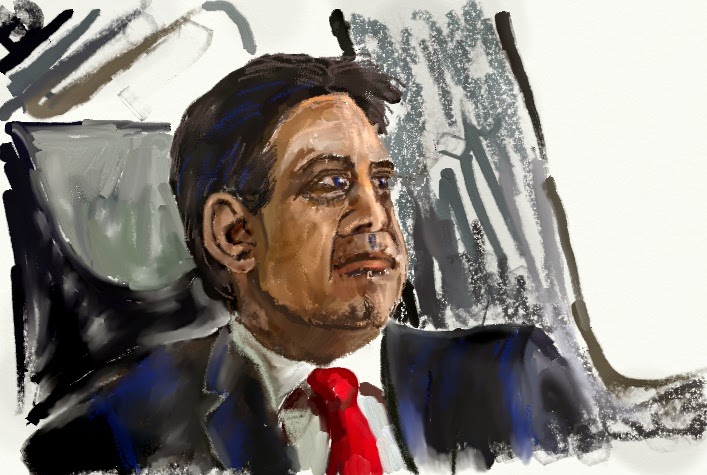 One understands why. He's got Scottish Labour on his back, or in his body, saying it's them (SNP) versus us. He's got the notion that, if he can sell 'Vote SNP and get a Tory government', because Labour needs most seats, he says, then this shores up the Labour outcome. He can play the high moralist ground that the SNP, in wanting to 'break up Britain', cannot be in any coalition or even deal with Labour. He plays the point that there is no negotiating a manifesto, like the Liberal Democrats did. He also plays the strong on defence card regarding the useless Trident. He also defends against simplistic Tory attacks, as they already can dismiss the SNP.

But this is wrong. The Labour in Scotland problem started with Labour in Scotland, in the self-declaration that it was being treated like a branch office, in the behaviour of alliance with other unionist and more despised political parties. It went rotten, up further north, and a clever leader would have realised the weakness of that campaign and put a deputy into Scotland to deal with it more or less alone. He would then realise that the SNP is of the collective left, and been more positive at least to say, something like, "I'm sure the SNP will want to support a Labour administration where the policies are so similar, and there will be no need for any particular deals." He would then create plenty of wriggle room whilst showing no need for the SNP to be in coalition. He could make it clear still that it would be a Labour manifesto driving matters.

Instead there are shadow cabinet members talking wriggle room, when he is not, and this looks disorganised. It's as if he is frightened of the Tory attack. Well, sod them and make your own ground. If the SNP wants to be positive towards the UK, one can welcome such an approach even if tentatively - it's a difference of tone. One further welcomes the historical place and part Scotland has put into the UK and before the UK. Treat it with respect: treat the political culture as important.

This mismanagement of the issue has allowed the Tories space to return to talking economics and looking competent as managing economics. The emphasis on people, including people needing benefits, has been lost.

Because the other side of this election campaign has been the victimology underlying its narrative. The Tories have been caught on the £12 million welfare cuts they won't declare. They are nasty bastards. But Labour also refer to "hard working people" and the same cliches. The people left out, then, the pariahs, with the one exception of removing the obviously horrible Bedroom Tax, is the poorest. Only the Greens have stood up for them. The Tories are ready to viciously attack the poorest. But Labour, scared of being seen as all about benefits, have dodged around the accusation by using the same Tory cliches about people who, "Do the right thing." Doing the right thing includes all pensioners, simply because they vote more, and vote Tory more. Self interest is everything. Labour has said nothing on benefit sanctions, whereas surprisingly the Liberal Democrats think they have been too harsh (another case of them doing one thing and saying another).

Scared of that, Labour keeps quiet. It's focused instead on the quality of economic recovery, as received by "working people" and excluding again. It is a tricky area to try and win an argument. It also goes for the NHS as a drumbeat, just as the Liberal Democrats try it with education (to no impact because no one believes them after tuition fees).

Labour are probably on better ground regarding the European Union referendum: as with the Liberal Democrats, a vote by the people on in or out is dependent on more powers centralised by a treaty. The Tory offer of a referendum after a fake 'renegotiation' can be portrayed as wreckless. It could have been better portrayed, as UKIP have tried, as a con - a renegotiation that would be pronounced as some great success with no need, therefore, for a vote or, if a vote, a recommendation to stay in. People don't regard Cameron as honest on this, and it is why Labour can make its opposition to a vote stick, plus it allows Labour to sound economically responsible (and a good way to do so - worth repeating).

So Labour, as well as having a weak campaign second half, with stupid gimmicks and failures of presentation, has failed regarding Scotland and made less use of Europe from an economic competence point of view. What worries me is that Labour will use more gimmicks and employ more celebrities. It matters instead to make central arguments and treat the electorate as intelligent. Be positive on Scotland as it is, and make a government under the Fixed Term Parliament Act more likely to work.

The danger of a campaign going wrong, while the Tories can do a simplistic 'sunny uplands' song, is fewer seats for Labour as a result. It needs as many as it can get, especially given the reality of Scotland. Otherwise the radical edge can drift of to the Greens, just as UKIP continues to go backwards thanks to its inept campaigning and Tory referendum offer made louder. We need a change and Labour haven't got to get this wrong. And they are getting it wrong at present.

Posted by Pluralist (Adrian Worsfold) at 06:57