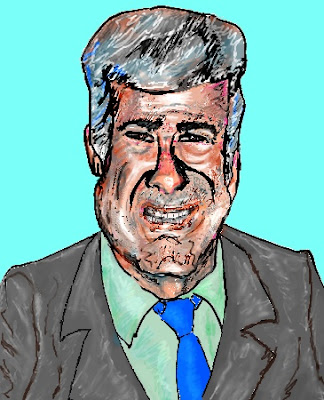 This is by way of a follow-up to later matters in the last entry.

It seems that Chris Sugden, having been visiting Jamaica, has been feeding the Jamaican Gleaner with his viewpoint, and the word "feeding" is used by me only because of how journalists, being generally lazy, reprint the contents of press releases or take whatever is offered (the dictum being the more you provide,the more likely they are to accept your contribution); of course, on pet subjects they offer their own ever continuing bias, so let's allow for that as well. I know nothing of the Jamaican Gleaner, so it is a case of following the text of the report. The report in full is here, from 1 September 2007:

It's another case of a referring to the best bits.

Archbishop Peter Akinola, being the leader of the largest Anglican diocese is seen by many in the church as a natural replacement for the Archbishop of Canterbury, the Most Rev. Rowan Williams.

Well this is quite a development. Who came up with that one, that Akinola is a "natural replacement" for Rowan Williams? Is this Chris Sugden's view?

Sugden is suggesting that the Episcopal church missed an opportunity to take a middle path, and is trying to label it as extreme: after a simple assertion that the Episcopal Church did not fulfil the wishes of the Windsor Report in June 2006 there is then Sugden's own explanation of the dynamic of that meeting:

According to Sugden, "Bishop Peter Lee of Diocese of Virginia an effort to create a kind of middle ground that would satisfy the pro-homosexual lobby and the orthodox Anglicans." "First, people were saying that there are 15 per cent of the Anglicans who are the activists for gay inclusion. Second, there are 15 per cent who are biblically convinced that while people with gay orientation are welcomed like anybody else, there can be no gay practice. And third, there were 70 per cent in the middle who are saying that there is a plague on both your houses - we want to get on being Christians and will that 70 per cent please stand and be counted."

These figures are purely imagined, but let's see what is the argument:

"Bishop Peter Lee was arguing that the average person in the pew just wanted to get on, so let's have something that accepts the Windsor Report with certain caveats. But there was a very strong opposition to that. Peter Lee's argument was we can do nothing and we should do nothing that gives any signal to our active gay and lesbian members that they are anything else but fully members of this church and fully open to all the senior positions in the church - priests, bishops. Therefore, any agreement you come to with the rest of the Anglican communion, should not be at price these people who we fully accept with all their gay practices as being perfectly acceptable members of the Anglican community." But, Bishop Lee's argument, Canon Sugden said, was crushed because that sort of middle of the way view - was acceptable to neither the gay lobby nor the conservative lobby. So the idea of a solid middle ground collapsed.

In fact, that proposal, of Peter Lee, to keep faith with active gay and lesbian members, would have satisfied those very people. It is unclear how this relates to the supposed 70%, if it does. The account just seems odd. What happened is then returned to, despite the biased comment earlier in the report (The 2.3-million member Episcopal Church in the United States, which is led by Bishop Katharine Jefferts Schori, convened the general convention in June of 2006 but did not fulfil the wishes of the Windsor Report.)

So the report goes on, in thus contradictory style:

Following the general convention of the Episcopal church in the United States, the Archbishop of Canterbury created a panel to consider the way forward. The panel drew from the Primates Committee and the Anglican Consultative Council. This group met in September 2006 but they kept their report secretive until a meeting with all primates in Tanzania last February. The report delivered at the Tanzania meeting by the Archbishop of Canterbury was that the Episcopal Church in America had, as their polity allowed, substantially met the recommendations of the Windsor Report.

This does not exactly equate with a simple statement that the Windsor Report sub-group (the 'panel') found that The Episcopal Church had passed on two recommendations and was neutral about the third. There is then this reference to particularly Archbishop Drexel Gomez:

Canon Sugden reported that Archbishop Gomez rejected the Canterbury clerics position, arguing that panel's report was unacceptable and was not an accurate or fair representation of the positions of the Episcopal Church in the United States. The primates gave the Episcopal Church seven months to clarify their reaction to the Windsor Report. That seven month expires on September 30.

Now they are not exactly waiting for September 30, due to these continuing consecrations of Americans under the Kenyans and Ugandans, that follow on from the Nigerians and the Rwandans. This inability to wait is being made clear:

Canon Sugden said it seems the mood of the primates is that gay issues have rocked the Anglican Church long enough and it was time to forge ahead. He cited the response of Archbishop Akinola in a recent speech to the House of Bishops, who said that the matter has dragged on long enough and there can be no semantic appeasing of the various factions in the church. Hence, Akinola stressed, the time had come for the church to choose.

Later on the report states, again with a loaded view:

Though public gay scandals have been rocking the church since 2003, there has hardly been even a feeble mumble out of the Archbishop of Canterbury in defence of the orthodox position in the United States, which is the view of Bishop Duncan of the Episcopal Diocese of Pittsburgh.
"In other words, since the Archbishop of Canterbury has not provided for the safe oversight of the orthodox in the United States, he has forfeited his role as the one who gathers the Communion. This has become further obvious with the refusal of the invitation to the Lambeth Conference by the leaders of over half the Anglicans in the world and the questioning by some English bishops as to whether they will attend".

The text of the report then begins to look close to that posted on the Anglican Mainstream website in Chris Sugden's own writing (use of such phraseology as dumbed-down Lambeth Conference which will not address this issue decisively), as discussed in the previous entry here. It throws in at the end, as well as a mention of the September 30 deadline (one wonders how that is relevant given the stance of the boundary crossers like these particular African Churches) the fact that the Episcopal diocese of Chicago on Tuesday included a lesbian priest among five nominees for bishop. 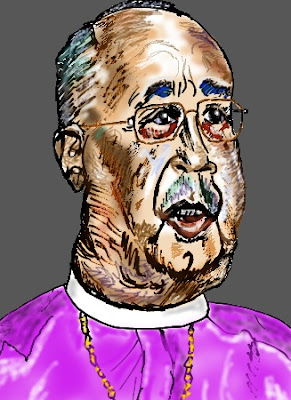 Drexel Gomez was present at the consecrations on September 1, and yet he chairs the Covenant Design Group that is supposed to created a process that guides change in the Anglican Communion to the slowest according to resistance to change from some of its Churches. So it seems he is at once guiding the Anglican Communion towards some sort of solution, including The Episcopal Church (which it isn't, because it won't work) whilst at the same time involving himself with those who are undermining The Episcopal Church and the present condition of the Anglican Communion. It seems that he is batting in both teams, rather like Bishops Duncan and Iker. Chris Sugden is also batting in both teams; he is one of those by his own words who clearly wants Rowan Williams replaced as Archbishop and wants the Communion to have a different basis of operation - in practice will mean an alternative and competing communion. There will be no rush to join Akinola's Communion, even if he is seen as a "natural replacement" by some people, presumably including Chris Sugden.
Posted by Pluralist (Adrian Worsfold) at 21:30