One of the key features of postmodernism is that there is no objective truth, truth that can be fixed in this world. Structuralists said there was (because what is, is not what it is not) and so there is a binary nature to truth. When poststructuralists pointed out that binary opposites contain something of their opposite, then the whole truth thing went into a meltdown, and someone like Baudrillard took the meltdown into liquid and gas form. The virtual became the real, and the real virtual, and there was neither objectivity nor subjectivity: just meaning of signs where the emphasis was on the signifier and the unreliability of anything the signifier actually signified.

What this allows is the creation of spaces for all sorts of fantasy creations. Of course the fantasy is real, just as the real is fantasy. You can live inside such fantasy reality. The problem is that they do not fix very well, are very leaky and bubbles are just,well, bubbles - they can collapse and get very wet.

Yale postliberalism in theology (articulated by George Lindbeck) tries to fix an ecumenical definition of Christianity, and because it cannot be fixed as a Truth, it is expressed as a drama. Hans Frei did the same before this with how the Bible is to be understood - it is "history-like" rather than history and gains its identity through expression by being read (it actually has to be read by a community to have its particular expression - in this sense Lindbeck on the ecumenical doctrine comes before Frei on the Bible). John Milbank went further than Linbeck, creating a premodern content of some sort of Catholic Christianity (but not Roman as such) inside the postmodern bubble. It is a way of peace. He further thinks that, inside this space, this perspective can rule all other perspectives, and opposes vigorously sociology by calling it secular theology. It also opposes the Enlightenment.

Now there are these so called "communion conservatives" in Anglicanism wanting to preserve a single, collective, and orthodox Church - orthodox meaning keeping the whole package interrelating without these pesky nuisance liberals importing their Enlightenment (modernist) heresies. So they do it via this Lindbeck/ Milbank type stuff, especially Milbank as he is an Anglican. 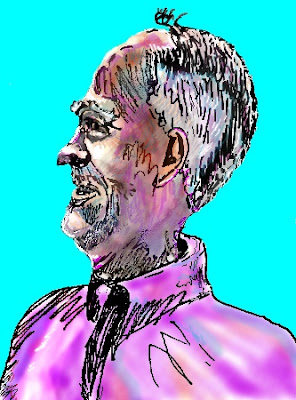 One of these is Craig Uffman (right), who therefore promotes conservatism in theology and makes frequent references to John Milbank. He writes an essay on Fulcrum consistent with its communion conservatism as promoted by Graham Kings.

I think its second part, calling the Enlightenment as heresy, is the sort of twaddle that can be expected from the whole package people. It's as if they want to be in the Middle Ages - but none of these people think like they did in the Middle Ages. The whole point about postmodernity is that it is post modern. It is not chuck away the modern, it follows on from it. There is the work of empirical primary sources history, of philosophy, of social science research on human groups and causality, and on semiotics that also related to social anthropology, and there is the scientific falsifiability method and indeed working hypotheses of understandings along the lines of paradigms. There has been the logic of maths. All these matter. These now become, in postmodernity, intensely deconstructed. What are these primary sources and what do they represent to readers? Is every culture to be understood only from within? What does it mean to have language express changing scientific paradigms (plus the impact of common sense defying quantum variation)? What is the impact of maths that is no longer a sufficient, closed and adequate system to itself and cannot handle extremities?

Postmodernity is not some dive into a romanticised past. Of course it takes on board romanticism, and the fantasies of the poetic. It is about eclectic mixing, as in architecture. Daniel Liechty wrote a postliberal book, Theology in Postliberal Perspective, 1990, SCM, but it is overshadowed by the Yale book, The Nature of Doctrine: Religion and Theology in a Postliberal Age, of 1984 (Liechty's book was started earlier, he told me). This is indeed post-liberal, it understands that there was a liberal phase that it is post about. The book understands different faiths and is driven by ethics. Quite so.

Liberals are all to some extent postliberal, as I say in my paper that might be read out in the local church In Depth Group (see the previous post here). This is because there has to be a package of some sort. But it is no excuse for ignoring other methodologies in other subjects, or calling an important phase in intellectual development a "heresy". This is junk.

It is now a romanticised, rather pathetic hope that somehow an institution can stay loyal to a complete inherited package (from when, precisely - culture changes all the time) and that can be maintained so that it keeps an American Church away from its ethical mission and can keep the Africans on board. The ethical price is just too high. Institutional unity for the sake of unity is just not worth the price of lack of inclusion, when what it seems to be about is some really premodern text that has nothing to do with loving relationships between people who fancy someone else of the same sex.

And this is the point: it is a lot of theological verbage when the ethical question is really quite simple, set against a book that tells us nothing about science, nothing about philosophy, that is not history, that does not employ critical methods - a book which is mythological, that does have ethical insight from Jesus and his expectation of the moment wrapped up within that culture, that is about early Churches written from a Paul dominated path that came to be proto-orthodox and involves an awful lot of arguing in an early charismatic and fluid period. Christians might find great inspiration in the Bible, but are not its slaves.
Posted by Pluralist (Adrian Worsfold) at 23:12

Thank you, Adrian. It is a great honor to get a free cartoon sketch of myself. Can you tweak one thing, though, by adding a bit more hair on top? That actually is where I most romanticize... Thanks also for your comments on Milbank and my presentation of some of his thought. I need to digest them in order to see what you see. If anything, my critique of the Enlightenment is a critique of myself, because, just as I have long been able to appreciate the gifts of the enlightenment, I am now able to see many of its fallacies. And to your point about post-MODERN, what do you think about the phrase "liquid modernity" rather than "post modernity" as a way of getting at your point that we are really just in a different stage of modernity?

The problem with my cartoons is when they "slip away" from looking anything like the original. Even John Spong was difficult to draw - and he is full of lines and distinctive features. Good job Rowan Williams has his beard.

You can have liquid modernity, why not - but what about high modernity. Some emphasise continuity and some emphasise discontinuity. If you emphasise modernity then there is even less space for this internal narrative-Church of its own connected textual understandings, its internal symbolic world. Paul Lakeland in his summarising book Postmodernity (1997), Fortress Press, deals with the problem of Milbank, and the term used there is countermodernity - but it is postmodernity dependent!