Merry Christmas to One and All

It's a CANA Christmas present; but it is not all bad!

(And if you don't want to read this, go down to my picture and little verse at the end)

I find it tricky to understand the latest legal situation in the United States, but the upshot seems to be that Virginia Convocation of Anglicans in North America (CANA) congregations in their attempt to retain property are arguing that there are now two branches of the Anglicanism, defined as one that goes through the See of Canterbury and one that upholds the historic faith, doctrine and discipline of Anglicanism, the leader of which is apparently the Church of Nigeria (Anglican Communion) which changed its documentation in 2005 from its identification with Canterbury to its identity according to a narrow biblical based interpretation of Christianity.

I want to get away from whether or not there is a division in The Episcopal Church or not, which they also seem to argue but the wider implications as from these summary headings reproduced at BabyBlue Café from an excerpt of Section IV of the Post-Trial Brief (pages 49-60):

IV. The CANA Congregations Have Independently Satisfied the Requirements of Virginia Code § 57-9 By Establishing The Existence Of A Division In The Worldwide Anglican Communion And The Existence Of Branches Resulting From That Division.

A. The CANA Congregations Have Demonstrated that a “Division” Has Occurred in the Anglican Communion.

B. The CANA Congregations Have Established that the Church of Nigeria Is A “Branch” of the Anglican Communion that Has Divided From the Episcopal Church.

C. The CANA Congregations Have Established that the Anglican Communion Is a “Church” or “Religious Society.”

D. The CANA Congregations Were “Attached” to the Anglican Communion

More detail is contained in the post trial briefs (.PDFs) also provided via Baby Blue, regarding CANA Congregations (approximately 1 Mb) and the Diocese of Virginia and The Episcopal Church (approximately 2 Mb)

Mark Harris at Preludium argues that there is not a division into two branches as of yet in the Anglican Communion. Thus if the Virginia Court finds in favour of the above, it would not hold up in a higher court because a division cannot be demonstrated. He then thinks it would take an alternative gathering of bishops to demonstrate such a split, and such a gathering would have its own patriarch. Thus he argues that such an alternative gathering, long considered likely, of bishops who deliberately do not go to Lambeth 2008, is important to actually carry out for demonstrative purposes.

I'm a little baffled by this, because it might be enough simply for the not so long ago renamed Church of Nigeria (Anglican Communion) to claim it is the other branch, by virtue of the fact that there are bishops who obey the Primate of Nigeria as in their recent consecration vows. However, then there could be several divisions, if others do not accept Nigerian superiority. Alternatively, Mark Harris becomes right, that a gathering of bishops could create a new structure of an unbending version of Anglicanism as a focus of some Anglican Churches, with a focus via an existing Church or Primate.

The point is that when two such branches are formed it actually produces two Communions. These are not branches: they are separate. To me a branch suggests a tree. Presumably at present this could be argued along the lines of some local (national) Churches still regarded by Canterbury as in Communion organising interventions by its bishops unrecognised by Canterbury. That means such as the Church of Nigeria (Anglican Communion) is having it both ways (rejecting Canterbury itself as a definition of Anglicanism but relying on Canterbury still recognising it. This is not the argument in Virginia. In the Virginia legal business, being a branch is connected with the notion that the Anglican Communion is a Religious Society or a Church. The arguments assert that this exists. Hold on there - this is being argued about now with the Archbishop's own centralisation proposals!

However, if say the Church of Nigeria (Anglican Communion) does not recognise "going through" Canterbury as necessary, but many go through its own Primate, or an allegiance is given to a patriarch, or indeed a group of primates in some sort of Council without a leader, then there are not two branches but two Communions.

Mark Harris sees a loose collection of Churches connected to Canterbury, and then the autocratic one via its patriarch, and he uses the word Communion to describe each.

He also sees the Canterbury one being a loose fellowship of Churches, and "not branches of a single Church".

So it's that Advent Letter again! The Archbishop of Canterbury now is saying there is but one way to read the Bible, and there is a Church that might be marginalised because local Churches expect other local Churches to read the Bible one way, but the marginalising will be done by the to be centralised and clarified, via the Convent, Instruments of Communion, not by other local Churches, as such defeats the principle of unity. Clearly the Archbishop is leaning over in the others' direction; but he is leaning over to the point of falling over when the Communion of which he is titular head has considerable diversity and theological variation. It doesn't perhaps have the public diversity I would like, but it has considerable variation around its core statements and their interpretations within the basic Reformed Catholicism.

Yet, if on the principle of unity, another Communion rises to be a different Anglicanism, then it will seek to organise everywhere.

It means that the Canterbury Communion will be distinct for its diversity - from fundamentalism to liberalism, from high Catholicism to low bare Protestantism, where Churches vary in their tendencies to innovate and conserve, and groups, bodies and individuals vary within each. Every ten years its bishops shall gather in Kent for prayers, 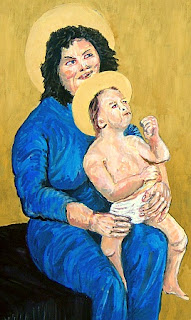 Merry Christmas to one and all, and indeed to our hard-working Archbishop of Canterbury, Rowan Williams, exposed to public comment in the age of the blogger and journalist like never before, and who tries to find a way forward in the most difficult of circumstances possible.

Meanwhile, a little verse for this time, called A Window, and placed amongst liturgy along with my use of There is No Rose for liturgical purposes:

A Window out to the Vastness
Was born in occupied Palestine
Two thousand years ago
In the body of a helpless baby
Who grew up
To tell it like it is
And how it could be
And showed that to get there
It will never be easy
But produces the greatest of all rewards
And told us and showed us this
As a suffering gift
Into glory
In which we can participate
With a little food and a little drink
As a small taste of what is to be.

Posted by Pluralist (Adrian Worsfold) at 03:00