A primate has been discovered patiently planning for the future in order to hurl stones at a congregation.

Recently the Archbishop of Canterbury 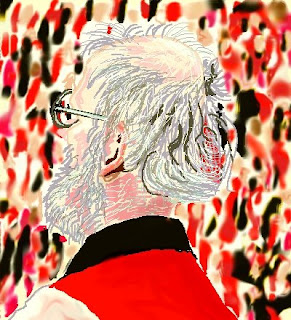 has urged the need for patience in both Church affairs and in the economy (it suggests a proper distribution of risk).

The primate Archbishop Santino of the archdiocese of Furuvik in Sweden has been tracked collecting stones before his own church opened and waiting before people arrived, to hurl the stones at the people once they arrived. He also thumped the concrete church floor to make pieces to throw, which he rounded off first. During the closed season, he never did this, and indeed workman came in to smooth over the floor (health and safety for worshippers).

This showed patience and planning. It is a proof that the primate has an inner mind and can think, which is a quality shared by humans. It means imagining, and this is an essential element in constructing a sermon.

However, the authorities arrested Archbishop Santino and decided to subject him to corrective treatment, known as 'A Clockwork Banana' after advice from Pastoral Visitors Revs. Anthony Burgess and Stanley Kubrik. They cut his balls off and gave him a banana to get over the loss.

However, the Archbishop of Canterbury is no pope and cannot order bishops and archbishops to be castrated, beneficial as this may be.

This article can be taken as proof that I am a lurker of the Sea of Faith email discussion list, as 'A Clockwork Banana' is not my original idea but came from Chris Athorne.
Posted by Pluralist (Adrian Worsfold) at 17:14