Saturday and Sunday just gone involved me in attending a Congregational Assessment. This means two people of the denomination look through certain requested documents, come down and do a survey of the premises and its appearance as regards people attending and who might attend, and spend time questioning the congregation who come to the Saturday event and then make (and check on) some findings announced after the service on the Sunday.

You might ask for such an assessment (properly speaking, an evaluation) if the church is weak and you want help to turn it around, but in some ways the Unitarian church I attend is on the up and is friendly. 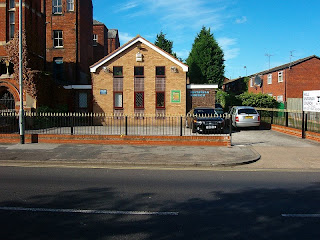 In other words, it hit a low ebb and has since started its own recovery. For example, a chap who does the website has been attending for less than a year, and I'll help him when he takes his first service. There are a number of other attenders who have not been there long.

However, the church called in the team because it considered that it wanted to get a minister. Like many Unitarian churches, there is plenty of money for a minister but the difficulty is finding one. A glut of ministers are retiring and there are simply not enough in training. Even good pulpits near other Unitarian churches cannot get candidates. My joke is that if there are any bellyaching Anglican priests out there fed up with saying what they don't believe, then there is a job and more where you can adjust yourself towards saying what you do believe (in conversation with a congregation). Apparently the next preacher at the anniversary service is an ex-Anglican. There is a cultural shift in church life, of course, but here is a possibility after all. Having had two ministers in short succession after a very long ministry (the last up to 15 months ago), and being out on a geographical limb, and having a broad spectrum theologically, my church is one where finding the right minister is very difficult anyway.

It's not my place here to go into any detail about this, because it is for the congregation to handle. Still, in general we are high in proportion of males and new people compared with other churches and chapels. 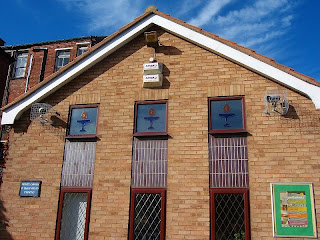 The first thing we did was tackle worship, and we have a high proportion of services we take ourselves, and this will have to rise. This is do-able. We also have the problem of a lack of a pianist among the let's say 30 we can draw upon. So we have CDs and I have been editing a few recently to expand choices. Indeed I have today put some taped organ playing from our last organist on to the computer from which anything can then be done. The importance of a 'professional' approach to worship is known by all of us, and in a sense all have experience now and some have training to some extent or other.

The membership is up (incidentally I am not a member, I am just a friend). There is no membership service, but just a name in a book brought into use with the recent demand. There are many Unitarian groups people can join. I'm a member of none of them, but occasionally I look at the NUF discussions. I used to have more fun 'terrorising' evangelicals but they have become too off-field now to even provide a different point of view. A point arrives where, really, I have no more in common with them. Anyway changes are under way regarding notices, noticeboards, and the like. The magazine produced once every two months looks good but will get a content overhaul as a result of this visit, to be a more person based publication, and a reordering of content inside. I have written pieces (too long, actually) about services and hymns for CDs, but one change is to be people providing more about themselves and what they do. The website will have a few small changes: incidentally, as a website type person I'm more than happy that a new person is doing it - I believe in new folks getting involved as quickly as possible.

Finance was looked at, but the upshot is that there is money as needed. One thing that was done in 1977 was a low maintenance building replaced the previous steepled church. It is warm, a provides a functional space and can generate income much of the time. We have heard about a local church in Totley that removed Tai Chi activity - the Sunday visiting minister lives there! - but we have a yoga group that hires the hall and its leader joined the church, someone who used to be an Anglican and when he takes services gives them an Eastern and meditation flavour.

Governance is via the elected trustees who form the committee and a congregational meeting, and these alternate each month. What will be different will be more operating teams, a spreading out of jobs.

One of the aspects of he, me and the website chap all sitting together on Saturday and interacting was that we were given an enhanced role regarding worship, but actually he likes to be inspired, and the workhorse aspect of it needs a different approach. So the recommendation was adjusted. And all that is after the next three months of provision anyway.

So the question is, does this church get a minister or not? The answer is you might want one and not get one, but also everything might be done right and you still get the wrong person. The up curve might be upset. My own view is that there is a life cycle to the good times and the difficult times. For example, ministers come in, innovate, there is change and renewal, but there is also a peaking, and then there are difficulties by which a recovery of sorts is needed after sorting out problems. I suspect the collaborative approach has a life cycle too. On other other hand, it is not as regular as a product life cycle. We can all monitor, in churches, when things start to become more difficult, and when criticism is under the breath.

We did do that hackneyed but still useful SWOT thing, and there is still an age issue as a weakness for some managing things and as a threat of continuance - but the are numbers rising despite five fairly recent deaths. It is a friendly, broad, warm and clean place, though a dispersed ministry can lead to a pastoral deficit. In the end, ministry, however it is generated, is an opportunity for the future. You can advertise and notify but the advertising and notices have to be matched inside by the character of that ministry. What development has to do is promote the quality of worship, the interfaith content (and contacts) side, we think, and the people side for both existing and new folk.
Posted by Pluralist (Adrian Worsfold) at 06:39

The choice of a minister in the Unitarian denomination,as in other non-conformist churches,is a crucial appointment,far more so than in the liturgically ordered churches,where as long as the services are conducted in an orderly fashion,most of the congregation will be kept happy whatever the intrinsic qualities of the incumbent may be.An inspection of the GA directory will show that the tenure of ministers in most Unitarian congregations is very short - less than 5 years,with very few long pastorates ; I am not aware that there has been any study of why this is so.There may be fewer ministers in training but my informal impression is that the quality is higher-forecasts of the demise of the denomination within a generation are not likely to attract any but the most dedicated and determined,as it is a lonely job,especially for the Unitarian who is likely to be shunned by many of his local clerical colleagues in the mainline churches.How many remarkably talented and inspiring leaders can we hope to attract to ministry,given the low ebb to which many Unitarian congregations have sunk in the last quarter century ? Like you I believe that every institution has a life cycle and it is only when the organisation is all but defunct that 'new life' will arise.

Yes. One of the harsh facts of the matter is that many a congregation has to bounce. It seems not to change and emerge upwards. In one sense the Hull church looked over a cliff, but it had always been more flexible, so a crisis was earlier in management than might have been. For some the bounce is instead a fall through the floor and that's it. Some places have started from scratch or from distant memory but it is a much harder job to do that than to revive something that can continue, however dire it has become.

But Unitarians are there first. Watch how the other denominations go as they head towards 2050 (the Peter Brierley date of structural implosions). The Unitarians do have a present day unique selling point, for a minority of churchgoers, and other Churches in their increasing sectarianism are doing Unitarianism no harm at all.