If it looks like I'm taking a pause from blogging, it's because I'm suddenly doing other things. The upshot of the recent Congregational Assessment I attended is that I volunteered to be a librarian of the books and other documents of the Unitarian church I attend. This means listing what there is on the shelves and monitoring its use.

I shall put some of my own material in there as well. It helps people taking services, especially when there is no ordinary service book just to pick up (though I have also provided two 'emergency' services which are pick up and go services). I have deposited the print outs I still possess of my own services and also could add copies of the In Depth material presented on the other side of the River Humber.

On which point, the discussion on Tuesday's In Depth was fairly limited around basic historical material (the Reformation) with some talk about understandings of the Eucharist as derived from all the different views exposed at the Reformation. A lot of conversation was simply off topic, and why not. Some was about the many people who don't like the religious boat being rocked, so I joked that some people are in the boat, some people are rocking the boat, and some like me are in the water. Did I have a lifebelt? Not thrown from the boat, I indicated. 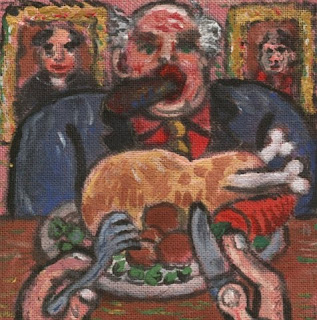 I also mentioned the local deficit financially, whereas many a Unitarian church has no difficulty financing a minister - they just can't find any. I mentioned of some Anglicans who had crossed over, but in the interest of balance said about the liturgical history writer who'd gone the other direction.

The next meeting is in May, and this could either be a moment to come up to date with that evangelical material, or again do history with an in depth look at the Oxford Movement proper, so that all the background is done before looking at all the present day reactions against recent 'liberal' controversies and movements (that's the idea of having done Augustine, Aquinas, the Reformation people). I have a very in depth book about key figures of the Oxford Movement.

There was some discussion too about whether ordinands do the material that we have been doing now over so many weeks. I said that the parish priest-in-charge told me that the material I have been presenting is at a higher level than ordinands would study. "Thought it might be," said one.

Another thing I am doing is processing and collecting music for the Unitarian church because it lacks a piano playing musician or organist. Yes, adverts have been placed and all that. There's a tape of fine singing from Harris Manchester College where the idiot at the recorder clunked the buttons before the last note of each hymn was complete. I have tried to process these. There is a first CD of other hymns, all in high background noise mono. It makes you wonder if anyone thought about what they were doing. I've processed these through anti-noise software and more. Then there is a decent CD of other hymns. Then the new hymn book supplement has two CDs also properly recorded. On top of this, I have used public domain organ playing to collect tunes and edit to the precise spots 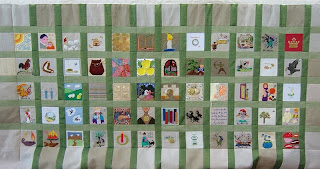 to get the right number of verses for the Unitarian versions of the hymns that use those tunes (and some that can use available tunes). On top of all this, the Barton Anglican Church recorded its choir twice. There's a 1978 record that was put to a CD where most are usable, mono and stereo, and then a tape from 1995 of the choir that I am just about to grab and later process.

So there are extra wires here in my study with the middle bit of my 'hi fi' CDs and tapes radio player, where phono lines out go to my computer line in, and I am using sound grabbing software to capture the sound as it appears and thus save such analogue input digitally, as uncompressed .WAV files to be processed ever afterwards. I'm told by the Barton Church website man that my results of his made CD are better than the original and I have sent him another example of a noise cut and processed piece.

The business of extracting music can take as little time as playing a cassette tape. You can simply press 'stop' and then 'record' in a gap. But first you work on the levels and all else, and make sure that no microphones are operating and the like. The processing takes much longer and can be many different attempts.

I sent this assessment of a tape to an involved and interested friend:

I've taken all the tracks (including the 'sentences') from the tape of the choir in 1995. There are only three 'dropouts' and minor through the lot. The organ does sound like it is dragging a bit. The levels are low, but that's because during the Magnificat it hits 98% on one side, and high levels in Geoff's rendition of Thine Be The Glory. But a male singer let's the side down in one or two, including an incredible bum note in the Magnificat. The problem with the low levels is hiss, which I can remove at the cost of some 'metalising', but something that would drive me nuts is removing the pre-echo that exists. It is possible but the solution might be worse: the problem is when I normalise the levels by amplifying. The choir - well the voice - has a piercing sound and when a cassette tape wraps around the spool the magnetism on one layer affects the next, so a quiet piece becomes a pre-echo what is about to be sung or said. Usually master tapes are thick enough to stop that, when they used them, but cassette tapes are not.

My guess is that all these tracks need speeding up and lifting, but the organ will never sound quite right.

So the longer business of processing on some at least follows!

Posted by Pluralist (Adrian Worsfold) at 01:18

One of my interests is sound recording. I have produced two albums in the past year. I don't use anything fancy, just Audacity which is open source software.

One trick which might help you with the mono tracks is to use the VST plugin MDA-STEREO which creates a mock stereo effect and make the Mono tracks sound more in keeping with the other stereo tracks.

VST plugins can be used with a wide variety of sound editing programs and I think all the MDA ones are free. Here is a link to them:

Here is an example of something I enhanced recently:

Many thanks. I dropped these MDA plugins into the Audacity plug in folder but, as far as I can see, they are ignored. I must be missing something.

Yes, you need to install the VST bridge:

Thank you again. I'm very pleased you read this blog! Quite why you were reading a religious nut's blog I don't know, but it proved to be useful. I will return to the topic of hymns at some point and the use of Audacity, partly because I want to use that headphones graphic in pointing to the website, and I might make something artistically similar for myself.