I have not only been offline for a long time, but off electricity from Thursday morning until Saturday morning after a flood in the bathroom at 3 am caused many waterfalls in the kitchen. I dialled 999 for Fire, and he isolated the corroded expansion pipe to the bathroom sink. He also put a hole into the bowing kitchen ceiling below to stop it collapsing. I went to try to sleep (I didn't) and at 6:15 am went to the still usable toilet, and back into bed at 6:20 am when there was an almighty crash. There was nothing to see in the bathroom, but a look downstairs and the ceiling had fallen in. 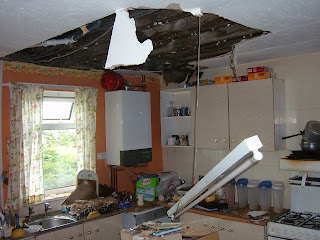 Thursday and after the second try the insurance water people changed their minds and did come to repair the leak and thus the sink could be used, but as it is not properly attached I signed a get out of their responsibility should the sink move and water spray out elsewhere.

St Mary's Barton curate and husband were very helpful, on the scene in a flash 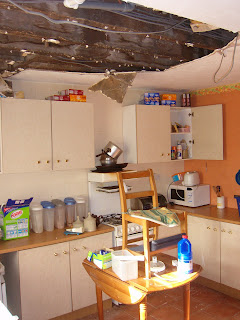 Thursday morning and over to their place and ate, where next day on Friday I showered, shaved, had clothes washed, and ate, with good chat both days, and now at last we have (more than) decent neighbours they took my frozen food to keep frozen and also gave me food and drink and enjoyed good chat at their table. Other people in other places were informed and assisted too, including my friends who, on Friday night, did more than assist me in getting the kitchen cleaned up. Items left on the kitchen table were flooded and many destroyed.


An electrician came on the Saturday morning - he had to come because of the wires of the joined fluorescent lights had been trailing in the damp rubble, one smashed and one dangling. He put up a simple emergency light. He also looked at the defunct shower, with advice to continue with baths until the shower unit is replaced, the only practical option. Incidentally, you can see the bottom of the bath from the kitchen, so any slopping over of water will go through, but then this was always the case. There are no floor panels under the bath, only the joists, so water slop always did go on to the thick plaster ceiling below. 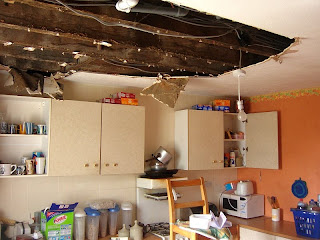 Posted by Pluralist (Adrian Worsfold) at 13:02

I really feel for you!

Adrian, what a mess! My heart goes out to you. You're fortunate to have good friends and neighbors to help. I expect it will be a while before you get back to "normal" living. Much sympathy to you.

These photos are shocking! Thank God for your friends and neighbours.
Is there anything us further afield lot can do to help?

Thanks everyone. This is a case where this medium lets everyone know, but it is inevitably people around and who you know who you find do help and you learn again the value of friendship.