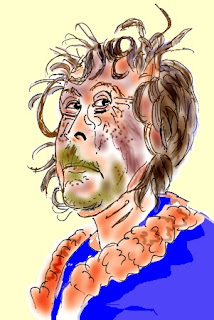 Television is so awful these days that I have stopped even looking at what may be on, and thus I miss what is interesting. It has happened with Peter Owen-Jones's programmes Extreme Pilgrim on BBC 2. I saw the first, the second sailed by and I watched all of the third by pure accident.

Peter Owen Jones is finding another career as a TV presenter. He has been on before (presented a programme on The Lost Gospels), and was spotted again by producers in Church of England: The Power and the Glory (he's the guy with the hat).

The biography is interesting. He has been a priest about fourteen years. He started as a farm labourer for eight years and ran a mobile disco, then was a messenger in advertising agency Wight Collins Rutherford Scott and ended up as Creative Director at Toys in the Attic, when he oversaw high-profile campaigns for the Green Party, Swiss Air and Ryvita. In 1991 he started two years at Ridley Hall Theological College, then became a curate near Wisbech on The Fens and has since moved to three parishes Sussex as a non-stipendary priest (that is, he gets his main income elsewhere). Indeed he is committed to being non-stipendary, and that beyond being paid for rites of passage he thinks priests should earn their living elsewhere if with a skill. He has used his advertising skills for the Church of England. He likes his garden and he is fit - necessary for the programme Extreme Pilgrim filmed when he was 49, for which he did extra training.

The sabbatical was a response to a felt lack of spirituality in the over brained under souled Church of England and a search about where to find soul spirituality. He already had this quest and bias (dated 2005) in a mobile home retreat on the North Norfolk coast - a place to just be. The programme seems to combine with something of a travelogue in The Times, which is obviously another source of income. I have spotted this angle in articles about China, India and about England.

What I warmed to was the solid investigation of spirituality. Obviously it was a programme idea of which the BBC approved (different cultures, places - visual interest - and another angle on religion). Such spirituality was across boundaries. So he participated in Buddhist activity, and in the Kumb Mehla, and in the harshest spirituality in the region of the oldest monastery in the world, in a cave for three weeks with father Lazarus, the only isolated monk there, nearby but neither him nor the camera crew visiting Peter Owen Jones for three weeks.

The Shaolin monastery did not impress the participant, but the monastery up the mountain did, run by a Buddhist master called Shidejian, who guides around 20 monks. There he realised that by letting go, a detachment, that a kind of love that was collectively orientated took over. In the third programme he enjoyed a kind of bonding with his camel train team, and then got worried about scary demons for the up and coming isolation of the cave, discovered at the time how the slightest noise was magnified in the utter silence and barrenness, and did show some stress, but then came to be with that silence. The middle programme (I have read about) had him spending five days being one of the twenty million massed at the Hindu Kumbh Mela, centred on one of a thousand ashrams there, with dressed and made up castrated sadhus and naked ones, and then he went to the snowline of the Himalayas where many of these sadhus live alone, in mountain caves or in shelters under holy trees on the outskirts of towns and villages. The Kumbh Mela was religion in technicolour, and the Haridwar experience was in Jagdish’s ashram with flower gardens going down to seven rivers going to make up the Ganges. There he spent a few nights in a Vasistha’s cave, just outside the village of Thadoga, where the wildlife came into sharper focus and people gathered. Dressed as a Sadhu, villagers knelt as he came in. He discovered that comfort is mental, that Indians know how to smile and about the strength in not killing a scorpion.

As someone who has spent some time going weekly to a Western Buddhist meditation and, in addition, to other Western Buddhist events, and reading their literature, and also going to a few Tibetan Buddhist meditations and a centre at York and then Kilnwick Percy (to where the York Centre moved) I could understand what Peter Owen Jones was discovering at the second temple (and what was amiss at the first). I have spent no more than a long weekend at a convent, but there was a silence and peace there that had a numinous quality.

What we are talking about here is some connection with what is called salvation. This means, for me, a kind of inner quality being released, and it is not via being comfortable. That inner quality may have some sort of greater existence beyond our own consciousness - who knows. Even if we just go the way of the worms, or up in smoke, there is a freedom of non-attachment while alive which is the opposite of selfishness, as discovered by those who get on with it.

These freedoms come in Christianity - letting the liturgy pass into and through oneself, and binding together in a ritual of gift, give and receive, and silent staring - but they come equally with other faiths and approaches, all of them tried, tested and valued - some severe and some a middling approach. They kind of tell us not to be too worried about tomorrow, even as it looms and threatens.
Posted by Pluralist (Adrian Worsfold) at 18:43

If it truly matters to them whether their members kneel in prayer or face towards the bible during the gospel readings, they probably can’t cooperate too closely. Although isn’t the whole point of being liberal that you accept others where they are and don’t need them to see things your way?