A friend was telling me last night about the long term decline in shop takings. Over the ten years sales have fallen. So to maintain profits, fewer staff members have been employed as well as the family, down from seventeen to five. There are other matters to maintain trade too. Even if only one person shops between 9 am and 9:30, to not open means a loss of that sale. When the shop closed for his mother's funeral, people thought the shop was closing down. People are therefore such creatures of habit and appearances are everything. Today, although trade is reduced, the same space is needed (his shop underwent large expansion into neighbouring space) because today people need all the display options shown to them - no longer can you just stack items high and let people choose from what they know. Christmas lights, for example, had to be seen on and off. These days potential customers use mobile phones that show their indecision, and when they ask the shopkeeper what they might buy the shopkeeper should always give them a definite decision. 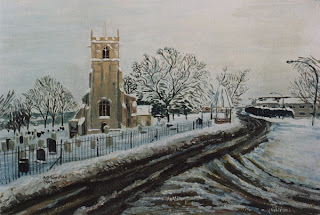 The relevance of this for this blog may not be obvious, but my reply in this conversation was about churches. We are talking about a public out there who is as indecisive and who does not know what goes on inside. The first rule must be to have services on every week at the same time. It is no good having them at 6 pm on three Sundays and 4 pm on another, or 9:30 am on three Sundays and 10 am on the other. I remember turning up in the evening on a number of occasions only to find the place shut, and indeed one time said to myself that I am not going to bother coming any more.

The second point is that you can change the content, within the same times of meeting, but it has to be assisted. One of my friends is a Methodist who found going to an Anglican church with its sung responses very strange, and that no direction was given. I said how this is the same where I go (there is some direction, but much is assumed - do members of the public know what an "extended preface" is?) and that whilst the Methodist minister's theology made me react almost violently (I said there are Anglicans who would agree with it, there are Methodists who would agree with the Anglican priest - so it's not about denomination), she did in her own church give constant direction (even when not needed) and the sound system was much better. A suggestion is floating around in the gossip area of having seasonal printed liturgies so that people can follow what is going on more readily than the confusing Common Worship, which takes people on a trip back and forward through the book or booklet and leaves people not knowing where the person taking the service is reading from (for example, choosing Eucharist Prayer A but then suddenly reading something that is not there).

The result of this "acquired taste" and need for a learning curve, never mind the habit of churches of opening on different times on different Sundays, is that people simply won't turn up who may do. Like the shop, everything ought to be laid out as simply as possible and explained. If not, then the drift downwards will go on.

Of course Christianity is a complex and deep tradition, and it requires learning, and there is a learning that never ends. However, there is no point building high walls to participation. If you do, you deny to the don't knows the chance to taste and see. Everyone starts at the bottom, and that's where the entrance should be. Many who have been around some time also appreciate the continued assistance.
Posted by Pluralist (Adrian Worsfold) at 15:37

I completely agree - the church can't afford to be a club that only the initiated are welcome to. I think that sometimes the initiated just don't see why it's a problem to be given a small library on entering a church, with the key bit not reading from front to back but leaping backwards and forwards at crucial moments. They're used to it, hence find it easy, hence genuinely don't understand that someone new to it might struggle.

My own mother, who is nevertheless challenged on this anyway, spent her whole time going backwards and forwards in the booklet. I pointed where we were at each point (a said service) but it just leaves many people confused. She didn't want to come to the service with hymns, and will say what hymns she recognises. I just do not think that the insiders recognise the issues here.

When you do school teaching and you scratch your head in puzzlement as to what you must do to simplify and simplify again (even with sixth formers these days) then you might get the point. Some people have agreed with me, and me with them. I'm not at all unique in this viewpoint! But it was just what my friend was saying about shop opening, and method, and so my reply related to my experience and viewpoint.