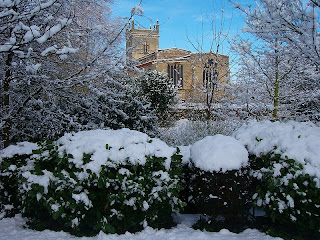 Those interested can see the intercessions I wrote and conducted, with additions placed in as used, at St Mary's Church, Barton-upon-Humber, today. They drew positive comments from some people.

On a note relating to previous topics here, the preaching just before my turn included the assertion that the body that ascended, "whatever happened", was fully "human and fully God", and "not a piece of ectoplasm". So I asked the preacher at the refreshments, "Are you sure about this?" The answer was, "Oh yes. Very sure." This evening, able to push the point again, I asked, without any lead in or introduction, "Are you sure: are you very sure?" The answer was, "No of course not," and: "A sermon is not a theological treatise." "Aww!" was my reply.

I'm sure similar was said in sermons up and down the country, and especially around the world. Some of us had a little chat in the morning at refreshments, one complaining that such sermon assertions keep seekers away from churches. Another said disagreement with such supernatural assertions is used as an excuse by those people who stay away. The complainant agreed in so far as Sunday is a busy day for so many and churches aren't even considered for attendance. I said the reason people no longer attend is leisure based, that a sociologist would write that churches at one time used to provide educational and welfare provisions [includes leisure] but these ended with affluence and the welfare state and the churches specialised to their core activity. The Hull Unitarians for example provided a vast outer circle of activity at one time for working and middle class people, with an inner moneyed and middle class worship attending core activities. All that has gone.

Still I also maintain that seekers find this language of faith puzzling at best, as to why anyone would want to maintain it never mind believe it; earlier I had spoken with one of those chatted with above about the BBC Four programmes he had also seen about the mediaeval mind, and that it was such a different way of thinking from now. We discussed the programme where the resurrected body of a hanged man had to be not only not a botched hanging job, but supernatural via prayers to St Thomas, rather than the work of the spirit world. Eventually the monoglot Welsh speaker turned up and it took fifteen years to decide the miracle attributed to St Thomas. We also talked about Aquinas rescuing Christianity from the onslaught of the modern knowledge (in the monasteries and clergy) released in Spain as held by the Muslims as originally imported from the Greek world.

In my view a transformed body "fully human and fully God" is better connected with the mediaeval mind of humans, animals and spirits, and whereas they would understand it easily we would regard such a mystic fully human fully God figure, "whatever it was doing" when ascending (a slight and selective concession to modernity due to the loss of the three decker universe that the mediaeval mind also believed in), as all rather bizarre.

I maintain again that this attempt to modernist-historicise something so clearly to do with the perception of another culture back in time is ugly; that the attempt to force history to try and make it "true" loses the theological point right at the very beginning.

To say what I think the theological point is produces another discussion: but for me it is about direction and succession of the early Christian community - but that was not the thrust of the sermon, which was about presence and guidance another way after the physical resurrection. That begs the question why the physical resurrection had a point of ending at all, which would have been the question asked by the early Christians - why if he was resurrected don't we see him any more, and why did he go? Answer, well he went but did not quite go and we are blessed to be his leadership now because the leaders had been visited by the man himself who now reigns above the crystal starry ceiling.

Another thing I said with two others was that if the charismatics and the like are at the entry, inviting people to hop over the barrier, the liberals are at the exit door trying to stop people from leaving. People hop over the barrier and then, as they take an interest, read more and find it isn't like they thought it was. They are like on a conveyor belt to the way out. The liberals try to keep people in.

My intercessions try to use a language that the Church would recognise but is also human and not out of date in thought patterns. I am never sure it is possible.
Posted by Pluralist (Adrian Worsfold) at 17:31

"People hop over the barrier and then, as they take an interest, read more and find it isn't like they thought it was. They are like on a conveyor belt to the way out. The liberals try to keep people in"

Yes, it's when they realise that God's unconditional love is apparently hedged with more caveats than a shoddy legal contract that they feel cheated. Rightly so!

And liberals point to a way of remaining in the church with integrity and truly trusting in a loving God.