TEC and Its, er, Limits

Now listen in, all you members of the religious right, you rabid raving fundies, you upholders of the doctrinal details as if religious faith is the same as great chunks of historical detail, and you accusers of The Episcopal Church of adopting Unitarianism. I have read such over and over again....

Well, I have at last found out that I had a piece written on the crucifixion and resurrection for The Daily Episcopalian on Episcopal Café rejected on doctrinal grounds. The reason, Jim Naughton told me (without spilling private conversations) was that whilst people do not need protecting from opinions like mine he cannot publish and give tacit support on a website sponsored by The Episcopal Church.

So you had better read it here instead and see what you think: should a website sponsored by The Episcopal Church display my views on crucifixion and resurrection?

Of course, I already took the view that The Episcopal Church is not Unitarianism Mark II, and indeed made this the subject of another offering, and this one is a problem too, because I ask how close is it to Liberal Catholicism - and Jim isn't sure people know what Liberal Catholicism is, and he has been "working on" my piece. I've just received an email that says it will appear on Saturday and Sunday. Well, in order to find out more about this odd tradition, there is a pile of information on my website!

So the original of this one is here, and it has some links added; however, given that my belief-based views are apparently unacceptable to The Episcopal Church the answer is going to be perhaps not, that it does not relate to Liberal Catholicism either - and anyway I am ambiguous and rather think Anglicanism is its own animal.

By the way, as an habitual time waster, I went to the Ascension Day service this evening (May 1st), that one where people have trouble with the three decker universe (Jesus ascending, people looking up) and 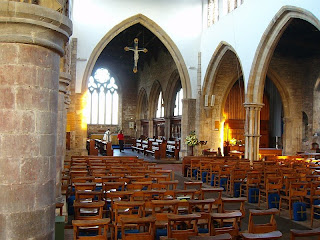 having time-travelled video camera trouble again, and yet somehow carry on thinking that bones disappeared into a transformed body as if the video camera would pick that up. Some consistency please.

And after the service at refreshments and socialising the consensus seemed to be that to have an article refused on doctrinal grounds with The Episcopal Church is something of an achievement.

Oh I'm doing the intercessions to an unknown God on Sunday. I do keep wasting my time don't I?

The Pluralist website has a wide range of theological and religious sociology articles and there are spiritual resources too.
Posted by Pluralist (Adrian Worsfold) at 00:25

I've been increasingly disillusioned with the possibility of mainline denominations serving as a vehicle for progressive Christianity, and the rejection of your article only serves to confirm my worst fears. All the interest that you see in some churches in "progressive" faith are really just cases of dabbling. When it comes to making the leap out of the dark ages, the churches by and large refuse to do it. I am just about ready to give up on progressive Christianity.

Pluralist asks, "....should a website sponsored by The Episcopal Church display my views on crucifixion and resurrection?"

Well...since you are not a member of TEC nor a noted theologian or academic, there really is no good reason why your speculative views should be published anywhere apart from on your own website, is there?

I love your article. I agree it is something of an achievement to have an article refused in the Episcopal Church, especially by someone such as Jim Naughton. This has always been my one of my favorite questions: Why can we see the myth in other peoples' religions, but refuse to acknowledge the myth in our own. If we rely on human language descriptions of God to affirm our own and reject others, we are in big trouble, because I'm pretty sure they are all wholly inadequate. Thanks!

I may not be a noted theologian or academic, but I have the same access to theological and academic writings as anyone, and an ability to handle them whether noted or not, and I was invited to write about crucifixion and resurrection by Jim, as were others, and mine was rejected because he wasn't sure such a view should be published on a website sponsored by The Episcopal Church. I did not write this piece for my website, but for that one, and in that that one has rejected it, I now put it on mine. Episcopal Café will display an edited version of my piece comparing The Episcopal Church and Unitarianism and Liberal Catholicism, but I can display the original. My article about liturgy being sufficient in of itself, in reference to local events which produced a kind of internal museum of forms that had a life within itself, after the celebration when bones were returned to a church now a museum, was published. I shall write some more for a May deadline too on a topic I have yet to dream up and it will be as "liberal" as the rest.

The problem with progressive Christianity isn't the construction of it, but the institutional problem, where some sort of pathway litugical approach that does recognise the nature of myth seems to be unacceptable to too many harbouring illusions of history and the "what the video camera would see" mentality. They give too little to the processes of story telling, the process of writing, the difference between theology and history, and too little regards the place of the arts and imagination in providing rounded support towards resources for an orientation in one's life.

I think the idea that TEC is theologically stridently liberal has always been a fallacy. Many hav stressed just how mainstream they are. They are progressive with regard to the inclusion of women and lgbt people, but that does not automatically translate into an exclusively liberal theology of everything else.

No reason why it should, really, and it's only our increasingly strident public discourse that insits that people who support gays are automatically to the left of Spong in everything.

Being inclusive towards gays or women obviously doesn't necessarily translate into being progressive on other matters of theology (the blogger "liberal pastor in burnsville" discusses this topic in his most recent posting). But what disturbs me about this act of censorship on an Episcopalian web site is not that I expect all Episcopalians to be in lock step agreement about the resurrection or other such doctrines, but that these ideas aren't even being acknowledged, discussed, or tolerated at any sort of "official" level. (If you want a church that censors what theologies can be associated with that church's name, you might as well be a Roman Catholic.)

Is there actually an implicit (or explicit) assumption that everything published in the Daily Episcopalian reflects the official theological positions of the church? Can there not be a diversity of views and interpretations within the church, and can't an official web site reflect that diversity? Is it really true that if any specific opinion appears on that web site, it is just assumed that somehow this is the side that the church officially comes down on?

There is nothing in that article that is all that startling in comparison to what some well known Episcopalian authors say (I'm thinking not just of Spong, but also Borg). It's not that I would expect all Episcopalians to share this point of view. But I also would expect that a church that is seriously committed to reason and an intellectually viable would not actually go so far as to suppress progressive theology, or at the very least to treat those who take biblical scholarship and progressive theology seriously as second class citizens within the church.

Personally, I am appalled by what Naughton did. I had help out hope that the church was a big enough tent in which the Borgs and Spongs could claim just as much legitimacy as the reactionaries. But in fact, it isn't true. Any hope for a burgeoning transitional movement forward is probably asking for too much. The Episcopalians are just as much locked into their own form of theological rigidity as more openly conservative denominations.

Recently, the openly gay Bishop Gene Robinson, made it clear that his being gay had nothing to do with the "essentials" of Christian theology, including the resurrection, which presumably means the bodily resuscitation of Jesus after his death. This illustrates what we are talking about here. Episcopalian lay people might be allowed to flirt with progressive ideas and accept the findings of biblical scholarship, but they don't dare do anything other than flirt. They are still expected to toe a certain line. And even if the resurrection stories in the Gospels are contradictory and clearly mythological in character, they are apparently supposed to pretend otherwise.

Thanks for that, including about Liberal Pastor in Burnsville. I suppose the same might be the case with a Church of England connected website, that it would find it difficult also to print views like mine. Jim Naughton is just doing his role, by the way. I'm not critical of him at all.

It is just that these Churches are indeed missing out on the full range of theological encounter. By creating boundaries they seem to want to suggest an identity and security of position, but it becomes false when positions are not justified in the face of actual debate and the presentation of ideas is on the lines of promises made rather than necessary conviction. It is the equivalent of public relations instead of truth seeking.

Yes radicalism has had these social, historical/ biblical and philosophical strands. There are many quite "orthodox" who are socially radical. It was interesting that at the first Sea of Faith Conference a number of social radicals came, who soon realised the basis of that movement was the philosophical end - the God question.