A Little Bit of History 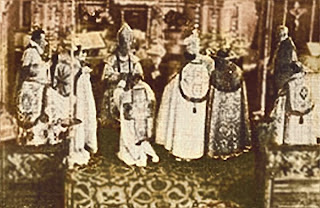 Well well, Arnold Mathew Harris, gets a mention in this week's Church Times.

Thus we see the attitude of the time. Hostile from the beginning. The article also assumed existing English ex-"Romanist" congregations - something of a fantasy. Note, however, that the are called "certain liberal Romanists" and thus regarded as liberal then, never mind the later Liberal catholic development. See here for a summary consideration of AHM's ministry. In those days the Church Times was an Anglo-Catholic newspaper, whereas now it is broader based. They were on to his case, but subsequently he would be something o

f a greater bugbear to Anglicans. By the end of his days he had reordained some 400 Anglican priests. He represented apostolic succession and Catholicism, both of which were in some doubt among some Anglicans at the time, and yet when AHM did offer himself to the Anglicans (as the article recommends) he was rejected by the Anglican leadership.

A Liberal Catholic Metropolitan, Bishop John Kersey, who follows in the apostolic line of A. H. Mathew, along with other lines of consecration, regards the Church Times reprinted article as positive. Since the 1920s, when the Utrecht Union pretended that Mathew's consecration was false, relationships with Anglicans have been poor, but this article suggests better. At the time (1908) the Church Times, as did the Utrecht Union, regarded the consecration as entirely proper, and - as can be read - the Church Times article wished that Latin rite congregations could have come under the Church of England episcopacy. What is wrong with the article is that the breach with the Roman Communion was mainly abroad and from 1870 in earnest and expansion. There were also no identifiable ex-"Romanist" liberal congregations for A. H. Mathew to lead.

Also please see my recent piece published at the Daily Episcopalian about The Episcopal Church and relating it to Unitarianism, Free Catholicism and Liberal Catholicism.
Posted by Pluralist (Adrian Worsfold) at 04:47