Today is the day of the amendment that if passed will allow liberal religious communities to have one ceremony with registration of same sex couples. The amendment, however, seeks a spot where the actual signing is non-religious, presumably by everyone keeping quiet at that moment. It is another compromise, and that's the answer to Andrew Goddard's own attempt to justify imposing restrictions on others. And according to Colin Coward, the Bishop of Leicester will offer no assistance towards religious freedom in his privilege of legislating.

British law is passed according to muddle and compromise, and gets changed according to acceptance. So law is not just about intention, but also about use. I remember teaching and being told by students over and again that Civil Partnership means marriage. In that it has become that equivalence, then laws get passed that move in that direction. Sometimes a law is passed with one intention, operates according to other intentions, it becomes clear that such development has disapproval, and laws get passed again to make the intention (approved of) active and not the consequence.

Something that was once acceptable also can become unacceptable. For example, Bishops voting in the House of Lords was at once time part of the feudal system that the House of Lords represents. It is being altered according to muddle, but it is getting more unacceptable that bishops should be voting on national legislation. So a law needs passing to remove them.

Below is a photograph from my wedding that represents a signing of the registrar. A friend used my camera to take photographs, and they were a bit hit and miss. A bit of a miss and a bit of a hit is the chap at the far right. He was the registrar. 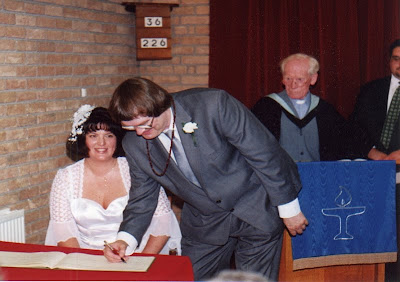 He sat in the vestry while my marriage service (I wrote it) moved along and he heard us say important words to each other. That meant the document could be signed. This photograph is a fake as the document had already been signed. The table was put there and photos taken. The minister was not a registrar because the church had very few weddings and he did very few.

Imagine if Elena sat there was a bloke. Presumably, according to the amendment, the religious business will have come to a halt, the registrar would have been called in (can he sit at the back?) and then documents signed. He won't have listened for any magic words, and in a condition of religious silence the document will be completed. He then can leave (unless he wants a cup of tea) and go. People might then say religious things again. Thus the service would not have the magic words, or if it did he would not have been waiting to hear them nor would they make any difference.

In the end there will have to be magic words marriage for same sex and both sexes, and partnership with no magic words for same sex and both sexes, and each become what they are. But that is for the future, as the muddle settles down. Clearly churches will have to decide what they want to accept as regards their sacred rites.
Posted by Pluralist (Adrian Worsfold) at 14:47

So are you saying that these ceremonies would always have to have an external registrar present? That a religious minister licenced to perform weddings would not be allowed to conduct all in one religious services for gay couples?
I still don't understand at all what the amendment is trying to achieve.

I think that's a good point. It may well be that ministers can apply to be civil partnership registrars. Then when the signing comes they can cease from saying any religious words until it is over. Otherwise (and if religious ministers cannot become civil registrars) the registrar comes along, and doesn't listen to any magic words (because there aren't any) and the signing takes place as if in a library.

Any news yet ? I cld see nothing on line and its late now

I can't see anything, and I've had a look around at the House of Lords website etc.. I'll look for a bit longer.

The irrelevance of the evangelical objection is demonstrated.

ur an early bird Pluralist !
Yes I searched an searched last night --sad I know ; -)

Very very good outcome. Let's hope the Commons comes up trumps an all.

The Lords wld never ahve behaved like not so long ago ! G-d or wot !

The word verification was necessary to stop a continuous stream of automatic pointless emails, and so long as it works this way allows people to discuss and debate while I'm not looking. I might have to remove one or two but so far only removed one. At the moment my website response form is giving most trouble but the idiots who keep sending spam responses don't realise it is my eyes only. Their effort is greater than mine.

'The word verification was necessary to stop a continuous stream of automatic pointless emails, and so long as it works this way allows people to discuss and debate while I'm not looking.' (Pluralist)

No, no, I understand. A very good mechanism.

numbes like some have -- e.g. I am invited to add ribleo this time !

laurencePS
I am enjoying it here a fulcrum refugee ....