The final stage of being a music provider in the church I attend is to plug the gap of music supply. It is to write it myself! 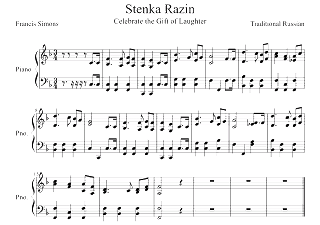 This last week I opened a new hymn book at a tune a service provider wanted, and because it is a song with a Russian traditional history there is no usable source for it anywhere. So I found a music composition program that forces correct composition as you put in the key, the timing and the notes. So from a personal base of musical ignorance (I cannot read music) I laboriously copied a tune from the hymn book and, when done (a steep learning curve but speedy) not only did I get a decent .PDF output of the music but it also produced a very good piano .WAV output that was much more refined than the usual .MID output (the old fashioned but instrument-transferable and low kilobytes computer generated sound). Able to hear different instruments too by composition copying and pasting, I created a four verse hymn of varied instrumentation. To do the introductory part, I could have edited a sound file; instead I made it much cleaner by doing it from the composition.

In future I'll keep the instrumentation more simple (in the same way a word processed page achieves more through less) but it does mean nothing is beyond the preparation and production of music. Who'd have thought it. I'm not actually taking a service again until February, so unless I become a one man band then someone else will have to sit behind the curtain and press the pause button for what I have prepared - as I do each week.

People keep talking about me and this whole provision as if I am something of an expert. I am not. I really am tackling a lot of this from ignorance. But the success is that I have an objective - by illusion and reality to produce music as convincing as possible and at the highest quality possible for a service. All it needs then is bit by bit preparation. And next week I put in motion significant improvement to the delivery, such as the church buying a mixing desk and new amplification where I can establish a variety of means of provision.
Posted by Pluralist (Adrian Worsfold) at 02:58

Ah, "When the carnival is over"! It appeared in an RC-Charismatic book in the early 80s when there were still plenty of people around who remembered the Seekers back in the 60s