My comment is too long to process regarding Lesley's blog entry on Blogging Skills, so here it is:

She had said [compressed and denumbered]:

Blog at the same time each day, following a predictable pattern (trying to limit it to two posts per day). Keep it short. Be yourself; Interact with the current community and don't worry about trying to attract new readers. Be welcoming if new people do visit. Try to keep a reasonable stack of posts so that they can be reviewed and deleted if they are rubbish. 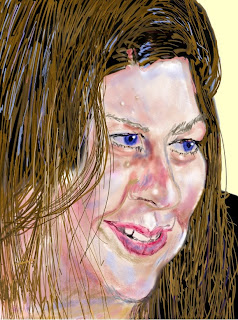 Be fairly strong with people who put me down in the comments. Only blog for fun. Visit other blogs and comment.

I don't deliberately blog each day at one time; I often end up doing that though, as a thought grabs me towards the end.

Sometimes mine are not short, and really they are website material waiting to be transferred in my still to do overhaul. But I think from time to time something like the attitude of 1836 Unitarians is interesting, and someone may say crumbs does he have that book produced in 1936 - yes I have that book. So that goes on some length. And so do fantasy ones that can take some time in production. One is on the way now, and Rachel Marsovenus is completely puzzled. After I switched off last night new ideas went into my head. In between a quick blog might appear: thus a Sea of Faith email prompted a blog entry and then a quick new cartoon of David Paterson whilst I'd spent some time drawing another.

The fantasies and realities reveal myself. I tease as well. I write in code too, putting things within things so if you suspect underlying messages and motives you are probably right.

I first attracted attention in a bigger way when I transcribed a college principal's lecture to a bunch of fundies. Since then I leave it to other blog people to decide whether I write anything of use and I don't care.

I'm a bit weak on commenting and I don't get many, but like a TV programme with no viewers - so many seem to have seen it! Some come late though - that doesn't matter.

I don't build up posts. Something happens and I shift. One in production is enough. If there is nothing to comment on, it means nothing is written. But it is not always news driven. I use a text editor before I use the blog entry space, like now.

People can say what they like about me. I don't care. Like Madpriest, worse things have happened. I have boundaries, however: the blog is not a diary. I might have just a few people in mind even when saying general things.

I don't just blog for fun, in fact I can be deadly serious even when most fun using. If I get close to the bone, it is because the motive is more than fun. I know my portraits are horrible - the closer they capture someone in my eyes they get more horrible and I can't help it. Unfortunately I've got a corker yet to be released (I'm not putting it here). By the way, anything I put out I make available: I've never said, "Oy that's mine and my copyright." I've used enough Open Source and may as well chuck some in. If other people use my horrible portraits then I'm flattered even if the subject isn't.

I visit other blogs not just to comment but for information, building up 'pictures' and patterns.

Now the decision to make this a comment, or make it a post. That was decided by the refusal to take this.
Posted by Pluralist (Adrian Worsfold) at 13:31

" Lesley's blog entry on Blogging Skills, so here it is:

The drawing is not so simple; I'm just thinking various parts over. I'm being cagey just to create space before release.

My verification word is 'Ionist' - isn't that a scientific term, or nearly Israeli?

Adrian, to my shame I have not read your blog before (partly because I have overlooked to take Lesley's good advices).

That is now corrected - and gladly so. The first scan has been edifying in the extreme. I can dump Fellows now.

Thanks for this - though I will leave the sketching to those of you with that skill!!!

Hi Adrian - not rude at all... just so weird seeing myself referred to in the third person... I guess in academic papers I was referred to as 'Fellows et al', or 'the author..'

Hi David, no news to me that you ignore my advice :) Dump away - Adrian is a worthy person to be dumped for :)

puzzled? Am I? Remind me.

Thanks for posting this. I really enjoy reading your blog very much. Excellent content.