I've two things to blog on today, so I'll leave the most important to later and discuss here first (it comes lower down anyway) my reflection on attending the Ministry Inquiry Day. Ten of twelve expected attended plus the two presenters.

Rev. Alex Bradley is the newish Principal and was there for half of Rev. Danny Crosby's training, who is now in his first ministry. 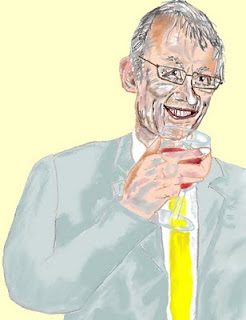 Danny was giving a student's eye view, which was all positive and constructive - the negatives were within the positives. He said that the course also got him over his resistances to the Bible, and was able to tackle it in a constructive manner.

This refers to the fact that the Contextual Theology approach to the training is Federation wide, and Unitarian students take part in the same University of Chester regulated course as everyone else. All essays are in the context of the practice. The first year involves a placement under a senior minister and the second involves a nine month pastorate.

There was also a hello from the new Baptist and Federation boss and a pushed along more general overview of ministry and what it involves - even the problem of a long term memory of a 'much loved' long term minister who retires that is followed by a series of unintended interims. Some laughter there as to whether that included anyone in the room, but not necessarily. However, it was something I recognised.

But, for me, what undermined the presentation was the news that the new Contextual Theology course started two years ago, and that changes mean a likely return to the University of Manchester and an ending of the course by the time anyone in the room (or elsewhere) starts. Alex Bradley said whatever, there cannot be academic study and then sending someone out to wreck a congregation, so it will always be practical in some sense. Apparently the University of Chester is particularly rigid on hand in dates, but this isn't the reason behind the likely coming break.

But I asked the obvious question: what happens with a religious humanist taking this course. Danny said that there have been religious humanists in the past. Yes, well, in 1989 I was a religious humanist, with an eye for symbolism, and I suited none of the chapels where I was sent. And I would imagine myself in a Contextual Theology class writing some rather imaginative theology as a means to reflect on a practice.

Alex didn't know what happens at "HMC" or "the other place" other than the papers sent through. These indicate a more parcelled and separated out course, which of course is taken by Unitarians alone among liberal arts mature students.

It is a strange reversal, perhaps, that the more ecumenical approach is in the more (historically) denominationalist college and then more Unitarian approach is in the (historically) more broad Church college. But this is because of Unitarians going in with a more obviously mainstream approach, however critical the tutors like the Unitarians to be, valuing their contributions that other denominational students might fear to contribute.

The problem is this: our services in Hull, say, from contributors far and wide, indicate the death of theology as a medium of giving ethical and worship messages. The sermons tend to be experiential and of the thought forms we use throughout ordinary life. They do not go into theology speak. They won't get into technicalities of Christ's sacrificial love, for example, or the workings of the Holy Spirit in the lives of congregants. We don't think like this. But theology in context does think like this, or it becomes a reflection on the remoteness of theology itself.

I'll get to Rachel in my next blog entry, but as I was saying to her you move along intellectually across social anthropology and sociology, and look at structure and culture and so on when being intellectual. I can do theology, and I said to her about postmodernism from two different angles. I did a theology MA (and my dissertation was on Unitarian Universalism too). All I am doing then is saying to the Church, this is what I can offer - who I am - and do you want me in this role. Danny himself said, "This is congregational ministry." That's right, and perhaps I represent an older model of a minister (if I do represent any model of a minister).

I left the meeting no further forward in my own thinking about presenting myself to the denomination again. I've not discussed going with anyone locally because I wanted to approach this with the thoughts already in place. I would think it most likely that this shall just drift but one day I shall either kill it or apply to finish it. The Anglican side was concluded in this respect, simply because my kind of liberality and belief is outside its orbit, and indeed is more outside now than ever, but the issue with the Unitarians remains the role I can provide with congregations as a whole and in particular.

It is interesting how my friend Rachel, who only recognised herself due to events as a revived Christian in 2007, and is now an Anglican curate in 2011, would never have been selected for Unitarian ministry as she would not have been a member for three years [Not so - see her comment as she was on the electoral roll beforehand]. I have been, but technically I am not despite busy activity and a weekly attendance to challenge anyone's. I have no wish to be anything else, and would not be a Liberal Catholic (for example) because I'm not a Christian or Jesus centred. There is no doubt that I am Unitarian on the definition of an evolved faith around its area of liberal Christianity, religious humanism and the contribution of other faiths and philosophies, as well as on a definition of contribution. So this is a structural issue, although it becomes ideological if a congregation has a strong identity on a faith definition and isn't as 'free' as the national publicity claims.

One interesting aspect is the likely demise of Lay Pastor. It is regarded as second division, when it is not. I don't even understand the category, given the low Church nature of Unitaian ministry and the absence of ordinations. Perhaps Lay Pastors, who've done the same training as ministers after all, will get an automatic upgrade. The same issues would apply regarding Lay Pastor. The same issue might be solved if a congregation asked me to be Lay Person in Charge, because that would be a proof of being in place, but then that is the functioning of training. And there was none last time, in that I had no placement other than some visits to three churches, the place I might have gone as a placement not wanting me but another student after I said some mildly critical things about St. Paul in a first sermon. They just wanted a cheap pastor, chiefly someone to take services, and they were refused the student they did want.

So the whole point about applying is whether the Church sees me in the role, and as adding to its resource, even if I can see a role. If it can't, then that's it. But it's not as if I don't recognise the issue. No one can guarantee it, of coursen, but I wouldn't want to just take on an open ended gamble: I'd like it that selection for training indicates a recognition that, beyond disaster and the unforseen, training will lead on to the role.

So is the Oxford arrangement better and does it indicate a difference of result and role? Or is it not the same denomination? I don't think there's that much difference in ministers from one place or the other. After all, Alex Bradly, a Unitarian Christian Association man too, is a produce of "HMC" and clearly enjoys both his ministerial and college roles. What role indeed for the intellectual approach to Unitarianism these days?

Oh and I'd still have trainee ministers at different universities doing a variety of theology and education degrees and all gathering frequently at Great Hucklow, closing both colleges. But that's a different argument!

Posted by Pluralist (Adrian Worsfold) at 16:14

Ah, but just to clarify, had been going to church since a baby and on an electoral role in diocese of Derby church since 2001 but came into a living relationship with Jesus through the power of His Holy Spirit in 2007, which totally changed my life. I felt immediately called to the ministry.

Yes, quite. I realise it wasn't a completely dormant faith beforehand. Anyway, now on to posting about our meeting.

Your point is that in a parallel situation you would have been accepted into ministry with a three year rule as you were on the electoral role.