Stephanie takes services in Hull probably more often than anyone, about once a month. This time she swelled the congregation by bringing her own. She's a fast talker, full of enthusiasm, and can think fresh ideas. 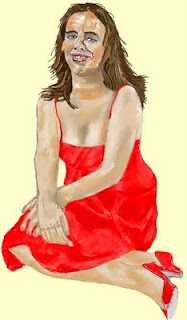 Since she has come to Hull she has listened to constructive criticism and acted on it, so now she has slowed down, she projects her voice better (and rightly ignores the microphone) and adds in more pauses. If I was to criticise, she ran too many spoken elements together in one part between music, how hymns and other music act as interludes as well as their own content.

Afterwards she said she thought about going to a Ministry Inquiry Day but took the view she wasn't ready, and kept having that view. Yet, of course, she is doing ministry, as we all do somehow, and she is also doing it in dialogue with at least this congregation and I am sure with others. She has simply put herself forward to do it, and people took her on, and now she is better all the time. Her previous service was good for its merger of topic and news, quite seamlessly.

I had a little objection to quite a good reflection on miracles in life, that began when her friend and her stopped off at Eyam (the plague village) before coming to the Hucklow Open Day. She was conflating different kinds of miracles. I didn't like the 'explanation' of the Feeding of the Four/ Five Thousand miracle by once someone provides other people also provided, in effect they brought along their own lunches and this explains the fact they were fed.

Given as historical speculation, it was unnecessary and not convincing either, but it it had been more made into a theological point it would have been very interesting. One good turn, miracle, encourages others to help it along. That's not in the story, but theology should be a moving target. The theological point of the actual story is early Churches ritual of the Eucharistic, or love meal, again, and a forerunner of the heavenly banquet, which is why the baskets of left overs are filled and all with operating numbers. I think she fell for the temptation to cover the field regarding miracles; reference to Derren Brown debunking and yet evidence that something can be false doesn't mean it is false just is like tying more knots.

To me it is best to focus on one thing or the other, so that one looks at a contemporary and secular meaning of miracles, like even our view of the Eyam people producing their miracle of non-contact, or a biblical criticism, or about Derren Brown and religion as spectacle.

But I think back again to the Contextual Theology point. To run that sermon and the service through orthodox Christian theology is not the proper context. The proper context was that of the secular world in which we live, of humanistic assumptions (that she did challenge).

The first local I told about going to the Ministry Inquiry Day was on friday morning in the church, and the congregation's 'matriarch' was not present then. Not hearing it from him, she asked me in the car (getting a lift home), "Were you at the college this week?"

It just shows how the jungle telegraph operates, because she didn't get it from the Internet either. Someone, presumably, was on the telephone asking if she knew that Adrian had visited UCM. But she agreed with me that the Contextual Theology is not our context, that it processes things the wrong way around. I explained this is the new competitive Higher Education world, that the Federation had run off to Chester, but would for entrants in 2012 be back at the University of Manchester (probably). No no, the University of Manchester had Unitarian founding roots, but the Unitarian College is part of the Federation, not part of the University. Thus they will get their degrees marked from whichever institution is desired.

Plus she knew that Harris Manchester College, Oxford, is getting more remote with problems as regards the denomination.

It all appears to be somewhat at a distance, and confirms my worries. So - I was asked - what am I going to do? I explained I was thinking of going, then I was going to go with Mhoira the Liberal Catholic, then she was told that from a GA perspective she's not a cat in hell's chance of being a Unitarian minister, and then I decided I'd still go and see. Having been to see, I'm no further forward from that in itself, and all that came from HMC was the paper information sent. Given that lack of mutuality, potential candidates should have been able to visit both colleges. I might then have found a moment to visit Lesley in June as well as my August detour to visit Rachel. My chat with Lesley would have been very different, much more one to one forensic. Something to still imagine.

A placement and pastorate would benefit someone like Stephanie, and so would Unitarian courses with historical information, but would the Contextual Theology? It might give some information about others' approaches, but I doubt it would be directly relevant. Once again, it is not our context.

Posted by Pluralist (Adrian Worsfold) at 04:18

Stephanie says, 'Afterwards she said she thought about going to a Ministry Inquiry Day but took the view she wasn't ready, and kept having that view'. One of the problems with our ministry training is that people apply a year beforehand. Why does it take so long? It's not as if there are hundreds and thousands of people applying. Surely the process could be shortened so that when people are ready they are not waiting years.

Also if there are aspiring ministry candidates perhaps they could be offered a mentor to support their journey from where they are to actually doing some training. There needs to be an understanding of the processes and people supported along the way.