This is quite interesting. The votes in the dioceses regarding the Anglican Communion Covenant are so close they are tipping either way. If ever there is a definition of chaos, it is where something has a tipping point that represents instability.

We know that the bishops include few who will stick their necks out to be accused of disloyalty, so this leaves the other two houses to decide. Bishops might lead but synods govern. But the figures are so close that the results could scatter in all sorts of directions. 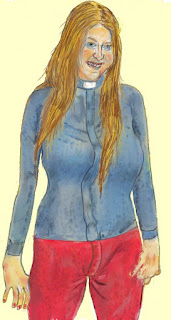 One bishop was against in Cheltenham, and one couldn't say yes or no, but it was the 27 for and 29 against in the House of Clergy that sunk it. But then it was 31 to 30 in favour in the House of Laity. Go to Hereford and the clergy tied, with the laity rejecting by just 21 in favour to 23 against, and then in Bradford, where it was a yes overall, the clergy were more in favour but the laity had 16 for and 15 against. In all these places one wonders about the lobbying on the few abstainers that could swing the vote - in order of bishops, clergy and laity the abstainers were 1, 7, 3; 0, 1, 1; and 0, 2, 3!

Nevertheless, that's now a tally of 13 dioceses against and 8 for, and consulted people are asking if this Covenant is likely to do any good, and if it has potential to harm. For those who want conservation and conservatism, it promises to do only a minimal effort for their concerns, but the risk is the unstated and unknown once such a process is put in place, particularly on a Church that provides the Archbishop of Canterbury. It forces the Church of England into a different identity with a primary international responsibility (which Rowan Williams is trying to enforce downwards via all the unidirectional publicity), and that freezing of ideas and partitioning of people works down into the parishes and will affect even pastoral work. The flexibility of the Church could be subject to some other oversight via a cumbersome process of delay and chatter, rather than the present situation of chatter. The force of the argument about what is shared, and what is not shared, should be enough rather than some document and process of centralisation. The recent result of such a process with Dr Katherine Grieb is not exactly truth-observing and edifying, and this comes before a Covenant is in place, but involves the arrogance of expectation that it will be in place.
Posted by Pluralist (Adrian Worsfold) at 01:42

Adrian, thanks for calling attention to the close votes in so many dioceses. Rowan presides over a divided church, and yet he wants to arrogate to himself further authority and responsibility to preside over a divided Anglican Communion. How do his actions with respect to the covenant make any sense at all?

I doubt that there is one church in the communion that will not be required to make constitutional and canonical changes upon the adoption of the covenant. In the Church of England is the added complication of establishment. Does Rowan think the complications will be glossed over? Are MPs paying attention to the possibility of conflicts?

In claims the Covenant amounts to nothing, they try to get around the potential that it is illegal, and then they claim the Covenant is something with consequences. That it is a mess and muddle should be reason to ditch it. If adopted it ought to receive legal challenge. But yes MPs can get in on the act (pun there) too.